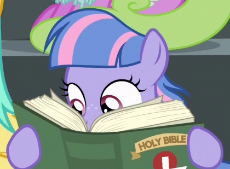 Bible Study Thread
Tue, 16 Feb 2021 23:01:15 GMT
6185f67
?
No.3411
3415 3480 3496 3810 3824
[Reply] [Last 50 Posts] [Last 100 Posts] [Last 200 Posts]
IIT we discuss and study the Bible. I will be using the King James Version and will take the stance of a fundamental literalist, which is a bit redundant, but these days there exist many that claim to be fundamental but reject the literal interpretation of Scripture when they encounter something they don't agree or understand. I am not a Bible scholar, I'm not a pastor, I don't currently attend any denomination's church service. I'm just an anon that really like to study the Bible. Feel free to argue with me, I could be completely wrong and I hope to learn more about the Bible along the way.

I will post below my first study topic and what I have researched about it. Hopefully it will be interesting and somewhat engaging. 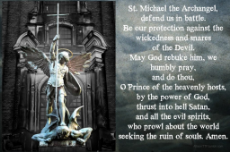 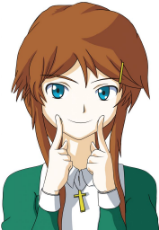 >>4525
God approves it.
biblical rapture & revelations
Anonymous
Thu, 11 Nov 2021 03:09:14 GMT
830faac
?
No.4545
4546 4547
You know, I've been thinking, with the rapture seemingly rapidly approaching...
the west (USA, general area) is not really mentioned in revelations at all, not even indirectly to my knowledge. There are still things said that apply globally, such as the various curses and such that affect all seas, land, and various other things.
One of those things mentioned early on in the book of revelations is famine, war, and death (1/4 of the global population specifically mentioned) from one of the 7 seals broken by Jesus.
I'm wondering if 'the west' isn't mentioned because it will be so far gone in recession that there is nothing it can do.

The other thing that I sometimes entertain the thought of is Texas pulls out of the USA union with some other states, and becomes one of the two countries that the antichrist obliterates early on in his reign. Though at the rate things are going, that's going to be poland and hungary... maybe. Unless those are still counted as one country under the EU, with the EU being defined as one of the 10 kings giving the antichrist power. 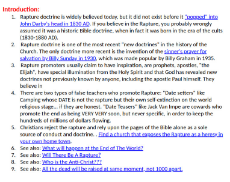 >>4545
>rapture
You may want to do a further reading.
https://www.bible.ca/rapture.htm
Anonymous
Sat, 13 Nov 2021 21:40:42 GMT
d9fccbe
?
No.4554
>>4546
>>4547
Incorrect. This is a biblical position that is backed by direct Scriptural references. We can see references to this in 1 Thessalonians 4:13
13 But I would not have you to be ignorant, brethren, concerning them which are asleep, that ye sorrow not, even as others which have no hope. 14 For if we believe that Jesus died and rose again, even so them also which sleep in Jesus will God bring with him. 15 For this we say unto you by the word of the Lord, that we which are alive and remain unto the coming of the Lord shall not prevent them which are asleep. 16 For the Lord himself shall descend from heaven with a shout, with the voice of the archangel, and with the trump of God: and the dead in Christ shall rise first: 17 Then we which are alive and remain shall be caught up together with them in the clouds, to meet the Lord in the air: and so shall we ever be with the Lord. 18 Wherefore comfort one another with these words.

There is a literal going up into the air, what we understand with the terminology of rapture. This is further reinforced in Revelation 14:14-16, a reaping of the harvest of the earth, what Christ refers to in Matthew 13:37-43
37 He answered and said unto them, He that soweth the good seed is the Son of man; 38 The field is the world*; the good seed are* the children of the kingdom; but the tares are the children of the wicked one; 39 The enemy that sowed them is the devil*; the harvest is the end of the world; and the reapers are the angels. 40 As therefore the tares are gathered and burned in the fire; so shall it be in the end of this world. 41 The Son of man shall send forth his angels, and they shall gather out of his kingdom all things that offend, and them which do iniquity; 42 And shall cast them into a furnace of fire: there shall be wailing and gnashing of teeth. 43 Then shall the righteous shine forth as the sun in the kingdom of their Father. Who hath ears to hear, let him hear.

And again in Matthew 9:36-38
36 But when he saw the multitudes, he was moved with compassion on them, because they fainted*, and were scattered abroad, as sheep having no shepherd. 37 Then saith he unto his disciples,The harvest truly is plenteous, but the labourers are few; 38 Pray ye therefore the Lord of the harvest, that he will send forth labourers into his harvest.
Anonymous
Mon, 15 Nov 2021 16:01:29 GMT
e211fe2
?
No.4558
4559 4560
I've been thinking, in revelations and daniel, there are 10 "kings" that give power to the antichrist. What if those kings are actually CEOs? A CEO is probably closer to the kind of rule a king had back in the day anyway.

One of the things that is going to happen is God is going to utterly smite and destroy a central trading city used by the entire world. If USA is so far gone in recession like its shaping up to be, then what is left that can be considered a central trading hub for the world?
Dubai? It is already considered the richest city in the world. I don't know how much general trade goes on there though, or if things are moving in that direction for Dubai.
Right now I would still consider it to be new york simply because of the stonk exchange. However markets are getting ready to implode because of the impending collapse of the USD and government lockdowns over a fake virus.
Are there lots of people in Dubai doing crypto currency trading?

Remember, the tribulation only lasts 7 years. If USA collapses economically and puts the global trade focus on the middle east (or somewhere else), it would be much longer than 7 years to rebuild what was lost.
[Reply] [Last 50 Posts] [Last 100 Posts] [Last 200 Posts]