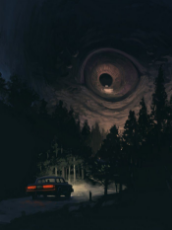 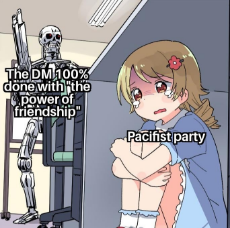 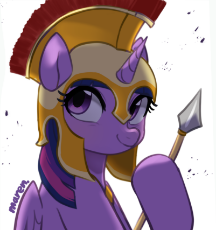 I made this discord server community with the intet to connect all roleplayers across the extended /mlpol/ community to generate content and find players:
https://discord.gg/SvvxKYECcF
I was hesitant to announce it on this board because I'm still working on an expansive west marches game project that I had hoped the whole community could partake in and I didn't want to disappoint people with early announcements (and end up like Cyberpunk). Still, if anyone wants to get involved in developing or just casually talk about pony-roleplay, feel free to enter it.
I might make a thread about the game project later, or earlier if anyone wants it. I was going to make it a multi-media project to incorporate mumble and matrix in addition to ths board, but I'm still in the writing phase.
Anonymous
Sat, 25 Dec 2021 00:09:57 GMT
0ac5f65
?
No.156440
File (hide): AA685AB57C8D52085A132B7E3B500FD1-655629.png (640.3 KB, 706x561, shrek_was_still_hungry.png)
[Bing] [wait] [Tineye] [Yandex] 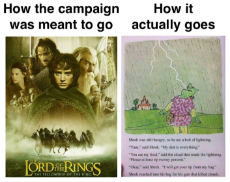 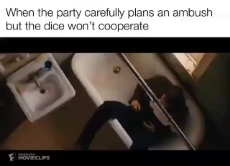 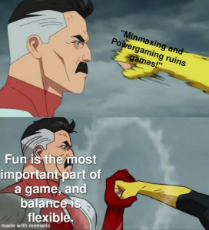 >>165361
I would say that's more to do with detatched normies who enter the hobby through influence of youtube, crit role, or stranger things because of snowballing popularity than anything else.
Blaming that on people who actually enjoy the power fantasy aspect of the game or take time to gain knowledge and mastery of the system is just fingerpointing, because those players have visible interest in playing the game. Every table is unique, and players can have fun in different ways as appropriate for their table.
Anonymous
Wed, 03 Aug 2022 16:35:59 GMT
f592031
?
No.165365
165366 165367
>>165364
>pic
Yes.
The most direct way to maintain the hobby/table/group is to keep it at the second (or first) stage.
Applied Pressure.
The next option is filtering potential people who would join who would already have the stuff that makes the heart of such a group.
Gatekeeping.
Another option is to have the behavior(s) replicate.
Anonymous
Wed, 03 Aug 2022 21:02:49 GMT
fd2bc1b
?
No.165366
>>165365
What behaviors?
Anonymous
Wed, 03 Aug 2022 21:58:36 GMT
fd2bc1b
?
No.165367
165368
>>165365
>keep it at the second (or first) stage.
This isn't really realistic if the hobby itself changes with editions, particularly with d&d. D&D has rebranded itself multiple times over the past 50 years with the intent of attracting new audiences.
Of course, you could always just play the old versions of the game, but that doesn't last forever either.
At this point, D&D is at stage 6 (hobby is casualized to appeal to a wider audience). It's been at stage 6 for the past 6-12 years, and it can't really be reverted at this point. People who say they want to gatekeep 5e communities to keep the 'normies' out are kidding themselves.
Despite that, I still consider ttrpgs to be worth playing with the new generation. I play with old groups and new groups.
>The next option is filtering potential people who would join who would already have the stuff that makes the heart of such a group.
Naturally, although you can only filter players at your own particular table. That doesn't prevent new people from entering the fandom/hobby as they please. Teenagers buy books and play games with their friends on middle school, like the book tells them to. Trying to gatekeep it on a fandom-wide level is kind of a moot point.
Anonymous
Wed, 03 Aug 2022 22:45:49 GMT
02b04ce
?
No.165368
165369
>>165367
You're right, it has rebranded many times. What edition did you start with?
Anonymous
Wed, 03 Aug 2022 23:18:27 GMT
c063fec
?
No.165369
165370
>>165368
3e, although I play a bit of 5e with my friends and also some 2e games. I've actually grown quite partial to 2e, although some of the nonweapon proficiency rules feel a little dated (still better than 5e's tool and skill systems though).
I've really gotten into Pathfinder as of late (both editions). I enjoy Chaosium too. I also want to play more GURPS and Savage Worlds, but I've been too busy to give those the attention I wanted.
Anonymous
Wed, 03 Aug 2022 23:26:30 GMT
02b04ce
?
No.165370
165371 165373
>>165369
Ah. Well. I started with DnD (editions what?) so you'll forgive me if I give less weight to your testimony. Not to say its invalid, but that youre operating from a much more narrow frame of reference. Not an argument, I know, just saying.
Anonymous
Wed, 03 Aug 2022 23:38:40 GMT
c063fec
?
No.165371
165374
>>165370
From my experience, being in the hobby longer does not always translate to better players...
Especially when they try to apply things they considered normal for an edition of the game 30 years ago in a community around that edition that dissolved 15 years ago to modern players and their rendition of the game. Different versions of the game and different generations of people who play it are profoundly different from one another, and for those who played older systems to assert behavioral authority over those who play a newer system is really just absurd, because the ones who play the new system will have just as much if not more relevant experience as they do in the current system.
I dunk on 5e players a lot, but that's mostly because I think the system is poor quality, not how they choose to play it or enjoy it for themselves; I don't go as far as to imply that they're bad at the game. Considering 5e is a tertiary system for me, I consider anyone who plays it more often than I do to set the standards for appropriate behavior in that game at their tables.