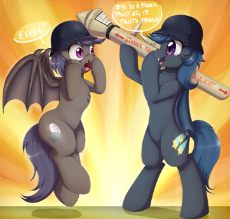 Occupied Equestria
Anonymous
Tue, 08 Jan 2019 09:02:49 GMT
bdwcn
?
No.81000
81004 81006 81341
[View All] [Last 50 Posts] [Last 200 Posts]
Occupied Equestria: set six years after season 6, it presents an alternative history where Chrysalis chose a different approach to her second attack on Equestria. The Changelings have conquered half of Equestria, while an Equestrian splinter colony - soured to Princesses notion of harmony with all creatures thank to their dealing with griffins - Invaded and took the other half. In Baltimare and the Equestruan Southlands, the magic of friendship has weakened, as Communists, Changeling infiltrators, Fascists, gangs, and even ancient necormancers and dark gods threaten the city and the surrounding regions. This role play is based in large part upon the Equestria at War mod for Hearts of Iron 4, and uses D&d 3.5e mechanics.

In this latest episode, the crew has united once again, and returned in full to the catacombs under the Curwhinny farm. What old secrets they will unearth, whether they will survive without being turned into undead monsters... whether Silver will ever get paid... will be determined in this thread.

>>82915
Idk, love isn't really a zero-sum game normally: I don't really see how giving love to someone else could be detrimental in the show, but this world is also obviously much more scary than FiM, since it's d&d with gunz.
Idk how Changelings would work though, aside from fan-canons. They clearly have the a Sustenance ability in which they don't need to eat. It's possible that they might be able to recover hit points by feeding.
There's also the option of giving them abilities similar to vampire's or Succubuses: Energy drain:
>Succubus powers, because they're so similar; changeling is a G-rated succubus
https://dnd-wiki.org/wiki/SRD:Succubus
Energy Drain is a really bad news, and it's much more deadly and sinister than the powers of the G-rated changelings in the show.
Another thing to note about Changeling love-feeding is that only Chrysalis expressed the power to grow stronger by recieving love, like when she seduced Shining Armor. No other Changeling has expressed that sort of ability boost. Changeling queens must have some kind of ability or technique in that they're able to siphon love and convert it into power for spellcasting. Perhaps you could relate it to how a Devourer's spell-like abilities are augmented while it's trapping a soul, only the queen instead applies automatic metamagick to the spells she can cast (as if she possessed several metamagick rods). I think other Changelings may restore hit points from love-feeding
Druid Dragon-Lion-Deer-Horse
Sun, 13 Jan 2019 18:05:44 GMT
7aT9u
?
No.82917
82919
>>82916
Of course, I'm not the one making the rules here. GM will decide how he wants to fluff them in the game. 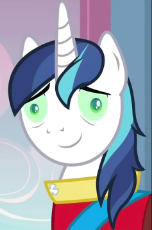 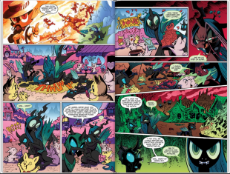 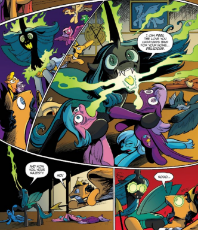 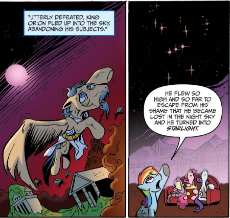 Whether or not love is a zero sum game, Changelings are definitely creatures that see it that way, which is kind of the whole point of race in the show. They are not simply given love, they take it. When we see Shining Armor in a Canterlot Wedding, he is extremely tired and has severe headaches. He is unable to cast spells. Eventually, he is left unable to do much of anything. He stares forward with a thousand yard stare, he does not seem to notice his wife or sister talking to him, all while he is clearly awake. Of course, this seems to be caused by a mind control spell as well as the feeding, so we can’t say that this is purely the result of feeding, but I cannot see how he is better off than if he had been energy drained. He looks to me like he can neither think nor feel.

In the first comic to feature Changelings, we see them eat and basically destroy a civilization of loving kittens. I’m not sure how this could possibly be interpreted other than deadly. In a later comic, we see more feeding on ponies. They seem to be able to do it voyeuristicly, able to feed off of love that is expressed at something other than the Changeling itself. The feeding has a green energy go from the pony into the Changeling’s mouth, or maybe horn where applicable. It causes the host pony to collapse to the ground. We also see Chrysalis disguise herself as the fiancé of a Pegasus named Orion. When he expresses love towards her, he feeds on his love to the point that it “reduces him to a husk.” He is visibly weakened after this, appearing emaciated and physically aged. Rainbow dash said that he thereafter “flew so high that he became star light.” Both Twilight and Chrysalis say “that isn’t what happened to him,” but the latter says she likes Rainbow Dash’s telling of the story more than the historical fact.

We know from the show that feeding a Changeling can be a asymptomatic. Shining Armor and Cadance openly let a starving drone feed from the love that emanates from their child (this scene kind of bothers me. I can image exposing your neck to a vampire, but offering your child just seems like a risk a parent would not take). The feeding itself is off screen and very loud, I think for comedic effects (a fan comic showing bone-crunching sounds felt appropriate), and does not harm the child in any way at all, not even dampening her mood. We learn after the fact that the experience was more filling for the Changeling than normal feeding, presumably because of the altruism of Cadance and Shining Armor. This implies that the more voluntarily love is expressed towards the Changeling, the more nutritive value it has.
Anonymous
Sun, 13 Jan 2019 21:09:29 GMT
U0Gp7
?
No.82931
File (hide): 80D5A78C5EA5FC33F2C671A87EAD6818-2018483.jpg (1.9 MB, 1800x2550, 203226DB-3FD3-499E-A7F3-465F1157093F.jpeg)
[Bing] [wait] [Tineye] [Yandex] 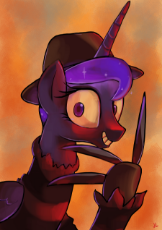 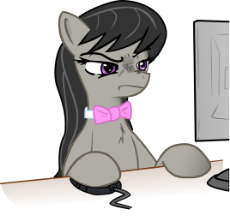 >>82935
Goddamn it, no one except for you has said that Silver is captured. Like how is that even possible? How do you meaningfully capture someone in a dream? Stop making things up, you are not GM

>>82939
I'm not giving regular characters or NPCs freaking Succubus kiss. Changeling feeding would be limited to quasi-voluntary interactions to nerf the power

Sister Ash spends the next few minutes explaining how she was called to clear the cellar of u dead, and the time she spent at the Cathedral reposing the jars.
Also, Sister Ash is an adult. Druids start at complex age, which means she's at least 18.
Iron
Sun, 13 Jan 2019 23:05:47 GMT
41OWR
?
No.82955
>>82954
>>82953
Nice AND legal
Can't seem to have naps these past few weeks
Iron chuckles. "What a fire it was. Thankfully, no one got hurt."
Anonymous
Sun, 13 Jan 2019 23:09:11 GMT
bdwcn
?
No.82956
82957
>>82954
These are nuns circa 1940 we are talking about. Not libertarians who think that anything two+ consenting adults/animals do is acceptable. Not sexual positivist social liberals. Prudish as hell celibate nuns from yesteryear who think that sex out of wedlock is immoral. They don't care if she is 'of legal age,' they care that she is not married. If you want NPCs who won't judge you for extra-marital sex with random guys, join the Social Democrats. Conservative factions have conservative values on sex and liberal factions have liberal values on sex. Shocking I know

“Then it sounds like we are united in purpose. Pay unto the ‘reformers’ and ‘progressives’ every ounce of pain they have delivered unto us. With interest. In the meantime, try to make a little home of our own in the Autonomous Zone.“

>>82986
Alright, so let me see if I am understanding this correctly. You believe that Changelings have been watching and take a special interest in this old guy, and they followed him to a bar in the middle of a city. They then decided to move on when he was taking an afternoon nap, invade his room, knock him unconscious, drag him out of the room, drag him outside of the tavern - all in broad daylight - and then transport this unconscious pony all the way to where ever they apparently have long term storage. They do all of this when the closest Changeling controlled land is at least 400 miles away by air or land and 600 miles by sea, and the Changelings have 30 million pony and 10 million reindeer subjects they could eat instead. They decide to Shanghai a guy that way rather than having a disguised Changeling ask younger stallions with more vitality to sign up for a ship’s crew, or send out a Changeling disguised as a mare who charms a young and not-68 year old stallion into coming back with her to a bar that is secretly owned by changelings, drugs him, and then asks him to come to a “back room.” Indeed, they choose to take silver During the daytime when if they wanted him specifically they could wait until night, so they would have cover of darkness, and dragging an unconscious stallion through the streets would look like just helping a passed out drunk friend.

Am I understand you correctly?
Silver (OOC)
Mon, 14 Jan 2019 01:09:35 GMT
C3j7I
?
No.82989
82990
>>82988
Well, I don't have anything else to go by considering I didn't hear a peep from you after I replied. Yes, I get it, it sounds fucking ridiculous. But I have nothing else, because I'm not the GM and I have absolutely no idea what your plans were or what you were going to do.
Anonymous
Mon, 14 Jan 2019 01:20:40 GMT
DgXD5
?
No.82990
82991
>>82989
First off, if you replied I must have either missed it in the stream of posts or put a pin in it thinking I would get back to it when whatever problem I had with my thought process was resolved, and then forgot about it. I did have something planned for Silver, but it would have been a set of images tailored to Silver’s particular concerns, interests, and fears, rather than a simple “YOU’RE FUCKING MINE NOW.” It would have had changelings as minor features in the background. It would not have focused on them, nor would Changeling involvement have been anywhere near as extensive or as intimate as it was with either Dark Star or Iron’s dream. They would not have been the centerpiece.

"Last thing I remember after I was sweeping the porch, I was being loaded into one of those infernal smog machines." Sister Ash replies
"I wanted to come back to show them I hadn't died, since I left without a word."
She once again ties back her mane into a bun.
"We won't be meeting the other until the evening. In the meantime, I would like to get some work done around here, and get s better description of the foals still missing." She continues
"I'm not even sure what exactly they look like; I think it would be helpful if I brought back a picture." she says.
Druid Dragon-Lion-Deer-Horse
Mon, 14 Jan 2019 02:05:58 GMT
7aT9u
?
No.82993
82994
>>82980
Come on, m8.
I'm not saying you should assume your character will never die, but you've been acting like you expect the worst at every moment.
I think you can trust the GM to accurrately describe/foreshadow any given event that's has a high chance of killing/capturing/incapacitating your character: If he's actually fucked, it will be a lot more clear than this.
Silver (OOC)
Mon, 14 Jan 2019 02:12:35 GMT
C3j7I
?
No.82994
82995
>>82993
Of course I expect the worst at every moment. I'm not good at this like all of you guys are. 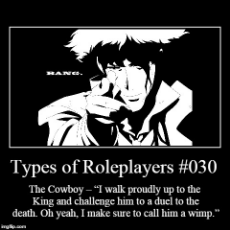