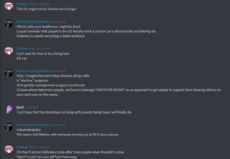 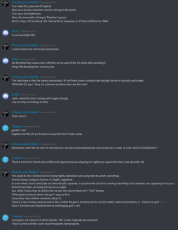 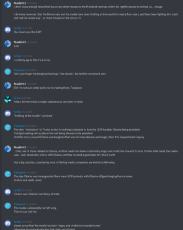 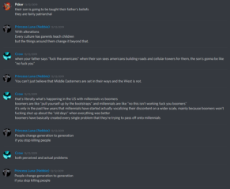 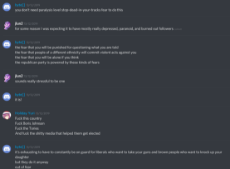 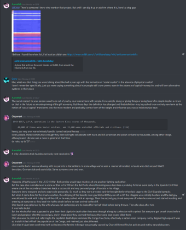 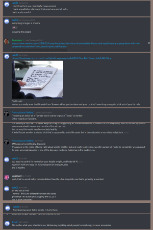 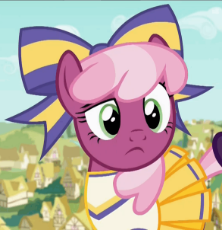 What server is this?
Is it owned by DB or just a fan server?
Who are these people? Just random users or mods?
What's their DB Profiles? And if those are known, is it possible to get access to their irl social media?

Posting 10 discord Screenshots of random people having bad opinions is hardly interesting for the onlooker if you don't present a better frame of reference or what you plan to do with this information. 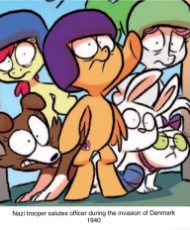 >>14583
https://derpibooru.org/pages/discord
I'm banned from this group since months, it was shit. Mods knows they can drive any political topic in their favor, no one is dumb enough to oppose their views and earn a bad rep or a ban.

so this is in actuality the official DB community server with the actual site mods? Jesus Christ.
Somehow i am not surprised. With all the shit that went down in this place for years. Still, it is utterly disgusting and once again proof that DB is not only not apolitical but also follows a radical left agenda that allows Mod Abuse.

Teaspoon/TheSmilingPony is an Anon from Texas, and Byte░'s powerword is Liam White, no other info.

what a minute, Teaspoon is SmilingPony? As in the owner of this whole shitsite?

wow. Ive been looking for this cunt to get his own cow thread for years now. This is even worse than i thought.
Anonymous
Mon, 23 Dec 2019 10:11:22 GMT
No.14588
14589 14600
>>14584
I was thinking that we could maybe brigade the chat with burner accounts and have a decently redpilled (though not overtly so) conversation to frustrate them, as individual dissent gets rapidly swarmed. However, that wouldn't work with cuck mods.
Gathering intel on (((who))) runs DB and manages back discussion in particular probably is our best bet. 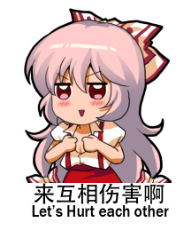 https://encyclopediadramatica.se/My_Little_Pony - (as far as i can tell no MLPOl related content was to be found on the whole site)

ED is in bad shape for some time now. The site is mismanaged, poorly staffed, suffering from general low quality. and the israeli kike that owns and runs the site cant be arsed to put real work into it anymore and basicly just lets the car run against the wall for some time now. Much like the CWCpedia, whos basicly on kiwifarms life support now.

heres a video covering some of the problems ED has, in particular their (now dead) youtube channel. they lost the media competition to kiwifarms. 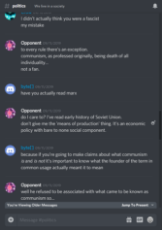 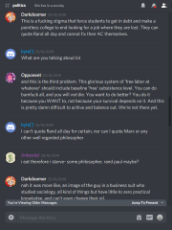 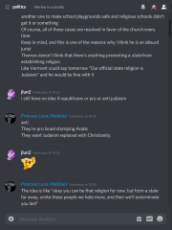 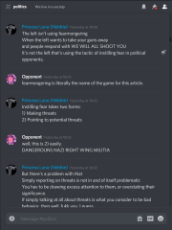 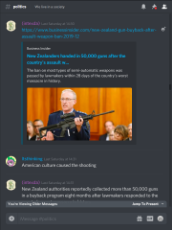 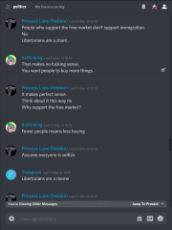 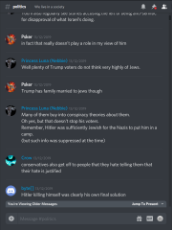 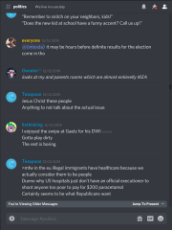 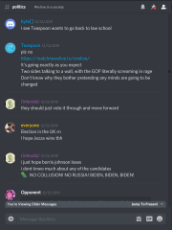 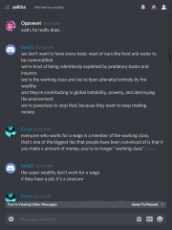 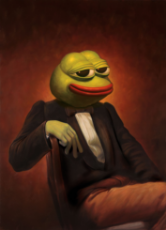 You don't even need a burner account to post on the forums, just use a different device, and don't waste it, don't get caught, they are easily to dismantle..
Or use a burner account and make a fresh profile if you don't want problems as a user, keep devices separated because they run scripts to identify your machine or signature... But again from a different access point, IP or using your phone. Derpibooru generally never sends any confirmation e-mail.
Anonymous
Mon, 23 Dec 2019 15:04:30 GMT
No.14596
14599 14603
>>14590
>>14591
>>14592
Are any of them /leftypol/ or are they too degenerate even for that? 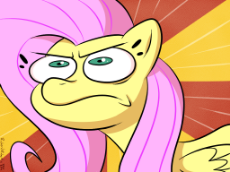 >>14596
That's my idea, to sneak in and weigh in, bringing constructed argument, being smart, not aggressive at all.
You'll see how they react. Mikey, AaromMK and Itsthinking are essentially repeating what they read on the MSM.

But it's hard to even find a guy who will support and advocates a global marxist ideology while trying to act cool. I'm gonna give it a try, despite my >pending duck status.
Everyone who is persona non grata is given this badge and labelled a troll. 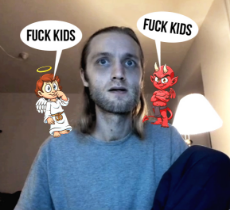 Personally, i made positive experiences with documenting cow drama here on /sp/. Since this campaign is politically motivated and concerns ideological enemies of the whole site who have been suppressing our community for years now i can see while doing this with a more sitewide focus can be relevant. But this will be for the people doing the gay OPs to decide who actually harvest information that will be documented here. We are not limited by any external rules or moderation. the only limit is Anons own creativity.
Anonymous
Mon, 23 Dec 2019 18:16:10 GMT
No.14616
14625
>>14603
I get that, but I think OP is just a guy who had enough of seeing Derpi mods and staff, the one community site and art host we have, being controlled by complete dickwads.
I am /mlp/. I am Derpibooru. I am /mlpol/. So all of us here are. As an artist, I find unacceptable these guys use their status to push down anyone who expresses their views. I never wanted to care, we had this topic since years on /mlp/ on /pone/ on DA and others.
...Yes it's just an art host. WE made Derpiboporu. We make the content, they host it, run their ads... They do make profits, TheSmilingPony, Nebu and the staff should be glad we are here, and proud to have us. their role. 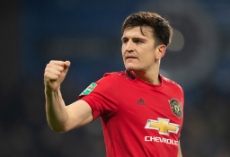 >>14625
there's a lot of artists who don't share their views, so are the advertisers.
This is simple, we dig up info for all to see who they really are, post them on big sites, and then ask the people donating or advertising on derpi what they think of that.
it's just information. This is what the leftists does all the time against us, to deplatform others (like the SleepingGiants and co. does everyday)

Like them. We are Anon, but post screenshots to like, the Wukii comics fans, engage in a public discussion about TSP and so on.
Get on facebook/twitter. aim the normies, normies loves drama, but also, only a smal part of the bronies are essentially left-wing.

TSP and co spit on anyone who's not with the hard-left, so... 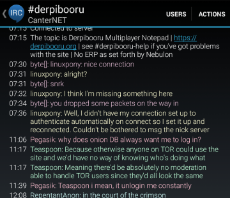 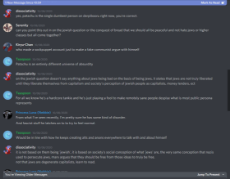 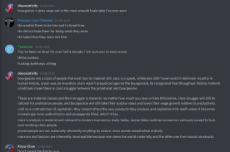 Just how the mods use gaslighting on users on a public forum without even trying to hide it is mindblowing.
Might upload some more screenshots from the The End of Derpibooru thread so they are archived there. 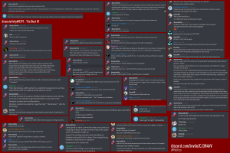 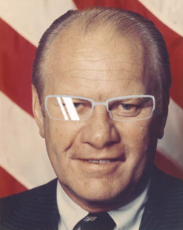