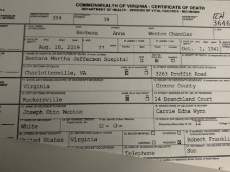 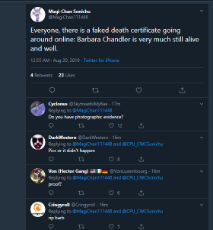 This event is unconfirmed by third parties and was denied by Cwc via a sock account on Twitter.

No proof of life was supplied. A Cwc detractor server suspects Chris is lying. One reason being the announced post death Kiwifarms house raid.

Will post more later if this turns out to be real. 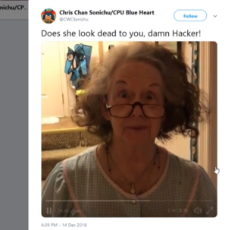 no definitive proof of barbs passing or living yet

detractors are leaning towards dead and chris being in denial.
its being considered to visit the house or calling cwc. 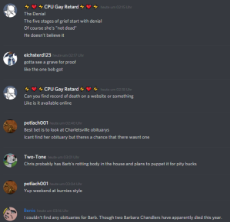 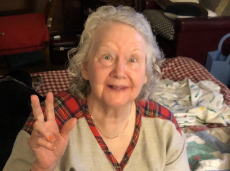 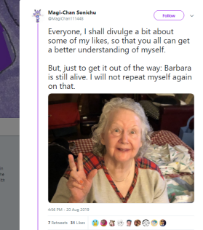 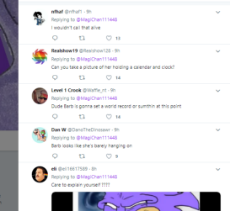 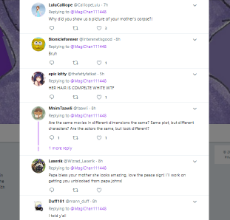 IF this photo is not a fraud and Misses Chandler is in fact still alive, it is expected she will die any month now. Be it from illness or accident. If you had any plans to raid CWCs house, i recommend to wait or for this proof of life to be falsified.

Link to the Twitter Thread, posted on the same sock account that denied the death certificate as fake.

>barb chandler appearance on a CWC twitch stream, circa late 2017 to April 2018.
https://www.youtube.com/watch?v=iFpCOSjCqt8

>Barb on making autographs for the CWC shop
https://www.youtube.com/watch?v=S5DVU0NjoE8

It should be noted that CWC is effectively puppeteering Barb, with him directing her sentences in every staged video. Barb seems barely aware of her surroundings. It is unknown if and how CWC abuses her. considering his past behavior with online acquaintances and his slipping grasp of reality anything is possible in a realm between beatings and rape. (CWC has expressed interest in having sexual intercourse his Barb in the past.) 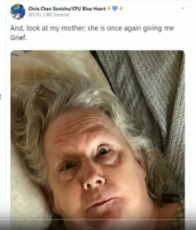 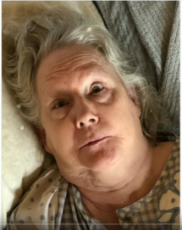