I was thinking about what I might say in a debate against a leftist if they were to accuse me of being a sexist (racist, nazi, etc. will also apply to this but I was thinking about the accusation of sexist in particular) and I found that my response was derisive and not quite mocking. When I realized this, I began to think about how they and anyone that was listening would respond to this, from the point of view that my audience was generally left-wing. Than it hit me: this is how we could win!

Hopefully some of you guys have heard of The Distributist's "Magical Words", words such as racist, sexist, nazi, xenophobe, etc. These are word traps: if you say that you are not a nazi, they can simply say, "That's what a nazi would say!", and if you embrace the identity, no one will listen to you and you will be discarded and removed from the argument. The way we can get around this trap is to simply avoid it. It's all rather simple. All you have to do is treat their accusation with derision and say that they are lying. Also, make sure you throw in an insult in there. It doesn't have to be a good one, and make sure you don't insult them too much. Your goal is not to get in an argument of verbal abuse. In this manner, you have sprung their trap without stepping in it. They can respond in four ways: by doubling down and asking you to 'prove' that you are not a nazi and/or saying that you are lying, claiming that they are not a liar, insulting you in return, or asking why you have insulted them. It should be pretty clear that most of these outcomes are an immediate victory for you, or at least give you the upper hand.

The next option is to claim that they are not a liar. This gives you an opening: if they are not lying, they must be an idiot or insane to accuse you of something like this. Laugh at and deride them. After this point, they will realize it is not working and transfer to another one of these responses.

The third option is for them to insult you in return. While it might seem like your goal is to get into a flame war based on these tactics, your actual goal is to deride all accusations/emotional arguments that your opponent makes. You let them set their trap, and if you spring it without getting yourself caught, they will end up embarrassing themselves in front of their audience and looking like an illogical fool. Therefore, if any of these responses eventually lead to an insult war, your goal is to stop it as soon as possible. Make it clear that you are the logical one, they are the one who insulted you first after all. If you treat their accusation like an insult and steadily escalate the language, you make it clear that you are not the one who started it, nor did you freak out. If you bring the debate back under control and into civilized territory after this, it will further you towards your goal by making you look much more mature that your opponent.

The final option is for them to ask why you insulted them. This is the response you might expect from a 'polite' debater like Shapiro. It is rather simple to counter, just say that them accusing you of such a ridiculous ideology is an insult itself, and they started it. Make them look unaware of the potential consequences of their accusations, and extrapolate that to them being unaware about how the world actually works.

You get add bonus points for each response if you make your opponent look malicious or dangerous for accusing you of these things.

By now you must be asking, "why is it some important to insult and make a fool out of your opponents?" Well, think about political cartoons and meme theory. Political cartoons have always created to represent the writer's political opposition as fools, and one of the main reasons we won in 2016 was because we were about to create millions of images and videos that derided our opponents and made them look like fools, and spread that content all over the internet, so much so that even boomers saw them. Unfortunately, we have separated into disparate media networks, and that no long works. Therefore, we must seize control of social interaction. Debate people, talk with anyone you can. If we can make it socially nonviable to make emotional arguments, this will immediately give us more support from women.
Make sure you NEVER respond in a derisive or insulting way if your opponent offers a logical argument. The whole point of this is to push the window of discourse away from accusations and emotions and towards logic. As long as we debate them through the use of logic, we will inevitably win.
I would like to address how your opponent might go about accusing you of something. If you are in an actual civil debate, they will not scream 'You're a nazi!", instead, they might just try to ask, "Are you a nazi?" or "That sounds like something a nazi would say." From here, you must take the initiative. Put words in their mouth: Make it clear that you believe they are saying you are a nazi. If they say, yes, they think you are one, proceed to do what I have already suggested. If they insist that they are 'just asking!' make it clear that the suggestion that you might be a nazi is ridiculous, and say that they are poisoning the well. They will probably try to insist that they are just asking a question and that you should answer, DO NOT. Make them look malicious and force them to give up or else you will quit the debate.
If you are actually one of those -ists, I don't care, but they do. Do not admit it, they will never listen to you if you do.

I know I am probably not the first person to think of this, and there are more ways to accuse you and for them to respond to your responses, but this should cover the most common responses.

Social justice = Affirmative Action 2.0
Gen-Xers and normalfags of that age remember the bullshit that was affirmative action. If you get questions about social justice, call it out as this.

Male Mother-In-Laws (Alternatively, Male Karens)
Heard these while gaming, it's an amazing analogy for Beta Males and emotionally-dysfunctional feminist men. Pick whichever term you want, but either term should be sufficient enough to describe men with no masculinity.

Six-Million Europeans (AKA holocaust victimhood fraud)
It's insane to think that someone can systematically fake industrial-scale human suffering. Normalfags hate the idea of the holocaust being faked. However, it's much easier for a vocal minority to take credit for torture they never suffered.

Everyone suffered in WWII, the truth of those who experienced real pain under a blanket of hysteria and war should be revealed as such.
Anonymous
Wed, 13 Jan 2021 23:29:40 GMT
414c181
?
No.298394
fortunately, the "right wing", being more independent and mentally and physically healthier, have less of a hard time being socially outcasted, alienated, and ostracized than leftists.

Leftists are inherient followers, so without social recognition and acceptance by their peers, they will lose their shit in fear. Most of this recognition and acceptance derives from the attitudes of the political ruling class, aka the most influential rich jews. To simply break this spell that leftists have fallen into, you must address these fundamental points they hold:

>b-but the most educated people are liberals!!!
While the elite universities tend to be majority liberal, the top 5% graduates with the highest acedemic success end up voting republican and hold conservative views. Its the professors and the people who stay in the universities as their career who end up becoming shitlibs.

>b-but muh experts!, muh peer review! muh consensus!!!
Unfortunately the only "science" that affects our day to day lives are the historical achievements of science, which of course is credited to only the 1-2% of top achieving scientists. The other 98% of scientists dont actually affect your life much differently, theyre basically a waste of your tax dollars. On top of that, most experts have just as worse prediction power as non experts, "peer-review" studies themselves show the peer-review proccess to be garbage.

Ponerfrens, much of decision-making is based upon feelings, about 7/10ths of it, to be exact. Picrelated shows that whatever you're trying to convince normies of, and even fellow aspies, you have to make them feel as though their feelings are being heard (careful with the women on that one, they're pretty manipulative). This is not possible with very many of the normals, as I'm sure you are all very well aware of. Some people are simply not open to listening to reason, that's okay. There's lots of other people out there that might be willing to listen instead, move onto talking with them. Much more efficient use of time and energy.
Written from the perspective of a rationalist scientist, for an audience of the center left in 2012, author Haidt was forward-thinking enough to see that a big split was coming in the culture war of the US, and tried to warn people of it just as it was starting to spill over into the calamity that we see today.
Lots of interesting findings in there, for example he put together the effort to show that rural folk in Brazil had more in common morally with the American working class than either had with city dwellers only a few miles away. If you want to lightly redpill people, it may not hurt to learn from what might be one of the best. 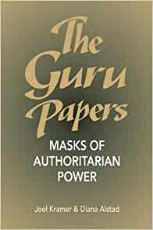 >>298624
Thank you anon, this looks to be a good read. By re view it seems to touch on or parallel a personal favorite of mine, The Guru Papers. Highly recommended.

>The Guru Papers demonstrates with uncompromising clarity that authoritarian control, which once held societies together, is now at the core of personal, social, and planetary problems, and thus a key factor in social disintegration. It illustrates how authoritarianism is embedded in the way people think, hiding in culture, values, daily life, and in the very morality people try to live by. The book unmasks authoritarianism in such areas as relationships, cults, 12-step groups, religion, and contemporary morality. Chapters on addiction and love show the insidious nature of authoritarian values and ideologies in the most intimate corners of life, offering new frameworks for understanding why people get addicted and why intimacy is laden with conflict. By exposing the inner authoritarian that people use to control themselves and others, the authors show why people give up their power, and how others get and maintain it.
Anonymous
Mon, 18 Jan 2021 16:31:04 GMT
83b7f7c
?
No.298843
>>298624
Thanks anon.
[Last 50 Posts] [Last 100 Posts] [Last 200 Posts]
7 replies |  3 files |  7 UUIDs |  Page 7
[Go to top] [Return] [Catalog] [Reload] [Archive] [Update] ( Auto)