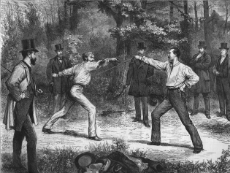 This being mlpol.net, it would only make sense to have the game be Them's Fightin' Herds, come to think of it. Too bad I suck at fighting games, maybe this could be my shot at getting better.

Think about it, if some faggot is still hiding behind their keyboard after getting called out all you really have to say is "Tits or GTFO." Entertainment for everyone, gallantry of anons' honor on full display, what's not to like. 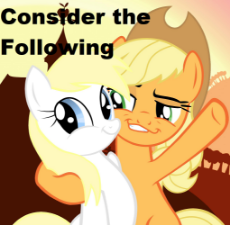 >>146954
That's certainly a fair criticism. I figure that settling on one game could serve to mitigate it to a degree, if everyponer happened to be on board with it. As I've mentioned I myself have never played TFH, nor have I even ever been good at fighting games in general, and would likely get über-pwned at this point if I tried to start something, but I suppose it would be a sacrifice I would be willing to make for the perceived betterment of the community; that being that I had to learn a new game that I wasn't already very good at, and be extra careful about my words until I did so.

The problem, I suppose, that I'm attempting to zero in on and help neutralize is that words tend to be barbed where straight up traded blows aren't, as in it really doesn't matter how many times someone gets ruthlessly BTFO, they'll likely still come back and claim they've been right all along, whereas in a game there's a clear winner, no question, doesn't matter what someone's perspective is on the issue at hand. The defense that's been used so far to oust people that are clearly outsiders up until this point is horsepron, which indeed has proven effective, but not against people that are already horsefuckers, and we still can get into heated disagreements sometimes that seem to drag on long past the time it would take to get rekt in a video game for the whole of the board to see. 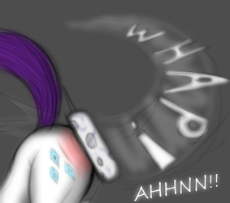 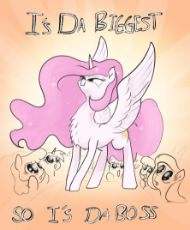 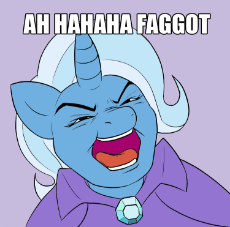 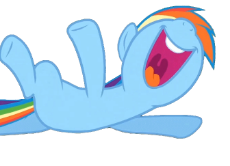 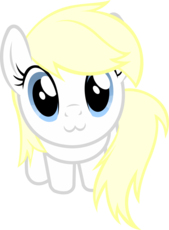 >>146950
So this idea is directly stolen from an anon on a comment related to Spike's reasoning to everyone else, how as a king all/many issues should be in song.
Using song, music, and singing (15.ai poner voices maybe) to demonstrate your points and counter points. So that the main ideas are present and why and how.
Afterwords...
Perhaps an anonymous co-authored (depending on how many sides of an issue is at play) song(s) to open new opportunities?

So that the lyrics (possible metronome and other factors maybe visual direction as well) and points to be considered is at the pinnacle of what they could be.
Breathing life into a song that has technical and logical application value as well. Memes that transcends the so called triad of meme etymology.

I'm going to try and level with you here anon. I left because your tone was rather ambiguous about whether or not you intended to try to doxx me, which is something I take very seriously, and is something that I believe an upstanding and honorable anon, given this type of situation, would immediately and unequivocally deny upon being asked about it, with no doubt left in the other anon's mind that that nothing of that sort would come of the situation; and that you didn't, to me, speaks volumes about your present character and to a desperate state of mind.
So let me be perfectly clear about what would happen if you were to get up to doing something like that, and I caught wind of it, the consequences of which behavior being listed as follows: your actions would be brought to light and you would be found out, if not that night, or the next week, or month, or year, or decade, and you would be made to pay for whatever damages might be accrued relative to what I had suffered thusly. Just so we're clear on that subject.

As for the other kinds of abusive rhetoric that you seem to think is okay of spewing whenever you feel like it due and leading to the disgrace that you've suffered, I don't enjoy lowering myself to namecalling in an attempt to resolve petty disputes online or anywhere really, which is why you've been let off easy on that one. Please note that you're contributing nothing to the well-being of the community or exchange of ideas by doing so, and are pretty much only making an ass of yourself that nobody wants to be around, but I suppose you already knew that. Still hope you get help, but that's really more for your own sake.
Anonymous
Tue, 01 Jun 2021 10:28:04 GMT
7fb307a
?
No.147270
147272
>>147269
>I dont like a thing, and you said mean words, so I think you might do a thing, and you didnt DENY you might do a thing. Why didnt you deny it? Dont you know that I think you should deny it? Well anyway you BETTER NOT or I'll find out! And I'll be mad!
Uhm, arent you supposed to be promoting vidya duels? I see you figured out how to put all your responses in one reply (so far) so kudos to you. But seriously, maybe you didnt notice, but you're the one coming up with all sorts of paranoid delusions because someone on the internet refuted your pwecious ideah.
It's pretty obvious who needs help.
Anonymous
Tue, 01 Jun 2021 12:30:37 GMT
e02e585
?
No.147271
>>147268
Don't be a nigger.
Anonymous
Tue, 01 Jun 2021 12:40:46 GMT
26ee197
?
No.147272
>>147270
Not gonna play these games with you buddy, I'm going to consider this conversation over for now. Have a good one.
Anonymous
Tue, 01 Jun 2021 14:01:13 GMT
ed62409
?
No.147274
147276
>>146950
Settling debates with videogame duels has to be the most retarded thing I've heard this year, and here's why.

Duels with swords give people a chance to get their anger out of their system, display their strength/speed/skill to onlookers, and punish those who have done them wrong. Duels with pistols give people a chance to gun down foes that might otherwise be backed up by gangs and families eager to get into blood fueds with your family/home, while ensuring the swiftest gunman in the west reigns supreme. It lets men back their words with violence and protect their reputation with violence, it lets men intimidate others into not risking duels over anything not legitimately important enough to risk your life over. Duels can end in bloodshed or simply end after a victor spares the loser. Without duels, someone can slander you endlessly with no means of counterattack beyond responding in kind, engaging in a costly legal battle (that might not even be possible if you don't share a country/legal system), hiring a private investigator to find something you can use to destroy your attacker's credibility in the eyes of the mob the attacker is sending after you, none of these options let you beat the shit out of your slanderer or kill her.

If some libtard cuck insisted whites shouldn't exist and backstabbed you in Team Fortress 2 to "prove it", would that genuinely make his jewish argument valid? If some muslim insisted his demonic Baphomet (aka Mohammed)-worshipping people are victims and Christians are oppressors and then facerolled your ass in Street Fighter V using unfair unreactable 50-50 mixups would that make his idiocy remotely tolerable by any civilized society that's worth being called rational? If some small-time gaming league was paid by leftists to "beat bullies" and kill+teabag gamers unafraid to talk about the dancing israelis, would that actually matter to the validity of any argument?

Surely you can't actually believe that. Surely, you jest.

In a rational society that prioritizes facts and logic over physical force, duels are an outdated notion with few benefits and plenty of downsides, such as the ways they can be used to bypass the legal system and let the deadliest criminals escape justice. Duels work best in societies with limited or no police, an era of Murder Warrants and "Wanted: Dead Or Alive" posters. An era where the able-bodied common man is encouraged to use force for the good of his community and the protection of its people. Not an era where this is best left to highly-trained professionals, or a corrupt era where the use of force is exclusively a privilege only the rich and their enforcers can enjoy without dire legal consequences from the revenge-obsessed jewish """justice""" industry.

There is no risk of death involved in gaming. There is no risk of humiliation in the eyes of the mainstream public as most people don't really give a shit about the finer points of hardcore gaming or what separates a clever trick from a cheap trick. A hard-working man with a job can get muscles from physical labour, muscles that would be useless trying to beat some cheap bullshit in TF2 from some NEET with nothing stopping him from dedicating almost all waking hours alive to the game, but excellent when used to beat the stupid out of some antifa NPC shouting "fashist" until he's blue in the face.

I shouldn't need to beat some twat in a game of Pokemon before he'll give logic a chance and admit the smokestacks at Aushwitz aren't even connected to the main building or its so-called "gas chambers" with wooden doors.

Please don't claim that I'm being overly harsh or hostile to your idiotic idea. I've tried to cut out personal insults towards you where possible, and you might notice that I've never once insinuated that you're a jewish fedboy here to start retarded arguments and play the needlessly-attacked oppressed victim in need of rescue when rightfully criticized. You genuinely need to think of better ones if you want to help white people. Get your head out of your ass and try harder.
Anonymous
Tue, 01 Jun 2021 14:02:52 GMT
ed62409
?
No.147275
147288 147289
>>146950
One more thing...