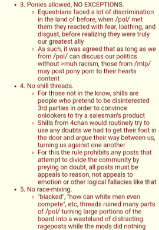 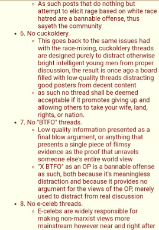 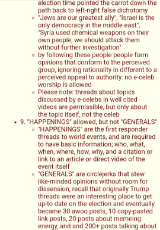 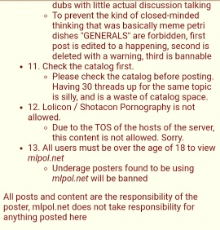 What Are The Rules?
Anonymous
Tue, 25 May 2021 21:48:16 GMT
No.5921
5922
[Last 50 Posts] [Last 100 Posts] [Last 200 Posts]
After a very thorough perusal of the rules, I find no entries for 'Attacking Users', nor 'Thread Derailing'.
What does Attacking Users mean, and under what rule(s) is that an enforceable (let alone bannable) rule. Likewise for Thread Derailing.
This wouldnt be a big issue (simple, kick them and be done), except that staff has reported as being aware of the situation and neither reversed the ban nor has taken any action with regard to the staff member who placed the ban.

I dont mean to jump to conclusions, but it SEEMS like staff has finally decided to abandon the pretense of having any tangible or actionable policy, and is simply doing whatever the fuck they want.

Friendship.
Anonymous
Wed, 26 May 2021 11:01:03 GMT
No.5925
5926
>>5924
>We the staff of mlpol do not ever want to become anything like those of certain other websites, therefore the following rules were laid out by the site owner, Atlas
We dont actually follow them, we just pretend to and post ponies and vapid platitudes and hope no one will say anything

>No staff member shall use the information he obtains in his position on staff for personal gain, lulz, or to harass/humiliate a user or other staff members
Unless its Lotus, or Elway, or,... cuz friendship

>Staff will maintain a level of transparency with the community
But only when literally forced to, otherwise staff will put a gag order on any changes being made public,... cuz friendship 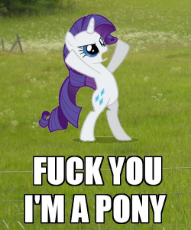 >>5925
You know perfectly well why you were banned. For the benefit of anyone else who happens to read this thread and is curious about what is being discussed, you were banned because of your posts in this thread:

You were openly browbeating another user for no good reason, to the point where the guy actually abandoned his own thread. In all honesty we usually leave arguments between users alone even if they get ugly since it falls well within the bounds of free speech and it's not really our job to police hurt feelings. However, in your particular case, we determined that the attitude on display in that thread is part of an ongoing pattern of obnoxious, abrasive and otherwise hostile behavior that is disruptive to the general tranquility of the mlpol environment. Since it's mostly been directed at staff so far we've been mostly ignoring you; however, now that you're pissing actual users off while contributing little of serious value to overall discourse, we felt it was appropriate to bitch slap you a little. Hence, you received a three day ban. Don't like it? Cry some more, faggot.

To address your other concerns:

>No staff member shall use the information he obtains in his position on staff for personal gain, lulz, or to harass/humiliate a user or other staff members
I'm actually not sure what you're insinuating here. Nobody here is harassing or humiliating you; you're being a colossal wang-munch and you've been called out on it, that's all that's going on here. You've been poking the bear for months, and you finally got a response. As to using information obtained via staff powers, I really didn't need to use any staff powers to identify you. You're the second most obvious poster on the entire site at this point. Stealth isn't really your strong suit, honestly.

>rules
Rules are rough guidelines subordinate to a purpose, the purpose of our rules being the preservation of this site as a comfy space to shitpost about ponies and politics and whatever else our users have on their minds. If a user feels, in good faith, that the letter or spirit of a particular rule has been violated, he is free to bring his complaints forward and we will do what we can to address them. We do not guarantee a ruling in anyone's favor; we simply promise to hear complaints and take them into account. However, a hostile user who wants to split hairs about the letter of the law in order to exact a purely personal vendetta, as is the case with you, is openly subverting the purpose of the rules for personal gain, and as such will be treated differently than a user who has a good-faith complaint. Since you were on staff once, I'm sure you already understand all of this, even if you choose to continue splitting hairs.

>transparency
Nigger, if I was any more transparent with you than I am being right now, you would not even be able to see me.