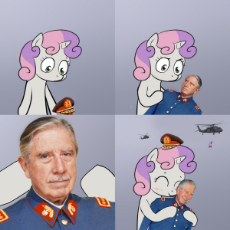 >Marxist is elected president with 36% of the vote, because the right wing vote is split. Proceeds to transform the country according to his political ideas, ignoring the constitutional limits of his office and promotes violent confrontations between his supporters and the opposition. The legislature tasks armed forces with removing tyrannical president and to restore order. Armed forces comply. Restore democracy after they clean house. Somehow armed forces end up being the evil and dictatorial side in the conflict.
>"On 22 August 1973, the Christian Democrats and the National Party members of the Chamber of Deputies joined to vote 81 to 47 in favor of a resolution that asked the authorities to "put an immediate end" to "breach[es of] the Constitution…with the goal of redirecting government activity toward the path of law and ensuring the Constitutional order of our Nation, and the essential underpinnings of democratic co-existence among Chileans."
>The resolution declared that Allende's government sought "to conquer absolute power with the obvious purpose of subjecting all citizens to the strictest political and economic control by the State... [with] the goal of establishing... a totalitarian system" and claimed that the government had made "violations of the Constitution... a permanent system of conduct." Essentially, most of the accusations were about disregard by the Socialist government of the separation of powers, and arrogating legislative and judicial prerogatives to the executive branch of government."