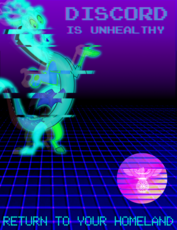 Vinesauce Controversy
Anonymous
Sun, 11 Apr 2021 19:40:19 GMT
No.17257
[Last 50 Posts] [Last 100 Posts] [Last 200 Posts]
Lately, an e-celeb known as "Vinny Vinesauce" has been the target of sexual misconduct accusations by one "GeePM" (a former member of the Vinesauce team) but the result of this did not lead to the community turning on him. Rather, scrutiny on GeePM has uncovered that one of his Discord moderators had been having young teens indulge his fetishes for several years with GeePM turning a blind eye to it. These revelations have led to GeePM nuking his Twitter and blocking 9300 people. He's a faggot (absolutely no surprise there) and I wouldn't surprise if he was a Jew as well.
>The reason he was removed from Vinesauce in the first place: https://docs.google.com/document/d/10a0EFHammcN3-yIZoQSN9bYCPTlraDpi4FT9PisbMS4/edit
>GeePM making excuses for himself: https://docs.google.com/document/d/1DKIDOy82gZHM86HnT4pkhMiu85VlVIATOvryYt4HCEU/edit
>A victim's account of Discord grooming: https://twitter.com/frostieflakez/status/1378502126612082689?s=20