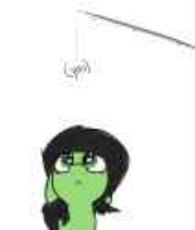 As far as I understand, a bait thread is a thread which the poster posts with no interest in anyone's responses, only interest in making them respond. In order to have an actual anti-bait rule, you would have to have moderators enforcing against people intention. Anti-bait rules are invoked in order to stop people from responding to things which they wish to respond to. It's nothing but "I know better than you" and "stop liking what I don't like." The rule is only ever executed as a witch-hunt.

I just Hope that mlpol become a like 4chan is now