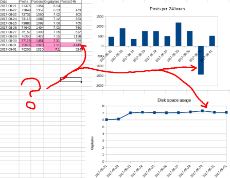 I do not know why the number of posts would be affected. Perhaps strategic thread deletion in the archive caused it, or perhaps it was caused by tinkering with the statistics feature yesterday by the Admin-Dev. Perhaps a developer has a better answer.
3 replies |  1 files |  3 UUIDs |  Archived
;
[Go to top] [Return] [Catalog] [Archive]