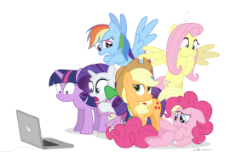 You know how I always wished I could able to roleplay or say random stuff as some fictional characters like "Sans Lazy Moment #1" and "Pinkie Pie's Wild Ride Recipie #69"? I would love to see a board about /B/ but pure focuses on OCs and FCs. Like "What if cartoon/video game characters interacted in /B/" like 4chan yet much different?

I would call it /BFG/ "Random Besties Ficties Guys" where it's "/b/ meets OC and FC of all kinds." like Mario talking about Chowder cartoons, and Fluttershy talking bad about artwork of Sonic and the girl from DragonBall Z, etc. Where in the /b/ rule is "OP have to always pretend to be their OC or FC of any kind in their own board."? Like follow this meaning https://en.wikipedia.org/wiki/Character_(arts) S-sorry, it's my first idea..

You can come up ideas. I don't want this fun board to be another /b/ with bunch of real life talks of "rekt" "blacked" "rate" etc.

yeah. I want to include screenshot of Spongebob chocolate with his evil plan on the crazy guy, double dee's rant on kanker sister, and other roleplay-like just to give ya ideas.

But/b/-like style instead of/quest/-like , /co/, /v/, and traditional roleplay games board like from 4chan

You guys or admin could help out and give suggestions.

The reason for this is that the biggest problem with any new board on mlpol.net is the lack of traffic that board is likely to receive. As such, the broader the broader the topic, the better. Having such narrow requirements would also prevent the movement of low quality or off topic threads from the main board to the new board, which is part of the reason a new board would be desired.

It is entirely possible for any new board to have its name field default to a set of fictional character names, "Sonic" or "Rainbow Dash" or what have you, rather than the standard "anonymous." We've had a board in the past with a similar feature. Furthermore, I encourage you to try a thread with a topic like this on the main board, since it would clearly be topical if there is a pony involved, and so we can see how much interest there is for this idea. Give it a try.

I would accept to assist, but I am a little flustered on your explaination on the third sentences.