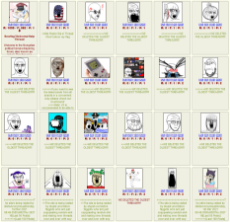 Anonymous
Mon, 01 Mar 2021 14:16:54 GMT
No.5449
5450 5454
[Last 50 Posts] [Last 100 Posts] [Last 200 Posts]
Any dual-hemisphere owner knows the threads aren't gone, but I'm glad they got their dopamine and screenshots to post to their discord friends. In the future considering the recent failraid "oh wow we bumped threads off the list haha what an accomplishment" will there be any investigation into a global throttle for creating new threads? Their goal seems to be removing all the existing threads off the last page, but considering the database probably isn't being consolidated and cleaned on the hourly, they've accomplished nothing but making a little work for you. Perhaps a throttling system which would detect too many threads being created per hour, and prevent creating new threads until an admin toggles it back off? Or even adding a feature that retains old threads for 24 hours after they would have been removed due to inactivity, even if there's too many new threads, so that an admin can go in and remove any raid attempts after the instigators get bored instead of needing to flip a flag in the database by hand to restore them? Thoughts?
Anonymous
Mon, 01 Mar 2021 16:28:16 GMT
No.5450
>>5449
A Thread Retention system sounds like a good idea.
The way they're copypasting random english words/phrases reminds me of the way CCP shill drones will copypaste random english gibberish (especially the rules of the stream) into Kiryu Coco's twitch chat during livestreams.
They do this because it clogs up the chat and keeps her from seeing messages by her fans in real-time.
Normally they'd spam chinese shit but then her moderators started banning chinese-spammers.
So spamming random english copypasted shit is their attempt to be less conspicuous than if they just typed "REEEEEEEEE FUCK YOU KIRYU COCO, HOW DARE YOU IMPLY TAIWAN IS A REAL COUNTRY BY SHOWING THE STATISTICS THAT SHOW WHAT PERCENTAGE OF YOUR VIEWERS COME FROM WHICH COUNTRIES! YOU ARE HURTING CHINA'S PRIDE AND HONOUR BY SAYING SUCH INSENSITIVE THINGS, SHAME SHAME SHAME!!!"
Lefties all think the same, even when they speak Bugmen instead of human. It's bizarre.
Anonymous
Mon, 01 Mar 2021 20:37:32 GMT
No.5454
>>5449
Fucking homos.
[Last 50 Posts] [Last 100 Posts] [Last 200 Posts]
2 replies |  1 files |  3 UUIDs |  Page 5
[Go to top] [Return] [Catalog] [Reload] [Archive] [Update] ( Auto)