> Source in Saudi Arabia says American private security contractors are carrying out'interrogations' on princes and billionaires arrested in crackdown
> Detained members of Saudi elite have been hung by their feet and beaten by interrogates, source says
> Among those hung upside down are Prince Alwaleed bin Talal, an investor worth at least $7 billion who is being held at Riyadh's Ritz Carlton
> Arrests were ordered three weeks ago by Crown Prince Mohammed bin Salman
> Source claims mercenaries are from 'Blackwater', a claim also made by Lebanese president
> But its successor firm denies it has any operations in Saudi Arabia whatsoever and says its staff abide by U.S. law
> Americans who commit torture abroad can be jailed for up to 20 years

>Saudi princes and billionaire businessmen arrested in a power grab earlier this month are being strung up by their feet and beaten by American private security contractors, a source in the country tells DailyMail.com.

>The group of the country's most powerful figures were arrested in a crackdown ordered by Crown Prince Mohammed Bin Salman three weeks ago as he ordered the detention of at least 11 fellow princes and hundreds of businessmen and government officials over claims of corruption.

>Just last month, the Crown Prince vowed to restore 'moderate, open Islam' in the kingdom and relaxed a number of its ultra-conservative rules, including lifting a ban on women driving.

>DailyMail.com can disclose that the arrests have been followed by 'interrogations' which a source said were being carried out by 'American mercenaries' brought in to work for the 32-year-old crown prince, who is now the kingdom's most powerful figure.

>'They are beating them, torturing them, slapping them, insulting them. They want to break them down,' the source told DailyMail.com.
…
https://archive.is/gzcZ6 - http://www.dailymail.co.uk/news/article-5108651/American-mercenaries-torturing-Saudi-princes.html

What news broke?
American contractors where?
Hanging from feet?
Re-read dumps.
Why is this relevant?
News unlocks map.
Expand your thinking.
Q

Saudia Arabia seems obvious.
USA has politicians "retiring" and having medical boots on. 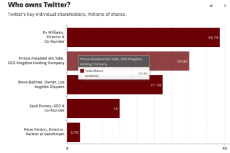 Twitter to be liberated?
Anonymous
Fri, 24 Nov 2017 05:25:48 GMT
????
?
No.90305
90307
>>90304
no, I'm hoping it's destroyed by this. Or at least damaged enough for gnu.social and gab.ai to eat up more of it's pie. Most normies conglomerate on facebook and twitter. Zuckerburg and jack dorsey are in much bigger positions of influence than even they themselves realize and they're both insufferable "progressives" among other things
Anonymous
Fri, 24 Nov 2017 05:31:53 GMT
????
?
No.90307
90317
>>90305
Not disagreeing but Trump likes Twitter and at some point the right wingers need to stop playing safe and take back some virtual land. I don't know if that is now but the Q "LARPing" is consistent with someone wanting to have this partially in the normie-space. Q does ask people to make memes.

What is war ultimately but the killing of ideas. What is social media? The expression of ideas. Is the internet a permanent battle space of ideas?
Anonymous
Fri, 24 Nov 2017 06:17:18 GMT
????
?
No.90317
>>90307
The opposition needs to take back some virtual land, that is true. However, the destruction of Twitter and Facebook maybe optimal. The fragments from those companies would make their own startups that would be superior to both Facebook and Twitter, and be more open to discussion. Sometimes the forest must be burnt to allow for bigger and stronger trees to grow.
Anonymous
Fri, 24 Nov 2017 07:52:20 GMT
????
?
No.90337
> >Who knows where the bodies are buried?
>The ones who put the bodies there.
>Blackwater was used in a shitton of shady ops by the US government back when it was under Cabal control and, as a proper PMC, they've got it all kept on the books.

>>150698169
Expand further.
Make the connection.
Map currently has 43 confirmed connections.
Important to understand.
When this breaks many won’t swallow.
MSM not trusted.
You are the voice.
We are here to help guide.
Future proves past.
You are the calm before and during the storm.
Q

>Blackwater’s work with the CIA began when we provided specialized instructors and facilities that the Agency lacked,” Prince told the Daily Beast.“In the years that followed, the company became a virtual extension of the CIA because we were asked time and again to carry out dangerous missions, which the agency either could not or would not do in-house.”

>Initially, lawmakers believed the CIA was “looking for skills and capabilities, and they had to go to outside contractors like Blackwater to make sure they could accomplish their mission,” said retired Congressman Pete Hoekstra. But the relationship was in fact much closer than believed.

>When King Abdullah of Jordan visited the US in 2005, he took a trip to the Blackwater headquarters in Moyock, North Carolina, where company executives awarded him two gifts – a modified Bushmaster AR-15 rifle and a Remington shotgun. The weapons were labeled with the Blackwater logo, but Prince says that the CIA asked the company to give Abdullah the guns “when people at the agency had forgotten to get gifts for him.”