Anonymous
Thu, 23 Nov 2017 23:58:50 GMT
????
?
No.90251
96479 96484
ITT: we try to create a small story to fit in the formula of the MLP:FiM. Let me start:
>AJ sees that the new kind of apples is deliciously sweet so it can be utilized in Pinkie's pastries
>PP is amused and they start to create new brand of sweets called "I-have-no-idea-on-this-one"
>Starlight pitches in, asking if she can help them with this
>noted: Twilight is away in the Canterlot tending to princesses matters
>AJ&PP are like: nah bro, we got this, chill out
>Oh, o-ok, I guess I will go study some books
>Whole of Ponyville is having good time with new sweets, except SG who wants to really be useful
>Starlight reads about a spell that can make food even more fresh and appetizing
>she is not talking about it to anyone,
>goes into PP's bakery at night and casts a spell
>everything seems to be fine at the start, but as soon as the sun rises, cakes are starting to enlarge itselves
>Ponyville needs to be evacuated with a usage of magic balloons
>AJ, PP & SG are on one
>AJ asks what the heck happened?
>SG is like: yeah well ,I might have like a thing or two in common with that…
>WHAT?!
>an argument starts
>we told you we got this
>hey but I wanted to help!
>we don't need your help!
>that strikes SG into the core
>she is going mad, fight erupts
>turns it it is SG who is getting thrown out from balloon ;^)
>right when she is about to be swallowed by enlarged cakes random Twilight out of nowhere
>SG & Ponyville is saved by the 2nd best princess
>the aftermath that includes SG working in Pinkie's Bakery with her hooves, no magic allowed
Moral of the story?
Don't meddle into private business, you damn statists!
Anonymous
Fri, 24 Nov 2017 00:19:47 GMT
????
?
No.90253
File (hide): 47765324430CA9CB210A793D77E49DF4-455179.png (444.5 KB, 1062x1024, HornCuck.png)
[Bing] [wait] [Tineye] [Yandex] 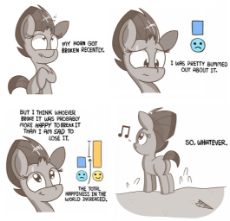 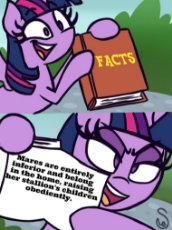 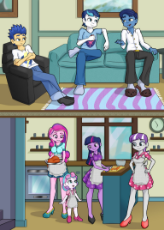 >>90424
You are correct, ponies are even more sexually dimorphic than normal horses, with the mares having significantly less muscle mass and smaller skull size.
Anonymous
Sat, 25 Nov 2017 02:08:25 GMT
????
?
No.90429
90435 90436 90461
>>90425
>>90426
I stand corrected, then. Sounds like a good idea for the show, especially as stallions are relatively underrepresented. Perhaps there is a rescue team that, due to danger and physical exertion, is limited to stallions, but one of the mane six (or maybe a secondary character) wants to join. She is peeved at the rebuffs and wants to prove herself to be just as capable. However, despite her best efforts and training she just can't match the physical stamina of any of them. To cheer her up, the stallions discover what she is good at (maybe nursing, cooking, or nurturing) and help her appreciate her abilities there.

It may be a little too blunt about the message, though. A good moral teaches itself to you without you even realizing it.
Anonymous
Sat, 25 Nov 2017 03:19:05 GMT
????
?
No.90435
>>90429
it would have to be someone like twilight or applejack.
Rainbowdash is a freak of nature and is probably the strongest mare in that universe (physically)

>anon travels to Equestria somehow
>has sex with all the ponies, literally all of them
>becomes renowned as a superior lover, much better than Chad reeeeeeeeeeeee
>ponies all remark that his personal hygiene is at least above average
>Princess Celestia cries loudly that a statue of Anon shall be built to commemorate this momentous day, as Anon ejaculates inside her
>Anon tips his fedora and rides off into the sunset, his life's work now complete
>thousands of years later, the statue of Anon plowing Princess Celestia still stands at the center of a park in Neo-Canterlot
>cyber-ponies still gather around an aging Princess Celestia as she regales them with the story of the mysterious Anon, who came to Equestria one fateful day and totally rocked their world
Anonymous
Wed, 29 Nov 2017 11:49:47 GMT
????
?
No.91404
91406
>>91396
wow it's every hie fic ever 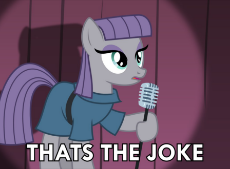 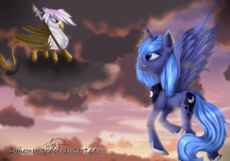 >>90251
Something I came up with for /mlpol/ during the original thing in 4chan:

Twilight is helping Celestia with planning the budget, when she notices that Equestria has been sending foreign aid to Griffonstone ever since they lost their idol of Boreas many many years ago. She's surprised about this because according to Pinkie and Rainbow Dash the Griffon kingdom was still a dump after all these years, and decides to go find out where all the foreign aid is going.

In Griffonstone she asks around, and it gradually turns out the reason they haven't gotten their act together is that since the goods they get from Equestria are free, there's no use in trying to produce anything themselves. After hearing enough of this, Princess Twilight repeals the old foreign aid policy.

The griffons are outraged by this. They start preparing for war, smiting weapons and armor in a musical number singing about how ponies have taken everything from them and left them with no other choice, until the musical ends with the griffon army facing the pony army on opposite sides of a battlefield.

Before the battle starts, the griffon leader and Twilight Sparkle walk to the middle of the field to talk for the last time. The griffon says that the ponies made a mistake, as there's nothing the griffons couldn't do once they put their effort into it. Twilight asks if they could also save their own country, which catches the griffon leader by surprise. Twilight reminds the griffon that they just armed and organized an army, and with the same effort they could easily get the Griffonstone back to its feet. The griffon thinks about this, and ends up agreeing. War averted, everyone is happy and griffons finally get their rebuilding started.

>>90251
Another idea I came up with for a thread discussing good Derpy episodes: