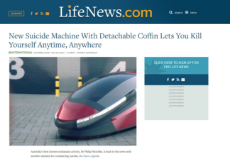 The machine will allow anyone who has the access key to end their life by simply pressing a button. Developed in the Netherlands by Nitschke and an engineer, the machine can be 3D printed and assembled in any location. Access to the Sarco capsule will be by an on-line mental questionnaire which will provide a four-digit access code. 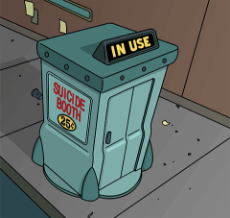 Anyway, this sounds like a great gift for millionaire trolls to send to people. I'd send one to Lady Gaga.

I am not against people suiciding in some circumstances. Some people are in a unavoidable permanent state of torture due to medical problems. But there does need to be a high barrier of entry so le edgy teens don't be le edgy.

Like, it's not really hard to kys, you can pretty much do it by accident, we are learning how to live long for centuries, dying is always a choice.
Anonymous
Fri, 24 Nov 2017 03:02:37 GMT
????
?
No.90274
90283 90299
>>90272
It's interesting to me that often a thing ends up promoting it's opposite. The more you help someone, the more they become dependant. The more forgivng you are to a bad person the more they feel they can get away with. It is almost like everything is opposite. The more rich a society becomes the less children it has. etc.