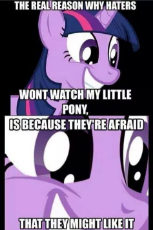 I laugh when I think back on it because I would deny that I liked it even though it kept my attention through the first season.

I still like it because ponies are fun and I sill listen to a lot of the free music the community created in their love for the show.
Anonymous
Mon, 20 Nov 2017 08:19:54 GMT
????
?
No.89418
89420
I steered clear of it for many years mostly due to the heavy stigma associated with the fanbase, combined with the fact that I have enough socially toxic hobbies as it is. I'll admit I always secretly felt kind of like OP's pic though. I put the show in my Netflix queue out of curiosity at one point but didn't end up actually watching it until after /mlpol/ convinced me to.

I enjoy it mostly because it's a cute, light, fun show I can watch before bed or when I feel like watching something warm and cute. I actually find I enjoy the cutesy slice of life episodes more than the more heavy-handed season openers and closers, although I do enjoy the mythology of the show as well.

An old friend of mine was a brony back in 2011/2012 I thought he was weird and made fun of him. Then I played a SHIT TON of TF2 and it was everywhere on it and then a few of the friends I made there where into it so I became more open to it after that. 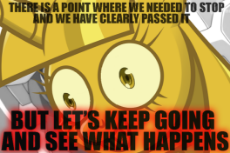 >>89521
It is not just curiosity but weapon grade autism.

It was just one cartoon. A single cartoon that turned the whole world on it's head.
A cartoon that became a medium for outcasts to combine weirdness and dedication.
They were people that made jokes and fapped to weird drawings.

It turned broken people into people with hope. It made them interact gave them a reason.

It makes people look farther than they have seen before. It makes it easier to face reality. 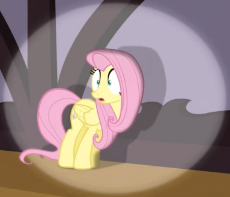 >>89400
I Remember seeing a meme about ponies on iFunny (kill me) all the way back in early 2012. I was very conflicted but also insanely interested in the whole concept of mlp.
Thus began a 4 and a half year wild chase with myself either hating bronies or being sympathetic towards them. But, I was still very interested in the show and fandom.

A day after the 6 year anniversary, I decided, "Fuck it, let's do it". I started Netflix and watched the first 3 seasons in the next 4 days. I finished the rest of the show by the end of that month.

I really do love this show, and this fandom is great. I think the moderate hold it has on society and modern internet culture allows it to be still very relevant yet not being in your face annoying like it was when it first appeared.
Anonymous
Sun, 26 Nov 2017 08:24:10 GMT
????
?
No.90738
I heard all about the worst kind of bronies for years after the show premiered and avoided the show and fandom entirely, even watching a Netflix docu on bronies for keks. During april, agreed in thread with some from /mlp/ to watch their vids if they watched red-pill nazi vids.
And that, as they say, was that.
Anonymous
Tue, 05 Dec 2017 03:59:31 GMT
????
?
No.92439
Fallout 4,

I was a big fan of fallout 3 and new Vegas and played through both after the e3 conference. Fast forward to September and I still had two months until launch. I needed to get my fallout fix until launch but I wanted NEW fallout content. Then I remembered hearing about a really good Mlp fanfic called fallout equestria. I never read it because of my own reservations about reading a fallout fanfic with pastel colored ponies.

I fucking loved it, it was the kind of story I adored. I could go on about my feelings for the fic but we'll just fast forward. Fallout equestria, project horizons, and outlaw later and now I was at a point where I wanted to write my own fic.

I had to understand the source material, so I finnally bit the bullet and watched the actual show. I enjoy it, it's not what I typically like but I feel like I can let my gaurd down around it and just watch a show about characters that live in a good world and will have a happy ending. And if things don't go that way then I can be pleasantly surprised (I should probably mention that I'm somewhat of a sadistic mother fucker, which makes me have an even weirder feeling for this show).

Anyways that's the story of how fallout 4 got me to watch mlp.
Anonymous
Tue, 12 Dec 2017 07:12:41 GMT
????
?
No.94386
dawn somewhere and xxsoundspeedxx
Anonymous
Sat, 16 Dec 2017 09:07:54 GMT
????
?
No.95948
I'm /kind of/ a newfag to the whole pony thing (RIP me), I got into the show in early S6. The first episode I watched when it first came out was No Second Prances. I remember seeing all the pony hype and image macros and videos and such at the beginning in 2011-12, and found all the Internet stuff funny, but never really thought much of it. For whatever reason my brain was not able to make that connection between fan content and the show. Yep, literally retarded, that's one required step out of the way.

In early 2016, I kept running into YouTube animators that I really enjoyed, and it turned they did pony stuff. And of course, as is the nature of the Web, they linked to other YT pony animators, and I really enjoyed their stuff as well. That kinda got me "desensitized" to the idea of MLP just being a "little girls show" and just a regular TV show that people actual enjoy, and I could consider watching.

So I was channel surfing one day after coming home, not really interested in anything I saw, and then I noticed that MLP was running on DiscoFam (probably just a s5 rerun or something like that). I thought, "huh, why not? all these youtube people I enjoy and who make really good stuff like the show! maybe I will too…" And so I watched an episode. And I enjoyed it. Fuck. So I watched another one, and like it too. Fuck me! I'm turning into a fucking faggot! Next day at the same time I sat in front of my TV and saw that there was MLP again, so I watched some more, not really watching any specific episodes, just what was on. This became kind of a daily thing for me to do, until one day all of a sudden I decided to binge watch through all of season 2 on archive.org. I'm not sure why I chose to watch it on archive.org, but it was there, and I watched it, and enjoyed every minute of it. So now I'm here. What has my life come to?
Anonymous
Sat, 16 Dec 2017 09:15:22 GMT
????
?
No.95950
95953 95954
>If you don't like it, why are you here?
I'm not a huge fan, but I am here because I prefer the community and mods here to the community and mods on 4chan.
Anonymous
Sat, 16 Dec 2017 09:27:36 GMT
????
?
No.95953
95954
>>95950
you're welcome here anon but I'm speaking from experience when I say it's too late for you, you'll be watching the show and jacking it to pony porn before long
Anonymous
Sat, 16 Dec 2017 09:29:43 GMT
????
?
No.95954
>>95950
what >>95953 says is right, first time I fapped to pony porn was April 1st.
Anonymous
Sat, 16 Dec 2017 13:17:00 GMT
????
?
No.95966
>tfw you were there when 4chan was torn apart by pony
>tfw you took part in the shitposting
>tfw moot finally gave in and created /mlp/
>tfw you were one of the originals
I stopped watching the show for a few years after that, but fell in love with it again after /mlp/ showed up on /pol/
Anonymous
Sat, 16 Dec 2017 17:25:29 GMT
????
?
No.95987
I was adamantly against horsefuckery for a long time after it started up.
I finally caved one day and watched an episode of Friendship is Witchcraft on youtube.
I liked it so much I watched all of them, after that I still wanted more and decided to watch the first episode of the actual show… just for context to the parody I saw of course.
I ended up binge watching every episode up to the season 2 finale and here I fucking am.
Anonymous
Sat, 16 Dec 2017 17:46:50 GMT
????
?
No.95992
I think it was around early season 2 when I heard about MLP, they started posting pony memes on that icanhazcheezburger site I used for viewing Failblog.org back then. I was a kid, failblog was funny, and cheezburger was better then than it is now.

Anyway, I saw some pony memes, watched an episode of the show, expected it to suck, and it didn't. And so, I became a closet brony. It was a tiny secret island of sunshine and happiness in my miserable abused-child life. I even posted on MLPforums, and made threads on their life advice forum asking for advice about my shitty life. I ignored the many assholes and focused on the very rare good people that weren't just virtue-signalling, and I made a whole three friends on that site before getting banned for triggering feminists.

I'm only still in contact with one friend from that site. I kinda miss it. I really wish major MLP site moderation wasn't so damn corrupt.
Anonymous
Fri, 29 Dec 2017 18:30:19 GMT
????
?
No.99003
>What got you into MLP?
I started browsing 4chan in 2011, and noticed too many pone images. I assumed the show would be subtly cynical and self-aware based on the demographic. Some weeks later watched "Over a Barrel" on YouTube. "Not bad." I thought, and decided to watch Episode 1. Got emotional about "the spark" realizing the show was 'sincere' and caught up with "Party of One" air date 3 weeks later.
>Why do you still like it?
An enormous fan-fic project that's been in limbo since season 2. I haven't ceased drawing pones since. Really enjoyed .mov series, turnabout storm, sogap, and fan works in general (porn included). I stopped paying attention in season 5, only watching individual episodes if they are praised highly.
Anonymous
Sat, 30 Dec 2017 03:54:38 GMT
????
?
No.99248
I got into it when the merge happened. I saw a thread talking about greens, read Manos The Hands of Fate as well as Steel Sanctuary and decided I wanted more.
Still haven't actually watched the show, but I'm following a few generals just to catch new greens and updates. 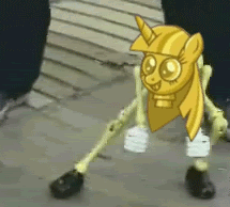