Anonymous
Sat, 18 Nov 2017 17:22:15 GMT
????
?
No.89074
89110
Venezuela Officially In Default
https://archive.is/C4LT6
>After rating agencies declared Venezuela in selective default and after a meeting with creditors on debt restructuring failed earlier this week, the International Swaps and Derivatives Association (ISDA)—a finance industry body—has voted that both Venezuela and its state oil firm PDVSA had defaulted on their debt payments.

>The vote by the New York-based industry group will trigger payouts on debt default insurance on its bonds, the so-called credit default swaps (CDS) that investors use to protect against defaults.

>The members of the committee—which includes Goldman Sachs, JPMorgan, Deutsche Bank, Barclays, and Credit Suisse, among others—decided to meet again on Monday, November 20, to continue discussions on how to proceed and discuss an auction that is expected to determine the amount that holders of CDS will be paid.

>Venezuela and PDVSA missed bond payments on October 12, and were using the 30-day grace periods on those two payments to collect cash to pay dues on October 27 and November 2, which didn’t have grace periods. 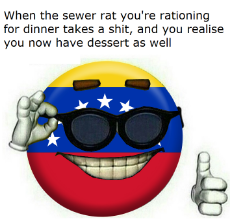 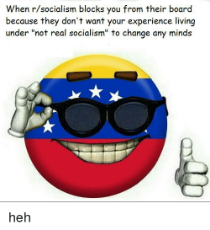 >>89079
>Venezuela's falling crude oil imports are a 'huge red flag' that could shock the market
Largest proven oil reserves, and look what Hugo Chávez did to Venezuela. Socialism is a hell of a drug.
Anonymous
Sat, 18 Nov 2017 17:54:37 GMT
????
?
No.89086
89096
>>89084
They have a lot of oil, although it is low-quality tar-sand oil that needs to be processed quite a bit before it's useful to anyone. Under proper management, it those resources could've built a strong lasting economy, but socialist economies aren't sustainable. As soon as the price of oil started falling, so did their quality of life.
Anonymous
Sat, 18 Nov 2017 19:02:59 GMT
????
?
No.89096
>>89086
It's a lack of diverse economy. Saudi Arabia has been going through the same thing as well, now they are paying the price.
Anonymous
Sat, 18 Nov 2017 20:23:53 GMT
????
?
No.89110
>>89074
Checking figures real quick, Venezuela "owes" somewhere around 250 times it's current total governmental assets to the kike scum. It appears that when judeo-communism spreads using the "liberations" of equality & free money lies, a country's first ten problems snowball faster than the attempts to control them. This last problem, that of country wide mono-industries, has been in place just long enough that the first necessary repairs OF said industry also bankrupted the country. Something to think about the next time someone spouts off how judeo-communism or it's descendants are better.
9 replies |  4 files |  1 UUIDs |  Archived
;
[Go to top] [Return] [Catalog] [Archive]