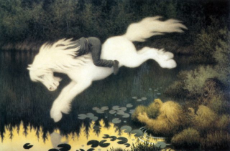 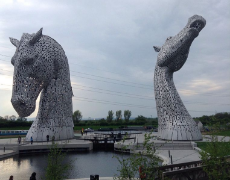 >For centuries, Scottish folklore and legend have both been filled with tales of a wild and deadly beast known as the Kelpie. The terrible creature, which has the ability to transform itself into various forms, was greatly feared centuries ago, when reports of the Kelpie were at their height. As for its curious name, “Kelpie” is an ancient Scottish term meaning “water-horse.” There is a very good reason as to why that particular name was applied to the beast, as will soon become very clear.

>The water-horse spent much of its time lurking in the waters of Scottish lochs – specifically in the shallower, marshy areas of such locales. It would coldly and callously wait for an unwary passer-by to appear on the scene and then strike, mercilessly and without any hint of a warning. The beast’s mode of attack was, admittedly, ingenious, even if the end result for the victim was not a good one. In fact, it was almost always downright fatal.

>Very much creatures of the night, Kelpies were said to dwell in the waters of literally dozens of Scottish lochs. As creature-seeker Roland Watson demonstrated in his book The Water Horses of Loch Ness, however, the vast majority of reports of such beasts emanate from none other than Loch Ness; the home of what is arguably the world’s most famous lake monster, Nessie – to which we shall return shortly.

>We may never know, for sure, the real form of the Kelpie; only the guise that led to the creation of its name. But, what we can say for certain is that the small number of witnesses who encountered the beast, and who lived to tell the tale, described it as resembling a large horse. In most cases, the victim was a late-night traveler, walking along an old, well-known pathway near the water’s edge of the relevant loch. Suddenly, the huge horse would rise out of the water, dripping wet, and make its way to the shore, with its coat shining under the light of the Moon.

>Under such strange circumstances, many might be inclined to make a run for it, as in immediately. There is, however, a very strange aspect to some of the Kelpie stories. Namely, that the people who crossed its path felt as if their free will had been taken from them and that they were deliberately prevented from fleeing the scene. Today, we might justifiably suggest that the beast had the power to control the minds of those in its deadly sights. Perhaps, even by a form of supernatural hypnosis. Those fortunate enough to escape the icy clutches of the Kelpie described how they felt driven to climb on the back of the horse and grab its reins. Despite having a sense of dread and a fear of doing so, that’s exactly what so many did – and, in the process, failed to survive and tell their tale. It was at that point that the Kelpie made its move – an incredibly fast move.

>With the entranced person now atop the monster, it would suddenly launch itself into the deep and cold waters of the loch, with the poor soul unable to let go of the reins. Death by drowning was all but inevitable, aside from that very lucky, aforementioned body of people who were fortunate enough to have survived and who related their stories – hence why we know of the creature and its terrible modus operandi.

>When word of the murderous monster got out among the people of the small hamlets and villages of ancient Scotland, the Kelpie cunningly chose to take on another form, given that its cover – as a large horse – had now been blown, of course. That form was a beautiful woman. Her targets were again people walking home late at night. The she-devil would, just like its horse-based form, beckon the entranced person to the water’s edge. She would then take their hand, and slowly lead him into the loch; careful step by careful step. Then, when the poor soul was around waist-deep she would violently drag them below the water, drowning them in seconds and mercilessly stealing their soul.

>As I noted earlier, Nessie authority Roland Watson has determined that the vast majority of centuries-old sightings and reports of Kelpies emanated from Loch Ness. This, obviously, provokes important questions: could the Nessies of today, and the Kelpies of yesteryear, be one and the very same thing? In my opinion, yes. Supernatural shapeshifters? Maybe. Or, possibly, the tales of the Kelpies were distortions of early encounters with real, flesh and blood animals. 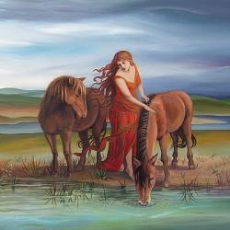 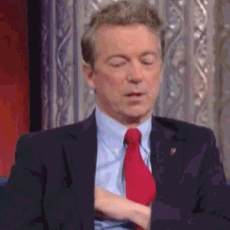