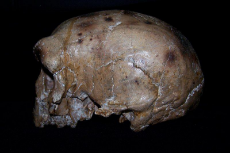 Anonymous
Thu, 16 Nov 2017 21:18:43 GMT
????
?
No.88762
>Most scientists believe all modern humans are descended from African ancestors. But a new analysis of an ancient Chinese skull found too many similarities to the earliest human fossils found in Africa to be a coincidence; maybe we didn’t all originate in Africa.

>Known as the Dali skull, it was discovered nearly 40 years ago in China’s Shaanxi province. It belonged to a member of the early hominin species Homo erectus. Its facial structure and brain case are intact, despite being dated to around 260,000 years ago. The Dali skull is so old that archaeologists initially didn’t believe it could share features with the modern Homo sapiens.

>But Xinzhi Wu of the Chinese Academy of Sciences in Beijing believed that due to the overwhelming physical similarities, Homo erectus must have shared DNA with Homo sapiens. After decades of this idea being dismissed by mainstream academia, Wu and a colleague, Sheela Athreya of Texas A&M University, recently reanalyzed the Dali skull and found it may force us to rewrite our evolutionary history after all. It’s incredibly similar to two separate Homo sapiens skulls previously found in Morocco.

>If we’d found only the Moroccan skulls, and not the Dali skull, it would make sense to keep believing all modern humans evolved in Africa. But the similarities show that early modern humans may not have been genetically isolated from other parts of the world, like what we know today as China.

>“I think gene flow could have been multidirectional, so some of the traits seen in Europe or Africa could have originated in Asia,” Athreya told New Scientist.

>So certain characteristics that we associate with modern Homo sapiens may have actually developed in east Asia, and were only later carried to Africa. We’ll still need further comparisons between the Dali skull and the Moroccan ones. But the implications are enormous; we’re talking about rewriting the origins of our species as we know it, reassessing how our ancestors migrated and interacted and subsequently evolved.

>“In a real sense we are talking about a multiregional population, connected recurrently by migration and genetic exchanges,” John Hawks of the University of Wisconsin-Madison told New Scientist.

Prehistoric humans found in Greece, now in China…I'm willing to bet that in a hundred years the scientific account of humanity's development will be enormously different.
Anonymous
Thu, 16 Nov 2017 22:09:00 GMT
????
?
No.88767
>>88765
I've noticed something about science. We make assumptions about a new discovery, this assumption comes from scientific consensus developed when we have the least information. Then as alternate information comes along it has a high barrier of entry because "extraordinary claims require extraordinary evidence" or basically inertia and dogma resistance. There are many incidences of this is science. Scientists are our version of the priest class, with magic languages and high barriers of entry.
Anonymous
Sat, 18 Nov 2017 03:24:48 GMT
????
?
No.89020
File (hide): 5E62EE7C3A51596337A3A962B1B6728B-42726.jpg (41.7 KB, 1200x630, Skull-Found-in-China.jpg)
[Bing] [wait] [Tineye] [Yandex]

>Most people discussing the origins of our species suggest that Homo sapiens can be traced back to Africa about 200,000 years ago. However, an increasing amount of evidence suggests that there may be a flaw in accepting this general belief. Recent analysis of a 260,000 skull from China is helping rewrite the story.

>Before now, the oldest accepted dating for Homo sapiens remains were said to be from the site of Omo Kibish in Ethiopia, dated to 195,000 years ago and Herto, also in Ethiopia, from 160,000 years ago. But new research is showing that things are more complicated. In fact, it seems that there was more mixing between diverse hominin populations than has been generally accepted and human ancestors were living in Eurasia as far back as 200,000 years ago.

>The initial assumption the skull pertained to a Homo erectus individual was largely due to the extreme date of the remains. However, the recent publication of other human remains dating from 300,000 to 350,000 years ago in Morocco may have incited researchers to take another look at the Dali skull. As Newsweek reports, the idea that the Dali skull may have more in common with Homo sapiens than Homo erectus has been floating around for decades, but has been continually dismissed as improbable by mainstream scholars. 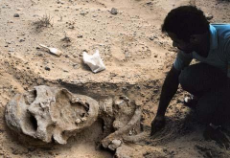 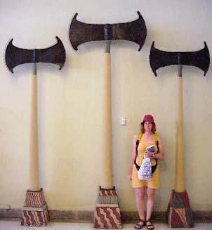 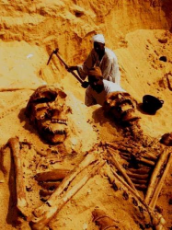 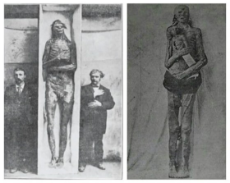 There are a number of tales mentioned in Native American tribes about tall and strong red-haired giants, which inhabited the Nevada region of thousands of years ago. In the stories they are described as cruel, cannibalistic and extremely barbaric race of humanoid giants.

This Native American tribe was called The Paiute and they had a name for this race of giants which is Si-Te-Cah. In northern Paiute, this means ‘tule-eaters’, since, according the legend, these giants arrived from a distant island by crossing the ocean on the rafts constructed using the fibrous tule plant.

In the sixteenth century, Spanish conquistador Pedro Cieza de León in Crónicas del Perú finds a story about the origin of the South American giants. According the story they “came by sea in rafts of reeds after the manner of large boats; some of the men were so tall that from the knee down they were as big as the length of an ordinary fair-sized man.”

According to the legend, this ancient tribe of Giants waged war against the Paiute and all the other tribes in their neighborhood. The war was dreadful for the Native tribes and on the eve of their annihilation they joined their forces all together against Si-Te-Cah, therefore managed to lure them inside a cave. Once they got them inside, tribes started a fire at the entrance of the cave which caused all giants to suffocate and die.

The entrance of the cave was sealed off by the tribes until 1886 when John T. Reid, a mining engineer, intrigued by stories of Native tribes, went into the cave and although he could not dig by himself, he spread the story.

Sadly, the attention was caught by a company established by miners David Pugh and James Hart and due to the fact guano deposits were discovered inside. They started excavating the valuable resource in 1911, but in that process, any kind of artifacts that might have been discovered was almost certainly overlooked or lost.

Nonetheless, after the exterior layer of guano was mined, fascinating objects started to surface. This prompted a proper excavation being conducted in 1912 by the University of California, followed by another one in 1924. Reports informed about a huge number of artifacts acquired, many of them being completely astounding.

Probably one of the most remarkable findings within this cave, was several 15 inches long sandals that revealed indications of being used. Allegedly, other extraordinarily larger items were recovered, but have since been secured away in museum warehouses and non-public collection.

The only piece of evidence that can be witnessed at present is an enormous palm print, embedded on a boulder inside the Lovelock Cave.

The second excavation that took place in the cave exposed many other disturbing discoveries. In 1931, based on an article posted in the Nevada Review-Miner, a couple of huge skeletons were found buried in a dry lake bed near Lovelock, Nevada. The extra-large remains measured 8.5, respectively, 10 feet in height and was found on them reddish hair.

There are numerous speculations circling around the scientific communities that these vicious giants could in fact be the biblical Nephilim, the forsworn offspring of the ‘Sons of God’ with the ‘daughters of men.’ If this happens to be correct, we can presume that these mummies will probably be hidden from the public in order to keep this history secret.