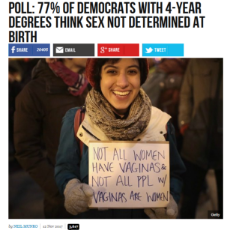 It used to be when you asked these idiots, they would tell you that sex was physical, gender was mental. They would admit to being a woman, but not feeling like it. Now they want to say that the penis is feminine and the like.