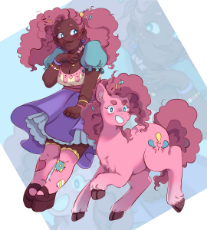 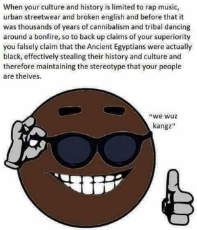 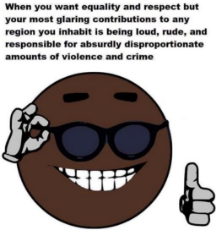 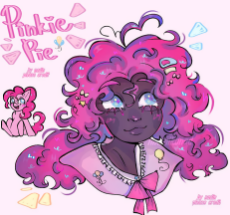 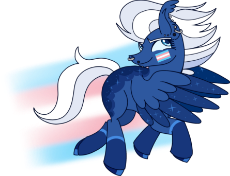 >>352316
What it always says about them, is that they're the shallowest, most superfluous people imaginable.
>They're faggots in denial so desperate to believe in smart black characters they'll literally invent them
Invent? No, inventing them would be fine. What they do is steal.
>it says something about which Mane Six pony they consider black.
No, it's not about M6, it's about what traits they want to ascribe to niggers to, ironically, whitewash them. What for example Niggerlight is implying is "niggers aren't retards, they're smart and studious and heroes", Niggerbow is implying they're loyal and athletic, Niggerjack that they work hard and cleave to their family, Niggershy that they're kind and care about animals, Niggerity that they're skilled and value beauty, and Niggerpie that they're knowledgeable and fun-loving...
...but of course everyone but delusional idiots knows niggers aren't any of that, so it falls flat and reinforces the stereotype that they can do nothing but rob whites.
>>352317
They're horses that live in latitudes roughly matching Europe or, more accurately, middle North America, have lived their entire lives there, and have never had a mass nigger import in their history. Even before you consider their behavior (which is very unlike that of niggers), or the existence of actual African/Native American equivalents (Zecora and bison, respectively) making the ponies the whites stand-in, them having high melanin makes no sense.
>>352320
At least it's not covered in birdshit.
Anonymous
Mon, 19 Sep 2022 21:29:43 GMT
fbcaafd
?
No.352341
>>352317
Good point. The show features african Zebras and "Saddle Arabians", eventually adding in indian ponies, and they're all easily identifiable as such. Nobody in the mane six is secretly a nigger or voiced by a nigger. When the retards working at Hasbro wanted to niggerize Applejack into "Someone born on the wrong side of the tracks" and use nepotism to "suggest" a niggress "voice actress" (are you really an actor or actress if you can only sound like yourself?) to voice her. In their own ways they're all as unwhite as possible.
7 replies |  5 files |  7 UUIDs |  Archived
;
[Go to top] [Return] [Catalog] [Archive]