Same reason ARGs attract and retain an audience. That larping faggot made his posts vague, but based on just enough real information and suppositions that things he said could be easily mapped onto any number of events. It encouraged followers to perform all sorts of mental gymnastics to make cryptic posts match real world events, then rant about them as if they were conspiracies (making them appear ridiculous to undecided onlookers), which I'm certain was the intent. Most people live pretty boring lives, so the idea that they were being let in on a secret shadow war against a global cabal was a very attractive lure while duping them into doing almost nothing about it by imposing a belief that an equal and opposing force was acting on their behalf.

As a psyop, it was a masterpiece. Even after the movement effectively died with the conclusion of the 2020 election, many of them still believe in it. Though, only people who weren't familiar with how larps like this work actually fell for it, which is a surprising number of people who only have experience with the web 2.0.

In bleak times, when treason and evil walk grinning abroad in the land by broad daylight, people have a hardwired emotional need to believe in something, to believe things are going to get better.

>And who is behind qanon?
Fuck if I know. I doubt it was the government simply because our rulers want humiliation and despair. They don't want people to have any kind of counter-mythos, anything to rally around, anything that contradicts The Narrative that oozes forth from MSNBC and CNN and the Jew York Times. Humiliation and despair sap a people's fighting spirit and make them unwilling to resist. The Qanon bullshit, and I'm willing to call it that without reservation, was the sort of mythos that people rally around, the kind that inspires people to think in terms of acting and not just keeping their heads down and praying for that giant meteor. Then again, our enemies aren't a monolith, and they often work at cross purposes, because they're evil and cunning but also egomaniacal and batshit insane, caught up in a bizarre fantasy world, and unable to comprehend or cope with real-world truth or logic.

Maybe some patriot wanted to inspire people. That's exactly what The System doesn't want, and their reaction to Q is exactly what you'd expect. Maybe it was some kind of psyop to make people bide their time and not think everything was lost, but if that was the intent it worked too well, bringing too many patriots together.
Anonymous
Sun, 27 Jun 2021 00:28:47 GMT
79e80e8
?
No.311371
311373
>>311361
>I doubt it was the government simply because our rulers want humiliation and despair.
Oh yes it was our rulers. The government owns the internet and can trace every bit of traffic if the target is worth the effort.
Qanon had insider intel and a very seasoned psy-op mastermind. You can be sure that no next door Joe could produce this kind of operation without to be tracked and assassinated in less than 2 weeks.
Anonymous
Sun, 27 Jun 2021 00:45:21 GMT
d1bdc46
?
No.311373
>>311371
There is three options assassination, complete humiliation, conversion.
All have the same effect, how it is done is different. If you're interesting enough or useful enough or just annoying enough but tolerable they'll give an offer 'you can't refuse'. Highly unlikely, but is has been known to happen in differnt tier structures.
The mid slinging and humiliation is part of a long lasting information campaign to smear the credibility by every means necessary effectively making someone an unwilling pawn. Having the knowldge and other various junk put's the danger level higher.
The multitude of ways for them to take someone out of the picture permanently or temporarily are quite a few. Ranging from highly publicized and obvious to very hush hush, totally a believable accident or happenstance due to another party. 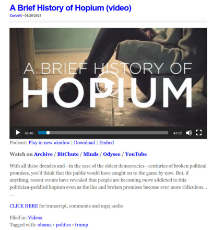 >>311086
>Why did so many people fall for qanon?
Check the following out, in my opinion it is the most comprehensive and normie friendly analysis available. It is an eye opener the mechanism of how the masses are psychologically toyed by the rulers.