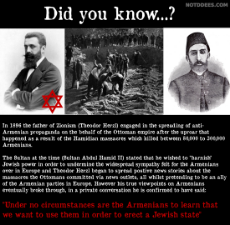 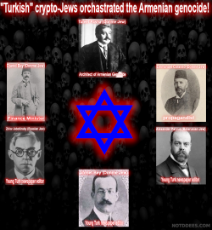 Back in 1896 after the Hamidian massacres were Turkish forces slaughtered around 80,000-300,000 Armenians the father of Zionism (Theodor Herzl) helped spread pro-Ottoman and anti-Armenian propaganda in Europe due massive backlash the Ottomans were receiving for the massacres in hopes it would warm the Sultan (Abdul Hamid II) up for talks of a Jewish state in Israel, the Sultan himself stated that he wished to “harnish” Jewish power to undermine the sense of sympathy felt for the Armenians, this was all whilst Theodor Herzl attempted to calm down Armenian communities in Europe and pretended to ally with them, eventually though it was revealed in a provide conversation that he said: “Under no circumstances are the Armenians to learn that we want to use them in order to erect a Jewish state.”

The Young Turk revolution against the Ottoman empire was heavily supported by Donmeh and Freemasons, hell most of the early sympathizers for the Young Turks met in Masonic Lodges to discuss their plans on overthrowing the Sultan (Abdul Hamid II), the architect of the Armenian genocide (Talaat Pasha) was even at some of these early Young Turk meetings in Masonic Lodges.

Sources:
The Donme: Jewish Converts, Muslim Revolutionaries and Secular Turks
(https://books.google.com/books?id=ncg4sMAxalgC&pg=PT119#v=onepage&q&f=false)
The History of Freemasonry in Turkey
(https://web.archive.org/web/20060520105427/http://www.mason.org.tr/en_history.htm)
The Jewish Genocide of Armenian Christians (https://archive.org/details/ChristopherJonBjerknesTheJewishGenocideOfArmenianChristians)
Talaat Pasha: Father of Modern Turkey, Architect of Genocide
(https://www.google.com/books/edition/Talaat_Pasha/hhtEDwAAQBAJ?hl=en&gbpv=1)
“Down in Turkey, far away”: Human Rights, the Armenian Massacres, and Orientalism in Wilhelmine Germany
(https://www.jstor.org/stable/10.1086/517545)
Theodor Herzl and the Armenian Question
(https://www.jstor.org/stable/2536529)
Anonymous
Wed, 23 Jun 2021 02:31:29 GMT
1c2aec9
?
No.311034
>>311018
Bumping a Very important Thread. The Armenians are Still being massacred to this day. FUCK TURKEY,FUCK AZERBAIJAN ARMENIA FOREVER!
Anonymous
Wed, 23 Jun 2021 03:44:46 GMT
5aa989c
?
No.311038
311042
Even nowadays anti-Armenian sentiment is present in Israel and the widespread Jewish community, they either justify the slaughters or simply deny any of them happened, usually saying things like: "Armenians were terrorizing the population of Turkey" or "A genocide never happened, it was war-time, things get messy, people die." And in general the denial of genocides (outside of the Holohoax)

From the Jewess Barbara Lerner Spectre:
"On many blogs and websites, Armenians often accuse these scholars of being part of a Jewish and/or Zionist conspiracy because Israel has always steadfastly rejected the genocide charge, as Turkey’s own Jewish citizens do. In America, all of the existing long-established Jewish organizations also reject it (that is, until last month when one major American Jewish organization capitulated under mounting pressure)"
(https://www.nationalreview.com/2007/09/judgment-time-barbara-lerner/)

From the 9th President of Israel, Shimon Peres:
"We reject attempts to create a similarity between the Holocaust and the Armenian allegations. Nothing similar to the Holocaust occurred. It is a tragedy what the Armenians went through but not a genocide."
(https://web.archive.org/web/20071214075836/http://findarticles.com/p/articles/mi_qn4158/is_20010418/ai_n14382462)

In 2007 the Jewish ADL fired it's New England regional director for suggesting they recognize the Armenian genocide
(https://archive.boston.com/news/local/articles/2007/08/18/adl_local_leader_fired_on_armenian_issue/)

Guenter Lewy is a German-Jew who wrote extensively about the Holohoax but actively denied any claim that the slaughter of Armenians or Native Americans could be a genocide, or the slaughter of gypsies (not defending gypsies here). Choosing actively only to focus on Jews and their manufactured suffering in books like: "Nazi Persecution of the Gypsies", "The Armenian Massacres in Ottoman Turkey: A Disputed Genocide" and "Were American Indians the Victims of Genocide?"

And at large the entirety of Israel refuses to acknowledge the Armenian genocide ever happened, because they know it's one genocide they helped happen and even engaged in, articles here, some people will argue that now because lone Jews are recognizing the Armenian genocide that makes up for them spearheading and denying it for a hundred years:
(https://www.timesofisrael.com/before-the-holocaust-ottoman-jews-supported-the-armenian-genocides-architect/)
(https://armenianweekly.com/2018/09/10/the-hypocrisy-of-israels-denial-of-the-armenian-genocide/)
(https://foreignpolicy.com/2019/04/24/israels-refusal-to-recognize-the-armenian-genocide-is-shameful-and-immoral-netanyahu-turkey-azerbaijan-yad-vashem-tsitsernakaberd/)