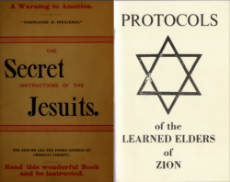 Anonymous
Fri, 16 Apr 2021 10:18:32 GMT
ad0b6b7
?
No.306033
306061
What's up with The Protocols of the Elders of Zion? I recently downloaded the pdf from archive.org and read it completely and it really reminded me of Monita Secreta (The Secret Instructions of the Jesuits) in the fact that it posted itself as a leaked book of secret instructions that the group it's referring to have to follow in order to establish world domination, one being about Jesuits and the other about Jews. I noticed there's a major overlap between the two as well in it's contents, for reference Monita Secreta came out in 1615 and is believed to be published by Jerome Zahorowski, a former Jesuit who was expelled from the society of Jesus in 1613 for "disciplinary matters."

Monita Secreta states that Jesuits use these tactics to push their agenda for world domination: assassination plots, defamation of opponents, the promotion of the idea that Jesuits are motived by pure motives, control of banking, media and the general act of seizing control over assets to further Jesuit control over the world, I know there's a small debate about whether or not the protocols are legitimate, even within circles of "anti-semites" so I figured I'd post this just to see if anyone else can see the similarities or what their opinion on the matter is. I thought it was interesting when comparing the two books side by side, I'll attach the PDF for Monita Secreta for ease of access.
Anonymous
Fri, 16 Apr 2021 19:18:07 GMT
74c8a9c
?
No.306061
>>306033
The jizzuits, like mormons, pentacostals, amish, hutterites, and other denominations that, quote, "hold true to the (((old testament)))", end quote, are crypto-kikes.
1 replies |  2 files |  2 UUIDs |  Archived
;
[Go to top] [Return] [Catalog] [Archive]