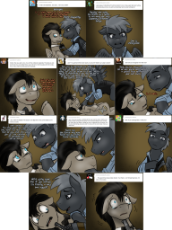 The link between globohomo, SJWs and Domestic Abusers
Anonymous
Wed, 23 Dec 2020 18:52:22 GMT
7185801
?
No.295034
Throughout the years reading stories of domestic abuse survivors, I've noticed that a lot of them line up quite well with classic jew and SJW tactics.

Doxxing, the fear of losing your entire life and reputation to a systematic gossip chain of cry-bullies. The unwarranted obligations to kotow to these people else you risk their wrath, and the guilt they force upon you for not pleasing them.

Their most preferred weapon. The easiest weapon to use against people, a weapon useless against the strong-willed and kind.

Another classic domestic abuser tactic- a very familiar one. In private an abuser will scream, hit, and lie to you at any chance they get to satisfy their broken ego. But the moment you snap, they act like the victim, even to the point of projecting their own crimes onto you.

Grooming
Imagine, cult-style indoctrination except it's one person doing it. The best tool to an abuser is an enabler, grooming is how abusers breed- they take good, normal people, then they emotionally (and often physically) beat them into submission to try and make that person a prisoner. If the abused person succumbs, at best, they get battered-spouse syndrome. At worst, they turn into an abuser themself. Bonus points if the one being abused is a child, as it gives them double the power feels.

SJW-indoctrination is exactly like this. But they can be cured, kindness is the best way to start that.

Children of jews have no problem parking in a handicap spot because they would rather throw money at a ticket than have thier nonexistant time be wasted, despite the fact that they're breaking the law, and they're indirectly wasting their own time doing this in the first place.

Those with zero regard for small boundaries have zero regard to large ones. Corporate dragnet spying is a prime example of this disregard for boundary, using excuses to violate privacy on a widespread level and make a one-stop-shop for blackmail.

Just like SJWs who pull sob stories about how they were raped by their "supposed friend" that they had sex with. Especially if it turns out that person they had sex with was actually drunk or high as fuck.

The reasons they "don't know why this happened" don't exist at all.

Scapegoating and Favoritism
Oh, I know how familiar you all are with this one.

White, Black, Scapegoat, Golden child. Yet when the Golden Child goes against the abuser, they become another enemy. Both Gamergate and the protests show how fast these people are willing to play and kill favorites.

Just like how white people are scapegoats for the SJWs, and the black people are their golden children. Yet every time a black person speaks out against the SJWs, they try to talk him down or defame him to death.

Absolutionist Mentality
There are no in-betweens to abusers, it's either "my way, or the highway". Just like the jewish mentality of acting like you have to keep all the money in the world, or else you're a retard the eyes of their parents/superiors/authority.

Projection
Projection is not just an SJW thing, it's an all-around abuser thing. They really have no self awareness.

Addiction to power highs=
The only logical explanation to any of the shit that makes you go "why would you do that?!". Why do they gaslight and lie to their families? Why do they spend millions of dollars on elaborate schemes that put them nowhere but in the red? Why do they consume/transfuse the blood of children when there is neither a sound scientific or occult reason for it? Because they get high from the power rush.