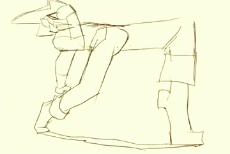 >>165368
Why do you hate AnCap and small government?
Anonymous
Sun, 12 Aug 2018 09:33:27 GMT
????
?
No.165397
165398
>>165394
Civilisation requires stability, order provides that stability, anarchy erodes it. Like communism, anarcho-capitalism sounds nice, but it doesn't work in practice for the simple fact that freedom is defined differently by many different people and that system assumes everyone has the same definition of freedom. It requires everyone to be fundamentally the same person for it to work, it requires total consensus which isn't possible given the human condition. 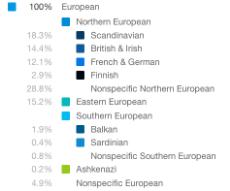 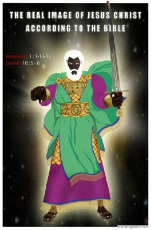 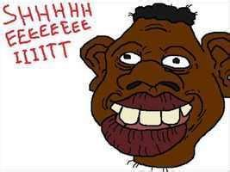 >>165437
>Revelation 1:14-15 "His head and his hairs were white like wool (the wooly textured hair of the negroes - black people), as white as snow; and his eyes were as a flame of fire; and his feet like unto fine brass, as if they burned in a furnace." Jesus Christ skin color is so dark that the Bible compares it to brass that had been BURNED in furnace! SO JESUS CHRIST IS A VERY DARK SKINNED BLACK MAN.
http://therealjewsareblack.com/lessons.html
…
>Are the angels black? Yes, read Ezekiel 1:7, 27-28.
http://therealjewsareblack.com/lessons.html

7 And their feet were straight feet; and the sole of their feet was like the sole of a calf's foot: and they sparkled like the colour of burnished brass.
https://www.biblegateway.com/passage/?search=Ezekiel+1%3A7&version=KJV

>Q) ARE THE SO-CALLED NEGROES IN AMERICA AFRICANS? NO!
>A) THEY ARE THE REAL HEBREW ISRAELITES (JEWS)!

>Read Exodus 11:7 "…That ye may know that the Lord doth put a difference between the Egyptians and Israel. It's not about COLOR it's about BLOODLINE.
>The Africans (dark skinned people) descend from Ham; read Genesis 10:6 while the Israelites come from Shem, Genesis 10:22 (chapter 11 shows the lineage from Shem to Abraham). THE REAL JEWS ARE BLACK (referring to people of brown color) ACCORDING TO THE BIBLE.
>Read Jeremiah 14:2 - "Judah mourneth (in sorrow) and the gates (the leaders) thereof languish (grow weaker), they are black unto the ground (meaning different shades of brown).
>Read Isaiah 29:22 "…Jacob (Israel) shall not now be ashamed, neither shall his face now wax pale (meaning the Jews would never be Caucasians). We went into slavery because we broke the laws of THE MOST HIGH, read Deuteronomy 28:15-68. (Read verse 68 especially; it describes the Israelites being sold into slavery by way of "ships") And the Lord shall bring thee into Egypt (bondage) again with SHIPS, by the way whereof I spake unto thee, Thou shall see it (Jerusalem the homeland) no more again: and there ye shall be sold unto your ENEMIES (the whiteman) for bondmen and bondwomen (slaves), and no man shall buy (save) you. 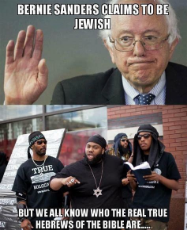 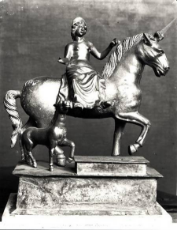 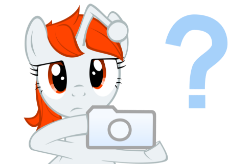 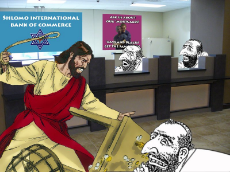 Ok, I abhor the Jews as much as anyone, but we have to approach this rationally. How do we solve the Jewish Question in a way that is best for our people?

Of course you can say "genocide them all," but would that really work? Let's say you get control of a Western country, say America. Before you even start on your zealous campaign do you think the worst of them would still be here? Of course not, they're a shifty and rootless people. Soros and his ilk would grab what they can and flee to a safe place, such as the UK. From there they would continue to destabilize your country with internal insurrections. These would happen, simply because of how objectionable your policy would be: even if you redpilled the majority of Americans on the JQ, most of them would oppose outright extermination as it stands against every concept of human rights they have. Keeping such a program hush-hush would be impossible simply by the nature of it and the society we live in.

Additionally, all the other countries that Jews control would instantly put trade embargoes and every sort of sanction on America, if not an actual shooting war. America could stand on its own, but the sudden shift to pariah status and the economic hardships would only fuel instability. You'd be gone before you could say "Nahtzee."

But, let's say we're so successful that we manage to take total control of every Western country near-simultaneously. We'd certainly get a good number of 'em then, but again all the important ones would escape to other countries where they would lie low and pretend to be tourists or whatever. What are you going to do? Declare war on the rest of the world to root out a handful of refugees? There is no way you could get them all because this is what Jews do best: migrating to other countries and changing their identities. They'll form their own little enclaves and they'll come back. It might take 500 years, but they'll come back.

What are our alternatives? We could 1) Let them be (BAD IDEA), 2) Expel them, or 3) Keep them but limit their reproduction and social life (similar to Hitler's policy)

I personally think 3 is the best solution. 2 would work in the short term, but as others mentioned they'll come back eventually once the culture becomes less discriminating. If you cultivate a cultural consciousness of the evil of Jewry, you can ensure the Gentiles will remain distrustful in the time needed for Jewish genes to dilute and/or die out.

I also find it is more humane, though humanity towards our enemies gets flak for obvious reasons. I don't believe in the myth of "good Jews," but I recognize that their behavior is a genetic tendency and is reinforced by culture. That is to say, they are not a collective hivemind. While the vast majority of Jews act like Jews in one way or another, a handful win a genetic lottery or grow out of such preponderance for deceit and greed. Such people genuinely seek a more beneficial outcome for their host nations or for humanity to the extent that they will stand against their parent culture, if not expose it outright; the former would be Mises while the latter would be Brother Nathaniel. It's just important to realize that these people are aberrations, ideological mutants in a race that requires cultural subversion to survive. For this reason I morally oppose extermination (though gassing the Zionists and Marxists is of course acceptable) as it contradicts my sense of Justice; a far better alternative is a more peaceful weeding out as I explained.
Anonymous
Sun, 12 Aug 2018 18:30:55 GMT
????
?
No.165554
>>165553
option 4 kill the ones within the borders then force the rest of the countries to hand over their jews for gassing.
Anonymous
Sun, 12 Aug 2018 22:04:50 GMT
????
?
No.165587
>>165553
Pretty much this.
I also think that we shouldn't underestimate our own ability to change people through words alone. There is this porverb 21:22 that goes like this: "One who is wise can go up against the city of the mighty and pull down the stronghold in which they trust."
Hitler, Jesus and Gandhi (even if I don't really know much about Gandhi's case since I suck at history but from what I have heard) actually did this and succeded or atleast made a very large impact on people. I know a nationalist in sweden named Jonas de geer. He with some others made a news papper like twenty years ago that critised sweden's immigration policy, feminism, the gaylobby and actaully jewish power. He even ended up debating on our main teve channel against three others in which he WON by a landslide. https://www.youtube.com/watch?v=wtDzamywpW4
I know you can't understand what they say. The reason I posted the video was to show how he handled the debate. He was clam. He used arguments that were relavent to the discussion. He didn't look uncomfortable. Well, I might not breakdown everything he did retoricly well.
I have been thinking about doing it myself for a while now. I am intending to put up articles on my university campus. My own articles.
I guess you could say that they controll media and you would be right. I just think there might be a way for us to outsmart them.
Anonymous
Wed, 15 Aug 2018 21:29:02 GMT
????
?
No.166144
166149
i have read something that sounds a race traitor stuff, some weeabos say that if white people and asians mix each other they can achieve an ethnocentrist society Japan style because the asians control their countries without jews and never let jews enter in their society…

i think this will only make asian ethnia to be weaker in those terms , but also whites to be more self aware of their own poeple…

what do you think?
Anonymous
Wed, 15 Aug 2018 21:57:03 GMT
????
?
No.166149
>>166144
I think in general racemixing should be avoided, but if you're going to do it Asian/White is probably the ideal combination. Whites have higher empathy and Asians have higher intelligence so each side is theoretically gaining a portion of what the other has without losing too much of their original advantages. With every other pairing you're only muddying your own genes without gaining anything of value.

Besides, if Europe and the Americas can't turn back the tide of The Blackening, odds are we'll have to seek refuge in Asian countries for a century or so as they will likely become the new center of civilization. Living in their countries and consuming their anime but refusing to plow their women and cuck their tiny-dick men would frankly just be rude.
Anonymous
Thu, 16 Aug 2018 06:32:27 GMT
????
?
No.166230
>>165553
I do not want to condemn the entire people for the actions of their elite and what seems to be in their nature. I will reprimand them for it, but I want to see them able to survive as a people. In my world, the current leadership of Israel and any very prominent jews would be largely liquidated. Then, with a clean slate, the everyday jew could build anew, under protection and surveillance. I would give them two strikes, with the first resulting in loss of their state, second in extreme curtailing of their reproductive rights, and the third strike meaning annihilation. I try to be merciful.
Anonymous
Sat, 18 Aug 2018 02:27:54 GMT
????
?
No.166422
In a serious manner, i do belive that only kikes and their supporters shall be destroyed.
Anonymous
Sat, 18 Aug 2018 04:09:48 GMT
????
?
No.166427
>>165394
holy fucking cringe
this is why ancaps are the butt of many jokes
56 replies |  12 files |  1 UUIDs |  Archived
;
[Go to top] [Return] [Catalog] [Archive]