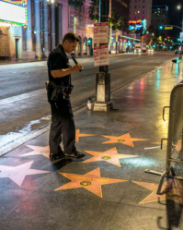 Anonymous
Fri, 10 Aug 2018 09:14:58 GMT
????
?
No.165030
165035 165052
>Donald Trump's star on the Hollywood Walk of Fame — destroyed on several occasions by detractors who sometimes wield a pick-ax — mysteriously multiplied over night so that on Aug. 9 there were several dozen stars.
>The effort comes from a conservative street artist who wishes to remain anonymous, but he says he was motivated not only by the destruction of the president's real star, but also a recent unanimous vote by the West Hollywood City Council to recommend the removal of Trump's star due to accusations he has mistreated women.
>The anonymous artist says he's not done with his mission to preserve Trump's star. "Rip up the president's Walk of Fame star or try to have it removed — like you're the mayor of West Hollywood or something — and 30 more will pop up," the artist tells The Hollywood Reporter.

>The artist and his cohorts, who call themselves "The Faction" and are allies of prolific conservative artist Sabo, spent $1,000 on the stars, which they printed on sheets of floor vinyl with adhesive backing, and their mission was partially financed by "a young and anonymous entrepreneur."
>The crew laminated the vinyl stars and placed them on blank squares on the Walk of Fame, though kept them covered until all were secured into place so that onlookers would not know exactly what was happening.
>"I didn't want to get hit over the head from behind. We thought Trump Derangement Syndrome was a joke, but I'm pretty sure it's real," the artist said. "If no one peels these off, they could last there for 10 years." 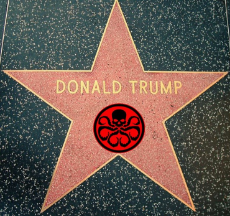 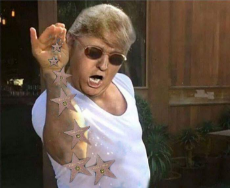