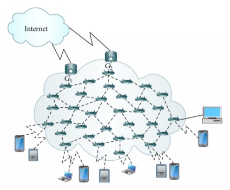 Building a parallel Internet free from government control used to be a regular topic in hacker circles 5-10 years ago, but I haven't heard much about it lately. Considering that we're seeing codes of conduct at hacker cons and open support for lefty politics and for doxing "nazis and racists" I doubt that there is much enthusiasm for things like alternative social media though.

But it's definitely possible to build an alternative internet as a group of people with a common interest. You need money to put up masts (or rent space on existing ones?), radio link hardware that isn't that expensive nowadays, and you can actually build your own network backbone. Hooking people up through wifi could be trickier, maybe you'd want to use short haul links to separate neighborhoods and then wifi only to nearby buildings.

Also not selling the concept as "we're building the alt-right Internet!" is probably a good idea. A non-centralized network owned by the users, free from corporate and government influence (Druumpfh!) is something many people could get behind.
14 replies |  1 files |  1 UUIDs |  Archived
;
[Go to top] [Return] [Catalog] [Archive]