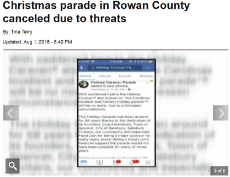 A holiday parade that has taken place for nearly 60 years will be canceled because organizers have received threats.

The community is shocked and angry.

“Canceling a parade, a Christmas parade that they do every year -- that's ridiculous,” resident Liz Crunkleton said. “It's ridiculous. It really is."

The Holiday Caravan Parade usually marches through the streets of Spencer and Salisbury.

However, this week the parade board posted to Facebook and said it was dissolving the parade due to hate mail, email, and threats.

Last year, the board booted a parade participant, Avita Pharmacy, from the parade due to non-compliance.

The board said Avita tried to display LGBTQ rainbow flags and other times that weren’t pre-approved on the float.

In a statement, Avita Pharmacy said, in part, it would love to see the parade continue in a way that is “welcoming and inclusive of all groups.”

"Hopefully, we'll be able to bring our communities together and still have our parade,” Salisbury Mayor Al Higgins said.

She said that she and Spencer’s mayor have reached out to the parade organizers to find a resolution."

I say we should support our fellow Christians and let them have a parade, if they want a fight, it should be everyone pitching in to prevent violence and push back if it ever breaks out. I mean kids go to this to see santa and celebrate in Christ and a bunch of faggots are going to have it canceled due to violence. It is bad enough that the police force is understaffed as it is because they too are afraid of all these "chimp outs" and being demonized by the media for doing their job. 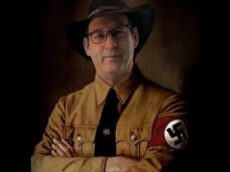 The event organizers should also be shamed for letting terrorists win. Their canceling of the parade shows other deranged individuals that threats of violence and terrorism works. By canceling the encourage others to partake in terrorism as they have shown with their actions that terrorism works.
And then there should be massive handouts that explains how the LGBQ community through threats of violence forced the Christmas parade to cancel. Make every kid in the town fully aware of the reason Christmas was canceled. Make it so that when these kids grow up they will not bend the knee to the will of deranged people.
Anonymous
Fri, 03 Aug 2018 07:42:31 GMT
????
?
No.163224
163314 163445
>>163189
Also archived the news article (when archive.is don't work waybackmachine sometimes do)
https://web.archive.org/web/20180803053108/https://www.wsoctv.com/news/local/christmas-parade-in-rowan-county-canceled-due-to-threats/803663629
Anonymous
Fri, 03 Aug 2018 08:07:38 GMT
????
?
No.163232
File (hide): 2BCFCFFE92FBD5EFC834864CDE127AE0-69741.jpg (68.1 KB, 625x467, God hates fags.jpg)
[Bing] [wait] [Tineye] [Yandex] 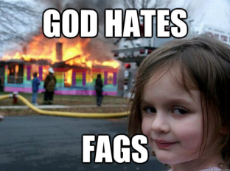 It aches my heart knowing though that so many things like this happen yet no one pushes back, they are too afraid to do so and they submit to the violent left. The moment the right stands up, they are racist, homophobic, xena warrior princess phobic and what ever phobic there is. You know something? Phobia is Greek for fear. I guess they are right, the Right Conservatives fear the left if they are afraid enough to cancel a Christmas parade and allow a Christian Holiday to forcefully stand down on defending their right to religion. Fear is a good word.

However, I fear not the left, I don't stand down. Fear is not what I am, I rather hate. I hate that others wish not to stand up for what they believe, I hate that the left makes every issue about themselves and forget everyone else, I hate that degeneracy overrides sanity, I hate that we are overran with people who do not belong in our country yet we are the evil ones for sending them back.