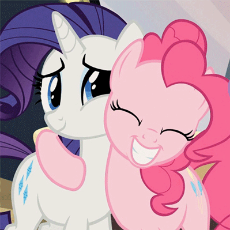 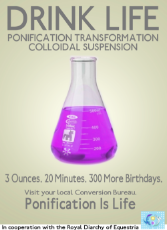 >>162997
The Conversion Bureau. In a dark future where the planet is rapidly dying due to pollution and barely any of the air is breathable, Equestria shows up between UK and America in a magical barrier that's slowly expanding. The barrier erases all traces of human civilization, buildings and pollution included, like a big Elements of Harmony wave. This Equestria is a dimensional travelling anomaly that will perpetually jump from reality to reality to grow in size. Humans lack souls, so if they touch the barrier or any other magic thing, they die. "Queen" Celestia makes a deal with the world's governments: Set up Conversion Bureaus across the world and distribute free "Turn from human to pony" transformation potions.

Take the potion, become a pony, get shipped to Equestria, and live in some new Newfoal Community far away from the mane six and the rest of pony society, where you'll be taught how to bake goods and cook meals and make shit out of wood. As the barrier expands and devours more of earth, more land is teleported and added to the Equestrian landmass, while magic makes it full of resources.
Anonymous
Thu, 02 Aug 2018 16:30:10 GMT
????
?
No.163038
I HAVE CONFLICTING FEELINGS OVER IT
Anonymous
Thu, 02 Aug 2018 17:25:21 GMT
????
?
No.163052
163088
>>162981
>Conversion Bureau
It's an excuse to show human supremacy against ponies and is almost always OOC from the show. No one has done a single Conversion Bureau fic that is actually interesting.
Anonymous
Thu, 02 Aug 2018 21:39:12 GMT
????
?
No.163088
>>163052
There was one I saw that had a fairly basic but interesting concept. It involved another portal opening up between a victorious post-war Earth and a show-accurate Equestria. It suffers a bit from human-supremacy syndrome, but at least the in-context Celestia is a nice change of pace. Since I'm absolute crap at explaining things in greater detail, I'll just link the fic here:
https://www.fimfiction.net/story/173606/the-conversion-bureau-setting-things-right 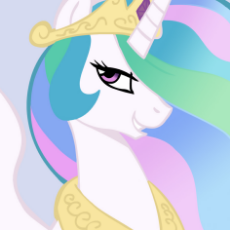 The first and only Conversion Bureau fic I read involved a rando transforming into alicorn Derpy, followed by Sunhorse going on a murderous rampage to remove derp. All because another alicorn threatened her rule, or something.

Though I heard she took over for some guy who tried to write a "How earth became Equestria and why we occasionally see human shit lying around" story who gave up when he noticed he made it super anti-human accidentally.
Anonymous
Fri, 03 Aug 2018 15:07:33 GMT
????
?
No.163294
163295 163296
>>163139
I though this was the orignal story.
https://docs.google.com/document/d/1ERvIakzNX5y1zeIgLYZZKVtAYO8d6_YQNVHl9CK_WMM/edit?hl=en_US
The one that they are commenting.
http://ponyriffs.weebly.com/non-riffverse.html
Also, this site is pretty funny but not as it was intended. It seems to be your typical liberals that are critical. The whole site is like a culture of critique. Oy oy oy!
Mostly of the stories that they commment on the site are completely worthless stories. They seem to think that it is an easier target to make fun of and it is. However, more often than not they just point out the obvious flaw or say something like, "This is stupid" and leave it at that. What I am trying to say is that most of the thing on that site isn't worth reading since the commentators are not funny. They think they are because they have picked an easy target but they forget to actually create a joke with the material that they have.
But there are two other stories that have been commented on on this website that I can recommend.
This first one I found today. It is kinda of funny to see their comments. They really get mad about this story. It is just a dumb story. You can just see how self-aware the writer of the story is. He is trolling and they all take the bait. Yeah, I know I should not be so spiteful
https://docs.google.com/document/d/1d2iOJXfs44nPjBJfvhLS3vFKqCp8lNyPQXl3vhjyOWo/edit
This one is just funny.
https://docs.google.com/document/d/1ERvIakzNX5y1zeIgLYZZKVtAYO8d6_YQNVHl9CK_WMM/edit?hl=en_US
Anonymous
Fri, 03 Aug 2018 15:10:32 GMT
????
?
No.163295
>>163294
I meant this one is just funny http://ponyriffs.weebly.com/fft3k-past-sins-part-1.html
Anonymous
Fri, 03 Aug 2018 15:20:48 GMT
????
?
No.163296
>>163294
maybe not recomend but whatever
17 replies |  3 files |  1 UUIDs |  Archived
;
[Go to top] [Return] [Catalog] [Archive]