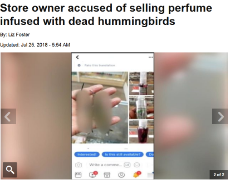 This I saw on the tele this morning and though as to share. From a spiritual shop here in the city some Mexican is selling perfumes that have actual dead humming birds contained in the bottles. This is worse that when I saw on the food network Mexicans having roaches in their candies, really what the heck is wrong with these people and their obsession with dead things, they are worse than Timm Burton.

Anyway, Humming birds are protected species so when these perfumes made it to the store owners facebook page it raised many questions.

Oh and by the way, they say this perfume is supposed to be some "love" perfume or an aphrodisiac. 'Yeah lets just get in the mood by rubbing some dead corpse all over our bodies. Yeah there we go. So hot…' 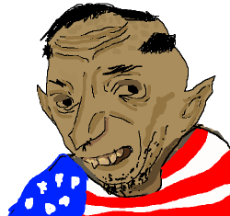 >>162343
they shouldn't be aloud in the country.
Anonymous
Mon, 30 Jul 2018 06:22:59 GMT
????
?
No.162347
162353
>>162346
It is why we are "Building the Wall". The only thing that disapoints me is the fact that we the US citizens are forting the bill, because that does bite. I say why not sanction Mexico till they foot the bill, they keep flooding into the US and we are doing more to keeping them out then they are trying to keep them in. I would love to go to war with Mexico, I would revel in the moment we can after so many years finally clean up this nation, and get revenge for the Alamo.

They come over here, cry because they dont' want to learn english and have to have dual signs just to accommodate their sorry asses. They practice "Santa Maria" voodoo, will not assimilate to our culture, steal our wages, bring over the guns, drugs, and crime. They take our jobs and wealth, don't pay taxes and give nothing to the country, the people and yet they spit at our nation and cheer in the streets shouting "La Raza!, La Raza" And on top of it, make a mockery of the US and the stupid Americans by celebrating Cinco De Mayo, which is no different if we allowed the Muslims to celebrate 9/11 as a national victory for Islam.

There is something horribly wrong with Mexicans, and is why they should keep the hell out.
Anonymous
Mon, 30 Jul 2018 06:27:32 GMT
????
?
No.162353
162357
>>162347
>why not sanction mexico
because thats racist goyim!
shitpost aside,we should have annexed mexico in the Mexican-american war, and did those savages like the Indians.
the only reason they are here is to vote for the democrats anyway.
Anonymous
Mon, 30 Jul 2018 06:40:49 GMT
????
?
No.162357
162367
>>162353
The Native American Indian in my greatest of opinions are less savage than the Mexican. In fact I hold them to be of more value than the Mexican. Why? Race Mixing. The American Indian is pure, of a solid race, smart and capable. The Mexican is a mutt formed when the horn dog spanish decided to create a new race by raping the natives of south america. What we have are mutts of genetic monstrosity and they are savages.

But yes, the mexicans are only here because real americans don't want to vote Democrat anymore, they are leaving the party and running to the right.

Case and point is California, San Diago and Boston, MA is now making it LEAGAL for the illegal immigrant to vote in elections. Upon the Sanctuary Cities, and their press for open boarders, yeah, they want to displace the actual citizens so they can seize power. The worst of it though. What happens when all white men are displaced, democrats win and the nation is full of blacks and mexicans? I fell the very people they flooded in will turn on their masters and the country will end up like Hatti.
Anonymous
Mon, 30 Jul 2018 07:23:01 GMT
????
?
No.162367
162429 162434
>>162357
>The Native American Indian in my greatest of opinions are less savage than the Mexican. In fact I hold them to be of more value than the Mexican. Why? Race Mixing. The American Indian is pure, of a solid race, smart and capable. The Mexican is a mutt formed when the horn dog spanish decided to create a new race by raping the natives of south america. What we have are mutts of genetic monstrosity and they are savages.
we cucked the indians pretty hard. look up how savage they were before we btfod them. i suggest scalp dance. the same could have been done to the mestizos.
https://www.youtube.com/watch?v=sruc1oxT01g

> San Diago and Boston, MA is now making it LEAGAL for the illegal immigrant to vote in elections.
pretty sure thats unconstitutional
Anonymous
Mon, 30 Jul 2018 10:10:27 GMT
????
?
No.162429
162434
>>162367
The only thing I agree is that we should of shot them all to hell for crossing our boarder. But to say that the mexican mutts and indians are the same and have the same idea that we kicked the indians ass and that why the half and half mutts want revenge, is ridiculous and ludicrous.

The Mexicans come from inbreeding and breeding with south american indians. Like England, Spain wanted the piece of the New World pie and sought out to conquer just like the English. France surendered to us and gave us Louisanna, Russia sold out thinking alaska was barren. Spain however wanted more and more and we had great spanish american wars to fight them and both the indians native to america and french aided in our efforts.

No, this isn't about some indian blood, it is a reconquista for kicking their asses back then and standing firm. However back then unlike the technological ineffeciant natives, Mexico was under strong Spanish influence and had something natives din't, firearms and warships. It is why we lost the Alamo, it is why we lost the battle of Puebla. They were just as matched as we.

The Mexicans of today are like the Jews of Germany durring the 1930's. They kept pouring in from Poland into Germany. Germany tried to send them back but they kept coming. Ghettos formed around their communites like here in the USA with Little Mexico and other sub-communities like China Town and Little Havana. The Jews changed the culture and plotted against the country they were in. Hitler tried to relocate them else where, even to Madagascar but to no avail. The boarder was getting worse till Germany got so sick of it they started shooting them as they crossed. Immigration detainment camps were called death camps and concentration camps. And Germany was forever the bad guy.

Look at today. America the Mexicans are running right though, we have no way to slow them down. We are detainting them and the detainment camps by the MSM are being called Concentration camps. Rumors spreading that children are being raped and murdered as we lock them in animal cages. Imagery on the MSM is being Juxtaposition next to Auschwitz. The same Jewish lies are being sewen, the same that started WWII. Our national seeing president is made up to be Hitler, a nazi and so on because thouse words have be filled in our head as being evil.

>>162429
>But to say that the mexican mutts and indians are the same and have the same idea that we kicked the indians ass and that why the half and half mutts want revenge, is ridiculous and ludicrous.
thats not what i said. i said that we could have annexed mexico in the MEX-American war, then i said in >>162367 they should have been put on reservations. i never implied that they want revenge for the Indians, in fact they probably don't even care about that.
but reservations would have been too kind.we need death squads on the border.
Anonymous
Mon, 30 Jul 2018 10:36:26 GMT
????
?
No.162439
162444 162571
>>162434
I wasn't speaking about you, but the video and what he was saying in it. The speaker was making the mexicans as the same as indians, both in his words, savages, and that we should of swept across and easily defeated them. Wishful thinking but no.

Annexed is such a light word, nah, conquered is more like it. It may of taken years but if we had a full national effort against mexico, we probably wouldn't of had the whole civil war or it would of played much diffrently. We would of been too busy with mexico our men would be exhausted to fight another war.

Mexicans and Natives closely related genetically, yeah, Spaniards raped the natives. But their whole culture is worlds apart. The mexicans who are half and half beleive that the Spanish half entitles them to everything the Spaninards have.

It is the same bullshit being preached to the children today with "White Privilage". White man has everything and is "Suppressing" the black man. In turn it encourages Race Mixing in hopes that they will then be Entitled to "The piece of the Pie" Same with the Mexicans, mongrols that are half and half and think that they are entitled to Spanish claims, when they are genetic disasters with savage tendencies.

Heck even the natives of South America were smarter than their mixed breed offspring. With cities that floated on the water, great pyramids and calender's that recorded and predicted astronomical events, granted they practiced human sacrafice, but really they were smarter people. What have the mutticans gave us? Nothing but an evasion, drugs, and murder. They still living in a shit hole down there.
Anonymous
Sat, 11 Aug 2018 08:21:59 GMT
????
?
No.165166
165174
>>162339
ok ok, to be fair… have you smelled a dead hummingbird before?
Anonymous
Sat, 11 Aug 2018 09:57:02 GMT
????
?
No.165174
>>165166
I don't think that I want to smell a dead anything, it is bad enough I dealt with dead pets before, roadkill, and even dead bodies of humans because hurricanes are killers. The last thing I want to put on my face or body is anothers dead body. Oh and they think that this is a aphrodisiac.
14 replies |  3 files |  1 UUIDs |  Archived
;
[Go to top] [Return] [Catalog] [Archive]