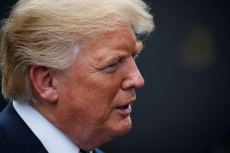 Anonymous
Thu, 26 Jul 2018 00:16:09 GMT
????
?
No.161288
>A federal judge on Wednesday rejected President Trump’s latest effort to stop a lawsuit that alleges Trump is violating the Constitution by continuing to do business with foreign governments.
>The lawsuit, filed last year by D.C. Attorney General Karl A. Racine (D) and Maryland Attorney General Brian E. Frosh (D), cleared an initial hurdle in March. Back then, Messitte settled one legal question, ruling that the plaintiffs had legal standing to sue the president in the first place.
>He also limited the scope of the case to Trump’s Washington hotel; previously, the plaintiffs had also wanted to search for foreign-government spending at other Trump properties as well.
>The next unsettled questions: What, exactly is an emolument?

>The Constitution bars federal officials from taking emoluments from any “King, Prince, or Foreign State.” The Founding Fathers’ intent had been to stop U.S. ambassadors overseas — emissaries from a new, poor, fragile country — from being bought off by jewels or payments from wealthy European states.
>But the modern meaning of the clause had not been settled because most presidents — acting on the advice of their attorneys — had steered clear of business entanglements while in office.
>Trump, on the other hand, has kept ownership of his business empire, including more than 10 hotels and golf clubs around the world. Although Trump has said he gave up day-to-day management of his businesses, he still owns them and can withdraw money from them at any time.

>At the hearing in June, the plaintiffs had argued that when applied in a modern context, the Constitution’s ban on emoluments should ban transactions such as those.
>They said that emolument in this case should not just mean an outright gift but also any transaction that gave Trump “profit, gain or advantage.” That means it would apply to transactions in which a foreign government paid Trump’s company for a service or a hotel room.
>But Justice Department attorneys, defending the president, said that this definition twisted the Constitution’s original meaning.
>They said the president is not breaking the law when foreign officials book rooms or hold events at his Washington hotel because they are paying for something and not giving Trump a gift.
http://archive.is/6Tskl

Are they playing "chess" here?
When Trump is exonerated because the foreign actors paid a set price anyone would have to pay to stay at the hotel, and it wasn't a gift, will it open up the hurtbox for Hillary? Hillary's Clinton Foundation got Gifts from foreign state actors, and according to her "did not get anything in return".
0 replies |  1 files |  1 UUIDs |  Archived
;
[Go to top] [Return] [Catalog] [Archive]