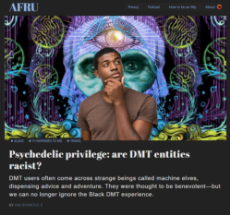 >Safe and recreational drugs is one of the many important cultural contributions that folks of color have made in the 20th century. Whether it’s responsible Hennessey drinking or the cornucopia of culture that is cannabis, we invented it long before white folks prostituted it to consumerism. But there’s one drug that’s unquestionably and uniquely shrouded in whiteness — a “white drug,” if you will. We’re not talking about cocaine: it’s DMT.
>One person reported that their first trip was good, but their second trip took a turn for the worst. “This time, instead of the sacred, I was greeted with the profane, and saw cartoons of racist caricatures mocking me. They were malevolent and it felt like I could die,” they reported. “As much as the first trip was welcoming and accepting, the second trip was pushing me away and I felt a strong sense of ‘NO.'”
>The most chilling experience reported so far invokes the powerful imagery of the slain Emmet Till. “I was surrounded by the elves, and they all started chanting ‘Emmett Till,'” the trip report began. “I later learned that Emmett Till was a Black man accused of harassing a white girl in the 1950s. I had never heard of this story before, being a Black man who grew up in a white school district. Then, the elves started to rush me and they all picked me up and started chanting the n-word while carrying me. The elves threw me down a black hole and I continued to fall for around 10 minutes until my trip ended.”

Racist elves from alternate dimensions are harassing black people during drug-induced hallucinations. White supremacist overlords are convincing black incels to subconsciously hate their race by consuming "far right content" from "extremists" like Joe Rogan and Jordan Peterson. The world is a simulation run by racist AI bots. Blacks who use DMT are racist by extension because DMT was appropriated from "Latinx" culture by white supremacists. You can't make this shit up.

Seriously, I'm not sure how newsworthy this article is, but it's one of the funniest goddamn things I've read all year; I highly recommend reading it in its entirety. This is something you can point to the next time some leftoid calls you a schizo or a conspiracy theorist. 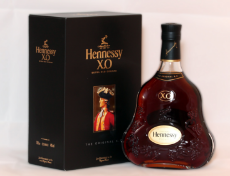 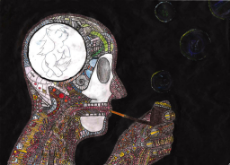 >>356842
>Safe and recreational drugs is one of the many important cultural contributions that folks of color have made in the 20th century.
>"Muh" culture be getting high 'n shieeett"
Lmao. Drug use isn't culture and every single fucking race on the face of this gay planet has getting high since the dawn of civilization.
>Hennessey drinking or the cornucopia of culture that is cannabis, we invented it long before white folks prostituted it to consumerism
Cannabis was used from Europe to Asia going back thousands of years and there is archeological proof of that. The same is true for 'shrooms.
>>356843
Also this. Next the pavement apes will delude themselves into thinking that they invented cognac.
The delusional egotism of niggers is fascinating. Maybe a coping mechanism or just inborn narcissism. 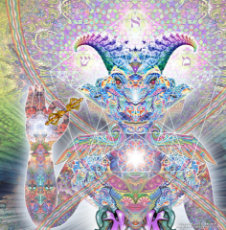 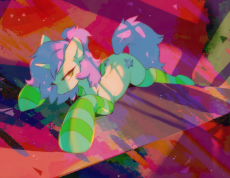 There are no "elves". It's a just a meme that gets unironically parroted by pretentious retards.
People just do psychedelics for the first time or two and rattle off about how it made them feel so special and how, in their delusional state, personified their distortions of reality by projecting something onto them.
The drugs aren't literally magic and they don't give you access to some hidden dimension. They just distort reality to the point that most people become hysterical and delude themselves into this bullshit to rationalize it.
Joe "The Literal Cuckold" Rogan and his consequences have been a disaster for psychonauts everywhere. It's like everything countercultural that goes mainstream gets brutalized by the retarded hordes of normies who moronically bastardize it.
Anonymous
Fri, 30 Dec 2022 04:38:05 GMT
7aacf9b
?
No.356874
>>356869
Looks more like the depiction of baphomet
>>356873
>they don't give you access to some hidden dimension.
I'm not so sure about that.
>Pic
that's one sexy horse
Anonymous
Fri, 30 Dec 2022 04:57:57 GMT
def8d0f
?
No.356875
356876
>>356873
If it's psychological that would certainly explain why people who spend every waking minute obsessing over how everyone is racist to them would hallucinate racist elves.
Anonymous
Fri, 30 Dec 2022 06:17:37 GMT
4b03da7
?
No.356876
File (hide): B8D602E4F37A2A34F8CA6CB21AF7F687-9066868.jpg (8.6 MB, 4000x3000, A.jpg)
[Bing] [wait] [Tineye] [Yandex] 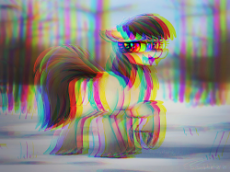 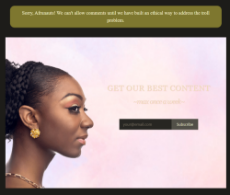 >>356842
>it's one of the funniest goddamn things I've read all year; I highly recommend reading it in its entirety.
I am doing so.

What I'm noticing here is that this guy's "best base scenario" is all non-white races banding together to fight against white people. While they choose to reside in white countries and don't even consider moving away to a different country filled with their people instead.

Also, I just noticed that the website calls it's readers "Afrunaughts" and is some sort of "black people and black people things all the time" website rather than the odd story of that type that happens to be published in a typical general audiences legacy news media source. I guess insanity like this really does come from the source.