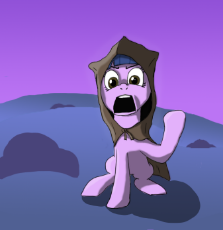 Twilight: Flash Sentry – two-dimensional, forced character who was eventually dropped when even Hasbro decided he was too cringe
Rainbow Dash: Zephyr Breeze – Fluttershy's complete loser brother, even RD is smart enough to stay clear of him
Fluttershy: Discord – cool villain, became an annoying side character after "redemption" (never was really redeemed, just became Fluttershy's little slave) and isn't a pony
Pinkie Pie: Cheese Sandwich – won out with a celebrity self-insert OC
Rarity: Pistachio from the Acorn Farm – this establishes her canonically as a wine aunt who grooms teenage colts
Applejack: nopony – destined to pass on the farm to Apple Bloom after becoming an old maid, big RIP

Let's face it, even in FiM's prime the writers were incapable of writing decent male characters, let alone good original coltfriends for the Mane 6. This is truly a show made by a feminist.

Anonymous
Mon, 26 Dec 2022 21:40:21 GMT
503f0c1
?
No.356787
>>356786
Why is purple a celtic priest?
Anonymous
Mon, 26 Dec 2022 21:44:21 GMT
4c60b7f
?
No.356788
356966
>>356786
Big mac who got sold as the mute guy but ended up being just too stubborn just like everyone in the apple family, ended up making creampies and probably creampied marble once but got cucked
Fancy Pants who despite being presented as the average cuntish high class character with a trophy wife he didn't cared for peer pressure and said whatever the fuck he wanted, again, has Fleur.
Shining, yes, one of the characters that were made just to sell toys ended up as a totally bro dad that did more of a parent figure to Spike than Twilight herself, also taken and with a kid.
Spike, who after years ended up becoming the chad he always wanted and probably had or has a harem because of dragon nature, unfortunatedly he ended alone as far as we saw, theres a few characters but the writers were fuckimg hacks and never did anything with them
Anonymous
Mon, 26 Dec 2022 22:59:32 GMT
686dbe2
?
No.356789
>>356786
Applejack is often called a one note background character by people too stupid to understand her and avoid writing off all that she is as "the farm girl".
AJ loves her family. Loves where she is in life. Lacks motivation to go out and do something adventurous for the sake of her dream because the way she sees it, she's already living the dream.
Apple Bloom has character. She's got goals, relationships, something she thinks she needs and something she really needs.
But Big Mac is a punchline. A prop. Despite the episode here and there saying stuff like "he is friends with Spike" or "he likes crossdressing" he wasn't designed to be someone.
Perhaps this is by design? Perhaps this is why so many men felt the urge to self insert into this family friendly slice of life harem anime.
Anonymous
Tue, 27 Dec 2022 00:14:29 GMT
50130ce
?
No.356791
356792
File (hide): 1C48BBB51942C58FCF659534FA6FD36F-48371.jpg (47.2 KB, 800x450, 8d9a4e18a300b5a06cc861c97a605ce7.jpg)
[Bing] [wait] [Tineye] [Yandex]

>even Hasbro decided he was too cringe
Lmao, Twifags were so ass-blasted over Brad. Good thing their daddy Hasjew came to the rescue.
Anonymous
Tue, 27 Dec 2022 01:07:45 GMT
686dbe2
?
No.356792
>>356791
Brad is a cardboard cutout without personality or soul. In a world that's supposed to be humanized FIM, they gave him and Sunset a skin tone as close to a normal human as they could get away with. EQG1 felt shat out by an executive's committee or AI. EQG2 tried to do something with the idea. That was the one with Sirens, right? After that they just fucking gave up. Sunset wants Sci-Twi to be exactly like Twilight Sparkle, because that's what a healthy Twilight looks like in her head, while Sci-Twi fundamentally isn't her. Different world, different backstory, different response to magic and different circumstances around getting it. The darkness within her is rage at how helpless she feels in a world that wants to decide what she is, yet she has no idea who she is anyway and neither do the writers. The movies could have pulled off something interesting with this character. But alas, she will only ever be bootleg Twilight getting in the way of Sunset being her own potentially interesting protagonist in her own setting.
Anonymous
Sun, 01 Jan 2023 20:43:33 GMT
9c734aa
?
No.356966
>>356788
wtf sister country on mlpol?
Anonymous
Sun, 01 Jan 2023 21:22:12 GMT
b21b4d6
?
No.356967
File (hide): 2160CA873B3A2247B7347E97EBCE50A2-125364.jpg (122.4 KB, 944x602, shipping.jpg)
[Bing] [wait] [Tineye] [Yandex]

>>356786
Original MLP was never about shipping, it was about friendship. That's why the original world lacks male characters for pairing.

It was about girls who didn't bully each other and where everypony could feel needed in the group for the things that made them different, instead of being scared of sticking out.