Equestrian Cosmic Mysteries: Patterns of the Night
Anonymous
Tue, 02 Aug 2022 07:59:34 GMT
fde0c94
?
No.349052
349060 353899
[Last 50 Posts] [Last 100 Posts] [Last 200 Posts]
After hearing the phrase about time in Equestria being measured in moons, I decided to go through and study some of the lunar cycles in the show. Little did I know that I would soon become even more schizophrenic than before, literally seeing stars. Before I thought it was a visual touch, but now I can't be certain of a grand conspiracy that remains dormant under the fabric of the show. This thread will log every appearance of the moon I found, which was my primary idea for the thread, but will also include oddities such as notable symbols and anomalies that exist. I won't point out every single moon and star symbol or icon in the show, as there are too many. If you found something I missed, please post and feel free to comment on how insane I have become.

Though the moon will be primary, the working theory I will build towards will have more to do with the stars. I will give details and my best idea of what this means, but I was unable to discover any direct explanation in the show. Is this all just overthinking small details, or was there a secret backdrop to the show that was never fully realized?

We begin with the first introduction to the moon. Along with the sun, the moon is the one of the first things we learn about the workings of the world of Equestria. It is in this foundational starting point that it is tempting to overlook the beginning of the show. After all, we have the idea firmly in our heads. Celestia controls the sun. Luna controls the moon. Nothing more to know. Well, if it were that simple, I would have given up on this thread idea.

Referring to image 2, we see Luna not only raising the moon, but moving some stars. A quick study of the actual animation will show that only a select few stars are actually moving, which are the larger ones at the top of the image, three connected ones and a shooting star. The rest of the stars fade in as the moon is raised, which is consistent with the show. All of this to say that already there are elements to the night sky that are not well known to the average viewer. But perhaps these are decorations, meaningless filler to add to the scene to give the art the correct feeling.

The third and fourth images go together as the Elements of Harmony are introduced. Upon closer inspection, the Elements are in a form that I was not able to find elsewhere in the show. They are always depicted in the form shown in image 5, unified in shape. Another interesting tidbit is that a green element is shown that is a strange placeholder which is supposed to be where the purple Generosity element is to then give way for the element of Magic, which is always depicted in the special form of Twilight's star cutiemark. Perhaps the show intended for a seventh element, but it might have been an early revision of the design. There is too little evidence to know if there was ever to be a use for a green element, as it doesn't seem to work well for any of the main pony color schemes.

Regardless, referring back to image three, the stained-glass choice for this scene is also interesting. To the left, we see what appears to be three orbs with crosses, indicating shining stars. They are positioned alongside what appears to be a moon. Underneath them is something shining through what looks like clouds. You can get a better look at this in image 4 as there is a sea present below the shining object. I assume this to be the sun, but you never know if towards the end of the show the artists might signal something completely different, revealing precisely what the object is...

Next up is the center glass and it depicts another glowing thing that has many objects orbiting it and that are orbiting other objects. It is safe to assume they are planets as there is even a ringed planet. This glowing thing appears to be the sun. I haven't seen anything contrary to this throughout the show, unlike the first window, so I think I am safe in that assumption. Image 4 is hard to make out as the Elements are positioned directly in front, but a clearer image will be provided later.

The last glass depicts what appears to be phases of the moon with four stars and a large glowing object with lines forming crosses, which tells me another star, only closer than the others. Another interesting detail is that the full moon has curves on it. It is unclear if this depicts a face, as the moon is never shown as having a face, only a mare when Nightmare Moon is trapped. It looks like a face to me, but perhaps it is meant to represent something else. I haven't figured this out. I actually just notice this as I was typing everything out.

Image five reveals one last minor detail, the Elements reside on a star-like object on a field of stars. Perhaps this was the original story of where they came from? Or perhaps this simply communicates the power they possess over the cosmos?

This is part one of many to come. I will go through each finding I have come across. Again, the primary focus I had going into this is the consistency of the moon's portrayal and will be the bulk of updates to the thread, but now I am so invested I will also post interesting things I find in tangent to this goal. Maybe at the end, we will discover a secret or two to the world that perhaps you never thought about. 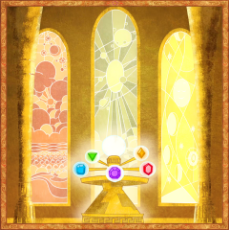 >>349052
>nderneath them is something shining through what looks like clouds. You can get a better look at this in image 4 as there is a sea present below the shining object.
I created a merge of the two images of stained glass in case it helps in the search for the meaning. 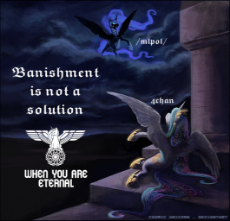 another of this weird coincidences is the size of the moon the proporion and circular orbit and the fact ot is the only thing that keeps earth functioning with tides and making the ecosystem etc to be suitable for life. and the size of the moon is also a weird one, because is too big for earth.

then also the distance makes it pefect for solar eclipses.

you should check the history of KENOS moon.

Type V. Yes, Type V might just be the next possible advancement to such a civilization. Here beings would be like gods, having the knowledge to manipulate the universe as they please....

just imagine how powerful civilization Equestrians would be if the Alicorns used their stars controlling powers to harness the energy to toher levles.

controlling the seasons is already shown in mlp fim...

i guess Celestia, Luna and the weather ponies are trying to live simple lives and not trying to go for the full potential.

Maybe a pony with an unlimited hunger for knowledge and science would be able to become an alicorn princess and control the sun mon and investigate the limits of her power to control and travel trought space moving all the solar system as a ship to know other worlds and keep going due to her long life span... oh i know a pony with that description... Twilight...

who knows wich is the limit. also MAGIC MAKES IT ALL COMPLETE... 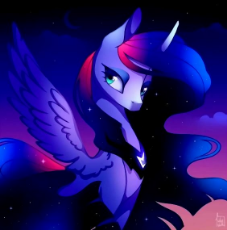 whoelse is an alicorn goddess with lot's of time to think all of this and avoid space anomalies to save Equestria form universal cosmic dangers... 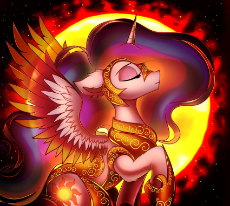 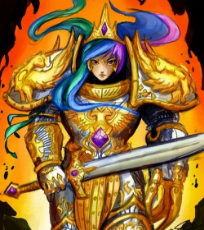 there is a thory about our earth that used to have another moon, and then there was an era without moon, then the actual moon appeared. you should check that.

i think that the first moon existed before Luna and Celestia, and maybe the new moon was the one controled by Luna.

anyways. the 4 stars next to the moon are those planets in astronomy

Now that this thread is ancient and people long forgot it existed, I suppose it is the perfect time to return to update things. I will be keeping to the stuff within the show and trying to figure out how it would operate within the universe and not by explanation of our world into this one.

Picking back up from the reveal of the Elements of Harmony where Celestia reveals her reign over sun and moon, sitting on a throne with a ringed planet. After closing the book and moving on to the intro, we get a closer look at the throne in the show, which has replaced the ringed planet with a star. It seems that like the color of the elements, the throne also has been revised. There is more wiggle room in this case as the Castle of the Two Sisters exists and this might have been the throne design from that castle and the move to Canterlot allowed for the redesign to exist. The implications if this is to be assumed is either the stars have gained an importance over the ringed planet or the ringed planet is also depicted as a certain star. Seeing that certain planets in our world have been described as planets in history does give some allowance to how the ponies might have an association of the same sort, but we need more information to confirm this is a pattern rather than a retcon.

Moving on we see some details of the structures of Canterlot. The focus on the stars here likely stems from relating magic with stars. From the decorations atop the spires of the architecture to the detailing around the towers. One specific decoration even appears to be an enlarged version of the eight-pointed star shown throughout the show. However, it is stylized as an orb with a ring around it. It is too early to connect this to the ringed planet, but it is an immediately similar asset to create to put on top of the structure. Worth keeping in mind also that what looks like the same object is missing the ring in the following shot.

To formulate a theory from this alone isn’t enough. Going through what I have been gathering will lead to strange conclusions on not just the Elements of Harmony, but possibly the nature of the sky and magic itself in Equestria. Until we get there, looking at this seems to be the most logical conclusion is a series of retcons and artwork that is meant to be pretty over functional purpose. Hopefully, I will convince you otherwise as I continue my overview of the mysteries plaguing my mind. There is much more to see and connect. I'll see you soon with more discoveries.
Anonymous
Sun, 18 Dec 2022 11:12:19 GMT
783071d
?
No.356586
356597
>>356536
Would never have noticed the planet on my own. This is really cool!
Anonymous
Sun, 18 Dec 2022 18:03:18 GMT
fde0c94
?
No.356597
>>356586
We are just getting started with the findings I have been collecting. Hopefully it continues to be interesting. I am writing up the next part now.
[Last 50 Posts] [Last 100 Posts] [Last 200 Posts]
19 replies |  18 files |  10 UUIDs |  Page 10
[Go to top] [Return] [Catalog] [Reload] [Archive] [Update] ( Auto)