>If that’s their plan, then more Republican candidates will likely need to take a pro-choice stance in order to affirm their chances at winning the midterm elections.
I don't think that would necessarily be as big a deal as popular wisdom might suggest. Abortion is one of those issues that is a huge deal for the small sliver of the population on either side that feels strongly about it, but most people are more interested in issues that directly affect them. Abortion is mostly an ideological issue: feminists are obsessed with it because muh wammen's rights, and Evangelical Christians are obsessed with it because of religious convictions. Outside of those groups, most people have a stance on it but it's not the issue that defines how they will vote. For instance I'm basically pro-life in part because the pro-life view aligns with the more conservative side of the spectrum, and in part because I hate feminists and am in favor of anything that will kick sand into their eyes. The honest to God truth is that I really don't care that much whether abortion is legal or not, because by and large it doesn't affect me and has little bearing on the things I do care about. Thus, if I liked a particular candidate's stance on all other issues, but he suddenly flipped from pro-life to pro-choice for political reasons without changing any of his other positions, it wouldn't necessarily be a deal-breaker for me. I don't have any data or statistics to back this up, it's just a gut feeling, but I suspect a significant number of other people feel the same way about it.
Anonymous
Thu, 02 Dec 2021 23:57:28 GMT
f1174d3
?
No.327538
>>327534
>>327535
But what is on the line is basically what sorts of measures people can take following unintended and health- or livelihood-threatening pregnancies. I don’t want to make this into an argument about whether abortion should be illegal or legal, but less than 30% of Americans support overturning Roe v. Wade outright, so if it gets overturned, abortion rights will become a hot-button issue in the midterm election.
Anonymous
Fri, 03 Dec 2021 02:13:02 GMT
3ab7e34
?
No.327543
File (hide): CE3CA4AD15E2A9ABBBB002C782241E77-196833.png (192.2 KB, 1259x901, Screenshot_2021-12-02_18-23-13.png)
[Bing] [wait] [Tineye] [Yandex] 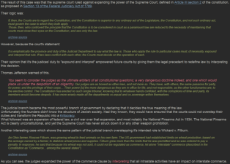 >>327480
>If they reaffirm state's rights to nullify federal overreach, that immediately ties into lockdowns, mandates, et al!
Here's what will happen.
1. The jewdiciary will make some half-assed ruling that appeases the anti-infanticide faction
2. The judges will submit massive statements which will give the future court powers in excess of what they already have by picking phrases from the court's statements to justify their decision

See: Marbury v. Madison
Anonymous
Fri, 03 Dec 2021 04:52:35 GMT
47053b3
?
No.327548
>>327480
I'll be honest, I doubt anything is going to happen. Plus, we have to wait far into next year for their decision. BUT, if something does come out of this, this is a nice first step to giving states back their rights. If you don't like it, get the fuck out of Mississippi.
Anonymous
Fri, 03 Dec 2021 07:26:15 GMT
0afa1ac
?
No.327551
>>327534
>Republican
reps are dems playing their part in the kayfabe
Anonymous
Fri, 03 Dec 2021 08:37:49 GMT
a0c2d04
?
No.327561
327580 327594
>>327535
What I can't stand is their claim that any pro-life position is wanting control over women. Sure, there are some truly regressives out there, but most just don't want infanticide damnit
Anonymous
Fri, 03 Dec 2021 12:29:57 GMT
213e09e
?
No.327580
327582 327595
>>327561
Regressive is one of many leftist slurs. The leftist wants to regress into a child and regress humanity into a tribalistic imperialistic warmongering empire of pure evil solely for the benefit of the ruling class in charge of the left, aka jewish banksters.
Maturity and freedom means wanting to be a free man with the responsibility to do good and the right to protect the good. The left is deciet and weaponized narcissism.
Anonymous
Fri, 03 Dec 2021 13:02:58 GMT
f4b584f
?
No.327582
327584
>>327580
>being this retarded
when 90% of the right isn't as you described the description you gave is about as meaningless as the dictionary definition of feminism.
Anonymous
Fri, 03 Dec 2021 16:09:30 GMT
213e09e
?
No.327584
>>327582
Left bad
Anonymous
Fri, 03 Dec 2021 18:02:31 GMT
fe793b4
?
No.327594
>>327561
Yeah, as if men who wanted to control women wanted there to be more unwanted babies any more than they did.
Anonymous
Fri, 03 Dec 2021 18:21:24 GMT
fe793b4
?
No.327595
>>327580
>Regressive
That's just progressiveism again, tbh. Progressivism is just trying to change society in a direction that you claim improves it in some logical, scientific, moral, religious or ideological grounds. There comes a question with that though: progress towards what?
A lot of political movements that revisionists like to describe as "right wing" were really progressive in their time. Eugenics was a progressive (positivist) ideology, and most strongly opposed by conservatives at the time. The Prohibition/Teperance movement is something pinned on "religious conservatives" but it was made reality by the progressive party that wanted to "advance" the country in a direction that made it more "moral", along puritan religious lines.
Positivism is a form of progressivism to, based on the concept that science and experts should make decisions in society, or that political movements should be based on science. Democrats today love to invoke those ideals, especially science worshippers who don't actually know anything about science. The issue with positivism is that while science is indeed useful and experts can help with ideology and policy, scientific communities are very easily influenced by the socioeconomic and political elite who'll use it to reaaffirm their existing biases or power structures, or just move society in whatever direction that they want while screaming "just trust the experts".
Progressivism is often associated with liberals, but it's not necessarily a liberal ideology. It's only in the past 50 years, and further back in the last 300 years, that Liberalism was considered progressive because old traditionalist views in the past and present were changing and those changes are considered to be social progress. Progressivism can be authoritarian if it means making people act a certain way, or even wear the same clothing as conservatism when it's along the lines of religious or moral absolutism, but it's not necessarily liberal. Really, the only thing that defines progressivism is whatever "the progressives" of the time say it is. Sometimes progressive ideals and policies become mainstream (women being involved in politics + voting), and sometimes they're abandoned because people don't like them anymore (Temperance + Prohibition; Eugenics; Puritanism).
[Last 50 Posts] [Last 100 Posts] [Last 200 Posts]
18 replies |  2 files |  12 UUIDs |  Page 9
[Go to top] [Return] [Catalog] [Reload] [Archive] [Update] ( Auto)