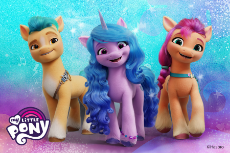 >It appears "My Little Pony," the kid-friendly animated franchise that dates back to the '80s, has gone woke. Netflix has released "My Little Pony: The Next Generation," and the 90-minute film welcomes new fantastical creatures, some of them fear-mongering, with a mission to restore the pony world of Equestria with magic.

>In an apparent effort to send a message to kids about empowerment, unity and reform, Hudgens plays the heroine of the film, an earth pony named Sunny, who teams up with a curious unicorn named Izzy (Kimiko Glenn) to attempt to make peace with outsiders from other communities. Along the way, they meet some pals and band together as a pack of young progressives wanting to make change. "I think that it really reflects the times," Hudgens said of the movie's impact in an interview with ABC 6. "My character believes in inclusion and friendship."

>"I think that it really reflects the times," Hudgens said of the movie's impact in an interview with ABC 6. "My character believes in inclusion and friendship."
Wasn't the previous show literally called "Friendship is Magic"? What a PR lib douche.
Anyway hopefully we get a more based and red commie than Stalin Glimmer. She didn't even read the basics.
Anonymous
Mon, 04 Oct 2021 22:25:33 GMT
a631638
?
No.321425
>>321268
in FiM any time they were face with a real problem they just yeeted the beem at it. its more like "tribalism is magic" because fuck opinions that are not inline with meh CelEstia uN' LuNa.
Anonymous
Mon, 04 Oct 2021 22:59:47 GMT
a104550
?
No.321427
>>321268
I'm probably preaching to the choir here but that's always pissed me off about the socialist lie.
Commies, socialists, marxists, call the jewish scum whatever you want.
For their idea of utopia (them in charge with absolute power) to seem like a utopia to others, they need to pretend a free society where everyone owns their own bodies and labour yet needs to farm food (or generate wealth somehow if they want to buy food) is the most inherently awful and oppressive thing imaginable.
But despite all their claims that a communist society will use its absolute oppressive totalitarian control to create a classless society, that's logically impossible. There will still be a class divide between the ruler, and the ruled, and the ruler's enforcers. There will also be class divides between the different classes and (if any) different branches of enforcers.
If commies really believed what they claimed to believe, they'd learn to farm, pool funds together with other commies to buy some farmland in the middle of nowhere, fuck off over to that farmland with some farming friends of theirs, and lead by example in a genuinely leaderless commune that exclusively farms to eat and has no contact or trade with the "inherently oppressive" outside world and all its "oppressive" post-industrial scientific knowledge/machinery/medical knowledge/weaponry/toys/whatever.
Even then, you could say the "leader" of a leaderless cult is whoever's will is currently being followed, whoever's able to convince the rest of the group to do as he says, think as he wants them to think, and so on.
It's all an entomological impossibility.
sage
Anonymous
Tue, 05 Oct 2021 05:21:47 GMT
ba17a46
?
No.321458
321477
File (hide): 19FDE758AC61626B9E6B20FC15C75473-61648.png (60.2 KB, 289x153, herro.png)
[Bing] [wait] [Tineye] [Yandex]

I'm gonna side with FOX on this one, or at least the headline.

The movie seems pretty tame and neutral, but that's really just because of the Overton Window shift. We're so far down the slippery slope by now that you can look back up at My Little Pony: A New Generation and think, "well that's actually not bad at all!". It's at its heart lefty revolutionary propaganda.