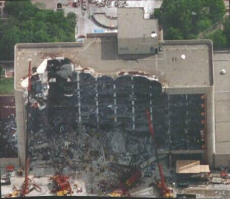 OKC bombing a false flag operation?
Anonymous
Sat, 11 Sep 2021 22:00:34 GMT
fe306e1
?
No.319448
[Last 50 Posts] [Last 100 Posts] [Last 200 Posts]
I watched A Noble Lie recently and decided to do my own research on the subject, I've been in the middle of it being a part of a larger domestic Operation Gladio or a legitimate terror attack for a lot of reasons.
But let's get into it:
Police who arrived on scene reported two large unexploded bombs in the rubble of the federal building https://www.youtube.com/watch?v=Q3u_Bgj30-E
The bomb allegedly used to destroy the building was a fertilizer/oil bomb, it would have not been able to destroy column B3 (which was made out of reinforced steel) but it did anyway. https://www.youtube.com/watch?v=rCYIn8QzRjI
Seismographs of the local area picked up more than one explosion https://archive.is/MVIO7
Police sergeant Terrence Yeakey was the first officer on the scene of the attack, he was later found brutally murdered (but claimed to be suicide) after claiming that the official story of the attack was a lie https://archive.is/ZAhaM
Jesse Trentadue stated that he was given 26 pieces of CCTV footage capturing the attack, all of which had the part where the ryder truck approached the building cut out, then the FBI said that they "did not" have the original tapes showing the ryder truck http://www.radio4all.net/files/[email protected]/4212-1-OKC_2017_replaymp3.mp3 https://archive.is/vMnTr

So, what do you guys think, feel free to discuss "terror" attacks you believe might be false flag operations too.

As for the OKC operation, a possible front was a meat packing plant run by a guy from the Iran Contra affair and staffed by Arabs. One of the employees happened to accidentally misroute Mohammed Atta's luggage on 9/11 so that the feds could get into it.

This is all fourthhand from conspiracy sites that I read ten years ago and I can't find again in a quick search.
Anonymous
Sun, 12 Sep 2021 02:09:49 GMT
fe306e1
?
No.319462
>>319457
There used to be dozens of videos from people stating there were numerous shooters, but JewTube scrubbed them from the platform and we'll likely never see them again.
Anonymous
Sun, 12 Sep 2021 02:43:59 GMT
6715e73
?
No.319468
319469
>>319457
Audio analysis shows that there were multiple shooters.
Fuel tanks were shot at.
https://www.youtube.com/watch?v=YWk10GvIc5Q
Anonymous
Sun, 12 Sep 2021 04:08:08 GMT
fe306e1
?
No.319469
>>319468
I'm surprised that survived, but I do have a dead link to a now deleted video that was about a half an hour of survivors going on video and saying that there were numerous shooters. It was archived on the waybackmachine but all of those were scrubbed too, I'm still pissed.
Anonymous
Sun, 12 Sep 2021 11:12:53 GMT
ff2e649
?
No.319480
Those youtube-downloader programs on Github are great for making backups of this stuff while it's up
Anonymous
Sun, 12 Sep 2021 13:24:21 GMT
fe306e1
?
No.319482
319504
Might as well dump more info here, a risky one to tackle but I'll do it anyway; Christchurch - I know it's like an icon but people believe that it was a MOSSAD op, lemme explain why. In 2011 an earthquake in Christchurch exposed a MOSSAD spying ring that was collecting data from the NZ government, why would MOSSAD be in Christchurch, let alone NZ? https://archive.is/ws0FB
The NZ police were conducting paramilitary training on the SAME DAY as the shootings, so it's incredibly odd that the NZ police were completely prepared for one of the only mass shootings in their entire history. https://archive.is/lAO7O https://archive.is/D77N8
In 2018 students from the Parkland school shooting held an anti-gun rally in Christchurch https://archive.is/8peaQ
In 2018 Brenton Tarrant was confirmed to have visited Pakistan and said that ti was; "An Incredible Place Filled With The Most Earnest, Kind-Hearted And Hospitable People In The World" https://archive.is/nVkdw
And just a few days PRIOR to the shootings happening John Podesta visited NZ to talk about the potential cyber security threat from Russia and Chinese cyber attacks https://archive.is/FTgJe

There's probably more than that, but that's all I was able to find. Do I believe it was staged or a MOSSAD op? Not really, but it's easy to see why people believe this shit - and we all know that Jews love to kick up shit in foreign countries to cause chaos and distrust in the population.
Anonymous
Sun, 12 Sep 2021 20:57:07 GMT
ff2e649
?
No.319504
319516
>>319482
Do you still have videos of Christchurch? I hear some of the "corpses" spontaneously lost/gained socks mid-shooting, everyone hit the deck and stayed there before he started fighting, and nobody fled the building when he left to get more ammo.
Anonymous
Sun, 12 Sep 2021 22:03:27 GMT
fe306e1
?
No.319516
>>319504
I have the video saved, along with the manifesto. I snagged it before it got scrubbed from kikebook
Anonymous
Mon, 13 Sep 2021 01:23:58 GMT
fe306e1
?
No.319527
319528
Another OKC bombing info dump from an old site I found (now defunct, but still relevant) link here https://web.archive.org/web/20130920105631/http://okcbombingtruth.com/
Timothy McVeigh is supposed to be the only one who drove the Ryder truck full of explosives up to the Murrah building and detonated it. But the government only produced one witness during McVeigh’s trial to place him in Oklahoma City. That witness, Daina Bradley, lost her children, her mother and her leg in the bombing. Under cross-examination, she admitted that she saw McVeigh with another man, the fabled John Doe #2, in the Ryder truck. Numerous other witnesses state that they saw McVeigh with other perpetrators the day of the bombing. There are also numerous other witness accounts of McVeigh accompanied by other men during his preparation for the bombing and even when he rented the Ryder truck. In some cases, these suspects have been identified by witnesses and yet the government claims that McVeigh was the sole actor in the tragedy of April 19, 1995. https://web.archive.org/web/20130920105631/http://okcbombingtruth.com/docs/DainaBradlyFBI302.pdf
https://web.archive.org/web/20130920105631/http://okcbombingtruth.com/docs/MorozFBI302.pdf
https://web.archive.org/web/20130901094332/http://okcbombingtruth.com/docs/SalyersFBI302.pdf

Paramedic Tiffany Bible, who was on the scene within five minutes, has stated in an affidavit that agents of the Bureau of Alcohol, Tobacco and Firearms (ATF) told her that they were not in their office that morning. EMT Katherine Mallet also overheard one ATF agent say to another, “Is that why we got the page not to come in today?” Bruce Shaw, as interviewed on KFOR-TV, was also told by ATF agents that they had been paged not to come in to work. ATF agents initially denied these claims and now variously claim that one of their agents was in a free-falling elevator (this has been disproved), or that they had been on an all-night stakeout or that they had been at a golf tournament. As they try to sort out their lies, all we want to know is: did the ATF receive a warning, and if so, why did they not pass it on to others in the Murrah building?
https://web.archive.org/web/20130920105631/http://okcbombingtruth.com/docs/BibleAFF.pdf
https://web.archive.org/web/20131030012702/http://okcbombingtruth.com/docs/SteeleAFF.pdf

Several survivors vividly recall that the Murrah building began to tremble and pitch before the truck bomb blew off the façade of the building. Jane Graham of HUD felt an earthquake sensation and felt the building pitch back and forth. A warning was yelled out to get under the desks, which saved the lives of Graham and everyone else in the room when everything collapsed 8-10 seconds after the initial tremors. Jack Gobin of the Dept. of Agriculture also felt an earthquake sensation and got under his desk before the collapse. Michael Hinton, a federal agent, was on a bus several blocks away when two separate blast waves nearly tilted the bus over. Given that the blast wave of an ANFO bomb travels at 1,100 feet per second, it is inconceivable that one event could be responsible for the 10 second gap between the episodes. The seismograph at the University of Oklahoma also records two separate episodes, 10 seconds apart.
https://web.archive.org/web/20130920105631/http://okcbombingtruth.com/docs/FinalReportPG172.pdf
https://web.archive.org/web/20131030003033/http://okcbombingtruth.com/docs/Seisom.pdf

ATF informant Carol Howe had infiltrated Elohim City, a white separatist community in eastern Oklahoma, in the months before the bombing. She reported to her handlers that extremists were plotting to bomb federal buildings and assassinate government officials and that they were making reconnaissance trips to OKC. She has named Andreas Strassmeier, Michael Brescia, Dennis Mahon and Peter and Tony Ward as probable accomplices to Tim McVeigh. It should be noted that McVeigh placed a phone call to Andreas Strassmeier at Elohim City shortly before the bombing. Her testimony was ruled inadmissible and an ABC 20/20 special on her story was cancelled following a call made to ABC by the Dept. of Justice, according to the show’s producer. Furthermore another informant, Cary Gagan, was granted a letter of immunity by the Dept. of Justice for his work in reporting on a terrorist group that was plotting to destroy the Alfred P. Murrah Building. He warned his handlers that he had been delivering explosives for this group and that he had been sent on scouting missions to the Murrah building.
https://web.archive.org/web/20131029235608/http://okcbombingtruth.com/docs/howetrialtranscript.pdf
https://web.archive.org/web/20130920105631/http://okcbombingtruth.com/docs/CaryGagan.pdf

A U.S. Army nurse reported to the Oklahoma Bombing Investigation Committee that a call was placed to her office at Walter Reed Army Hospital three or four days before the bombing. The “Pentagon… or congressional liaison to the Governor of Oklahoma’s office” requested information on the “triage for victims of blast overpressure.” The nurse’s supervisor corroborates this statement. This was followed up by a second phone call to a Colonel in the office who has refused to release the notes of the conversation. The colonel was never subpoenaed nor were the phone records for the governor’s office. Just what was this liaison to the state government preparing for?
https://web.archive.org/web/20130920105631/http://okcbombingtruth.com/docs/WalterReed.pdf

Randall Yount met an acquaintance of his at the bombing scene who was a member of the OK Co. Bomb Squad. This man told Yount, “Yeah, we’ve been down here since early this morning looking. We got word there was going to be a bomb, and we thought it was going to be at the courthouse. We went over and couldn’t find anything.” Renee Cooper, Attorney Dan Adomitis, J.D. Reed with the Ok. Co. Assessor’s Office, Norma Joslin of the Ok. Co. Board of Elections and private investigator Claude Criss all report seeing the bomb squad at the federal courthouse that morning, before the bombing.
https://web.archive.org/web/20130920105631/http://okcbombingtruth.com/docs/BombSquad.pdf

According to Stephen Jones, McVeigh's attorney, State Medical Examiner Vernon Jordan has stated, “We have eight people with traumatically amputated left legs, and we have nine left legs.” Dr. Jordan also added that the chances that someone was buried with two right legs to be zero. Chief Pathologist for Northern Ireland T.K. Marshall had performed autopsies on 2,500 bombing victims in his time and has stated, “There is never an unknown victim.” One must assume that this leg belonged to a perpetrator close enough to the bomb for his body to be “disrupted” to such an extent, leaving only a leg behind. So who was this person?
https://archive.is/88Cp

There were dozens of video surveillance cameras that recorded what was going on the morning of the bombing, yet almost none of these have been released and none show what transpired with the Ryder truck at the Murrah building. Most recently, the government has claimed that all the cameras pointed at the Murrah building, in many different buildings and maintained by different offices and businesses, were having their tapes changed at the same time, 9:02 a.m. This is ludicrous, and insulting to the memory of those who perished in the bombing. What do they have to hide?
https://web.archive.org/web/20131102135440/http://www.huffingtonpost.com/2009/09/27/oklahoma-city-bombing-tap_n_301293.html
Anonymous
Mon, 13 Sep 2021 01:33:19 GMT
fe306e1
?
No.319529
>>319528
Part 3 (from additional sources)
Strassmeir still mystery man in Oklahoma City bombing:
"A retired, senior officer of the nation’s intelligence community has confirmed to this newspaper that the German military-intelligence operative, Andreas Strassmeir, was in fact “working for the German government and the FBI” while residing at the neo-Nazi compound known as Elohim City. Strassmeir resided at this compound for four years and closely associated with members of the neo-Nazi group that planned and conducted the bombing of the Alfred P. Murrah Building in downtown Oklahoma City.

This intelligence officer identified a specific document, a post-bombing report, that listed Strassmeir’s role as an agent reporting on neo-Nazi activities as part of a campaign being waged by both German and American governments against such activities."
https://web.archive.org/web/20150515194433/http://www.911truth.org/strassmeir-still-mystery-man-in-oklahoma-city-bombing/ 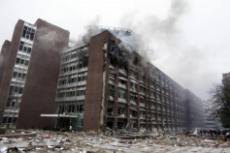 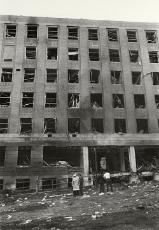