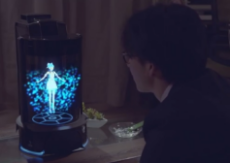 One disturbing possibility could be that this is used to create clone soldiers who could be easily indoctrinated from birth to serve the elites.
Anonymous
Sat, 18 Nov 2017 12:54:43 GMT
No.786
787
>>779
but women have rebelled against their roles as mothers, companions, and in sex. This alone doesn't replace women but this on top of the japanese Gatebox system, and the Lumii dolls brothel in Barcelona paints a picture of women being replaced with the further advancement of existing technology and the advent of sufficiently advanced AI
Anonymous
Mon, 20 Nov 2017 08:04:20 GMT
No.787
>>786
I, for one, welcome our new AI/robotic waifus and breeding companions!
Anonymous
Mon, 20 Nov 2017 19:49:29 GMT
No.789
790
>>776
Anti-thot culture makes me legitimately happy. Even in the furthest reaches of human society, the sheer scale of degenerate sluttery is reaching an all-time high and mankind is realizing it'll only get worse unless something is done to shame the sluts who refuse to control their vaginas. It's gotten to the point where socialists are now trying to turn "I'm in thot patrol! Begone thot!" into a substanceless joke. And they're just advertising anti-thot culture more.
Anonymous
Mon, 20 Nov 2017 20:49:39 GMT
No.790
>>789
https://youtu.be/CEcUkhxTzI4
it's because they don't understand memetics making something into a joke doesn't make it go away, an idea being funny is it's strength not it's weakness
[Last 50 Posts] [Last 100 Posts] [Last 200 Posts]
15 replies |  3 files |  11 UUIDs |  Page 7
[Go to top] [Return] [Catalog] [Reload] [Archive] [Update] ( Auto)