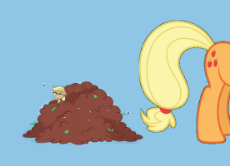 Please post anything related to gardening, meat production, or production of alternative foods.

I've been stuck in an apartment for 5 years and it's going to still take me a while to move out to a house with land. In the meantime I've been getting sick of the poison that is industrialized food. In the spirit of health and independence, I've been attempting to learn as much as possible about growing plants as I can, despite being locked inside with no land to farm.

There's two schools of thought on this: guerilla gardening and indoor farming. Guerilla gardening is when you find unused land outside and plant stuff on it. A lot of people used to do this in medians in cities or in unused grass lots. I tried this half-heartedly this year but didn't really do it right, so I don't have much to show for it.

The other path is indoor farming. With the advent of (relatively) cheap grow lights, I've seen a lot of farmers start seedlings indoors weeks to a month before moving them outside. I've also seen companies do vertical farms in warehouses using massive arrays of grow lights and shelves. With those operations, they go from seed to harvest completely indoors. It costs more than farming on land outside of course, but it's a way to produce things in a smaller indoor space when the land isn't available. The other huge advantage is the ability to grow plants year-round, meaning that I can have many failure cycles to learn from within a shorter time span. All this inspired me to try to grow some basic food crops indoors as a way to learn through failures before I even get out on land.

I bought one of these grow lights to begin the tests:
https://www.amazon.com/Lights-Spectrum-Indoor-Succulents-Seedling/dp/B07FKF6BT4/

Starting out I tried radishes and spinach. Both of them I didn't water right and so the seeds didn't hatch, or the seedlings died soon. After a couple tries, I got both to grow to seedlings, but left them in the seed flats for the rest of their life (a few are still alive). This was retarded and stunted them of course but I knew zero before attempting all this.

In the meantime, I've been experimenting with different LED grow lights and trying to see which of the cheap options works reasonably well. Nothing conclusive yet because I still struggle to keep a consistent growth cycle (water, temperature in the apartment, airflow, etc.). Also, I hooked up a raspberry pi to a power strip relay and have the lights on an automated schedule now, which is making my tests much more regular.

After several different attempts at spinach, I keep getting them to sprout but they seem to bolt immediately (bolting means going to seed, and the leaves aren't as edible once that starts). For the life of me I cannot get the spinach to produce nice big leaves. From what I was reading, spinach is actually a spring crop which tanks the cold weather and waits till the first sign of longer daylight and warmer temperatures so it can bolt. It seems like I'll need to lower the amount of light hours I'm providing it.

The radishes have had a poor go of it. However, this is mostly my fault in the container management. The seed flats were too tiny for them, and the 5-gallon bucket setup I tried next was a fluke. Whatever soil I put into that bucket seems to drain all its water straight through without absorbing anything, and the excess water was sitting under it for weeks and rotted. This killed off the latest batch of radishes before they really had a shot to mature. I'm going to have to remake the bucket with better potting soil this time.

At the same time, I grew several hot pepper seedlings in the seed flats alongside the radishes. They were stunted for a month, until I transplanted them into their own 5-gallon buckets. With these buckets, I planted one or a couple pepper plants evenly spaced out. Then, all around the peppers, I planted spinach in one bucket and carrots in the other bucket. The spinach borked again, but the peppers and the carrots are looking so green and full-leaved that it's getting exciting. I'm even seeing some flowers starting on one of the pepper plants! These have been a few months in the making at this point.

I'll pose some pictures of the pepper buckets in the following posts. These crops are set 1/3 of my indoor farming focus right now.