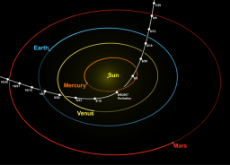 Oumuamua interstellar space object - alien light sail?
Anonymous
Mon, 05 Nov 2018 10:33:14 GMT
hPuy5
?
No.67415
[Last 50 Posts] [Last 100 Posts] [Last 200 Posts]
>As the first known object of its type, ʻOumuamua presented a unique case for the International Astronomical Union, which assigns designations for astronomical objects. Originally classified as comet C/2017 U1, it was later reclassified as asteroid A/2017 U1, due to the absence of a coma. Once it was unambiguously identified as coming from outside the Solar System, a new designation was created: I, for Interstellar object. ʻOumuamua, as the first object so identified, was designated 1I, with rules on the eligibility of objects for I-numbers, and the names to be assigned to these interstellar objects, yet to be codified. The object may be referred to as 1I; 1I/2017 U1; 1I/ʻOumuamua; or 1I/2017 U1 (ʻOumuamua).[3]

>The name comes from Hawaiian ʻoumuamua, meaning 'scout'[22] (from ʻou, meaning 'reach out for', and mua, reduplicated for emphasis​, meaning 'first, in advance of'[3]), and reflects the way this object is like a scout or messenger sent from the distant past to reach out to humanity. It roughly translates to "first distant messenger".
...
https://en.wikipedia.org/wiki/%CA%BBOumuamua

>COULD SOLAR RADIATION PRESSURE EXPLAIN ‘OUMUAMUA’S PECULIAR ACCELERATION?
>SHMUEL BIALY AND ABRAHAM LOEB
>Harvard Smithsonian Center for Astrophysics, 60 Garden st., Cambridge, MA, 02138
>Draft version November 1, 2018
>Considering an artificial origin, one possibility is that ‘Oumuamua is a lightsail, floating in interstellar space as a debris from an advanced technological equipment (Loeb 2018). Lightsails with similar dimensions have been designed and constructed by our own civilization, including the IKAROS project and the Starshot Initiative2. The lightsail technology might be abundantly used for transportation of cargos between planets (Guillochon & Loeb 2015) or between stars (Lingam & Loeb 2017). In the former case, dynamical ejection from a planetary System could result in space debris of equipment that is not operational any more3 (Loeb 2018), and is floating at the characteristic speed of stars relative to each other in the Solar neighborhood. This would account for the various anomalies of ‘Oumuamua, such as the unusual geometry inferred from its lightcurve (Meech et al. 2017; Fraser et al. 2018; Drahus et al. 2018; Belton et al. 2018), its low thermal emission, suggesting high reflectivity (Trilling et al. 2018), and its deviation from a Keplerian orbit (Micheli et al. 2018) without any sign of a cometary tail (Meech et al. 2017; Knight et al. 2017; Jewitt et al. 2017; Ye et al. 2017; Fitzsimmons et al. 2017) or spin-up torques (Rafikov 2018). Although ‘Oumuamua has a red surface color, similar to organic-rich surfaces of Solar-System comets and D-type asteroids (Meech et al. 2017), this does not contradict the artificial scenario, since irrespective of the object’s composition, as it travels through the ISM its surface will be covered by a layer of interstellar dust, which is itself composed of organic-rich materials (Draine 2003).
https://arxiv.org/pdf/1810.11490.pdf