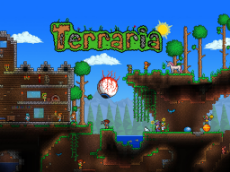 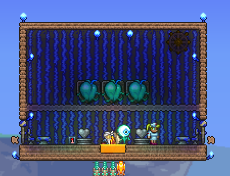 I started up a game of Terraria with a friend and my brother a little over a month ago. It's my only regular gaming time during the week for some reason.

I got Terraria shortly after it launched, but I haven't fully beaten the game and done absolutely everything in a long, long time.

I like how they're incentivising building different NPC villages, but I don't think I like the potion cooldown system they added. It makes most healing potions seem pretty worthless, and almost mandates using ironskin potions and regen potions when exploring new areas you're having trouble surviving in.

>>145231
Sometimes I come back to this game but it's not as fun playing it as I used to like to do, if I do I'll usually make a new character and a fresh world, never enjoyed the mods but vanilla was alright enough. It's a pain in the ass looking for every pet or making every armor type in the game, it's easy to put hours into this game and especially when in the caves.
>I think it'd be neat to have some screenshots of your NPC housing.
Be creative and use your imagination for fun. Out of convenience, I make skyscrapers full of NPCs like a multi story hotel, it's fairly efficient.
>pic related
Some images to validate myself.
[Last 50 Posts] [Last 100 Posts] [Last 200 Posts]
15 replies |  7 files |  13 UUIDs |  Page 7
[Go to top] [Return] [Catalog] [Reload] [Archive] [Update] ( Auto)