The tl;dr is that MLPFiM contains many elements of Masonic esoterism, based on Kabbalah, Egyptian sacred geometry, and Greek Pythagorean cult geometry.

I'm not talking about just the pyramid eye or isolated religious symbols (both of which ARE found in the show, funnily enough). I mean a deep connection which leaves me no doubt that the writers intended to connect these concepts. If I hadn't been studying these topics separately from MLP, I wouldn't be so confident. However, when you look into the sacred geometry of the Masons and their near-worship of Egyptian and Greek cult geometry and mysticism, the same concepts appear very clearly in MLPFiM.

For example: the Elements of Harmony appear directly in the Pythagorean mystical geometry cult of ancient Greece, and even in similar crystalline form! Masons referenced this cult's work constantly when building parts of major cities such as Washington DC and Paris (more of a rebuilding in Paris' case), and when building various religious structures and Masonic temples around the world.

Furthermore, Twilight Sparkle's cutie mark is a fascinating study, with close links to the Merkabah (3D analogue of the Star of David, considered a primary energy structure in Egyptian and Greek cult geometry).

The link I posted at the beginning discusses these two topics and many others; and this was only in the first two seasons! In addition, interviews with the creators have revealed that they are explicitly encouraged to work mythology into MLPFiM. Between this knowledge and the overwhelmingly clear correlation with the esoteric research I've done, I am convinced that esoterism has played a key role in developing the world of MLPFiM. I am working through the series now and will be keeping an eye out for further connections.

If anyone has more information on this subject, please share.

Anonymous
Thu, 22 Jun 2017 01:44:48 GMT
5iaep
?
No.321
>>319
Neat
Anonymous
Fri, 13 Oct 2017 15:29:40 GMT
ih6K5
?
No.6801
11475
>>319
With a name like Faust, there's no doubt that there is deliberate and calculated metaphysical subtext in MLP. How did I NOT notice this thread? The very elements themselves which were described as something like iirc the essential aspects of the feminine principle. This is very carefully worded so as not to scare anybody, but what this means is "The Divine Feminine", aka "The Luciferian Principle", which organizations such as Masonry, as well as more classical traditions such as Hermeticism, Tarot, etc. ad nauseum.
Basically, if the Church thinks its "witchcraft", it probably relates to or is centered around the divine feminine.
What MLP has done is taken what is commonly denounced as the 7 Deadly Sins and re-branded/formed it properly and adequately as the elements of harmony. What the Church (I'm talking Abrahamic, so all 3 major) has done is take the 7 aspects of creative development and made them "sins". On the one hand, all 7 CAN be abused (and would in that case be 'sinful') but Greed - as one example - is the impulse that drives one to procreate and to gainfully produce for their family. All 7 of the 'sins' have generative/degenerative expressions and are essential toward developing personal Authority, and Lucifer - AKA Venus the Morning Star - teaches men and women how to be effective creators (Authority being derived of the word Author) in their own experience.
Now why would the Church want to keep people from creating, thus developing and refining themselves body, mind, and spirit?
Realize that the capacity to create is the divine element that resides WITHIN.
Anonymous
Fri, 13 Oct 2017 15:32:34 GMT
ih6K5
?
No.6802
Tl:dr In the same sense that the kikes destroyed the reputation and truth surrounding the Nazis, the Church destroyed the reputation and truth surrounding the Divine Feminine. Its still there hidden, but its encoded.
Anonymous
Thu, 26 Oct 2017 04:57:04 GMT
BhcE4
?
No.11475
11731
File (hide): DC02B2D995339DBD8641888D2705D151-285529.png (278.8 KB, 500x480, 1501728341270.png)
[Bing] [wait] [Tineye] [Yandex] 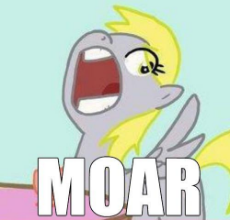 >>6801
Please elaborate on the 7 aspects and how they're branded as good in MLP
Anonymous
Fri, 27 Oct 2017 11:35:30 GMT
lGzti
?
No.11731
11916
>>11475
Applejack shows pride in her family and her work. Rarity is all vanity. Pinkie Pie is a glutton. In MLP, things things otherwise termed sins are given positive expression.
Please note positive meaning a position, not "happy".
Btw, Celestia is sloth.
Anonymous
Sat, 28 Oct 2017 01:05:39 GMT
rseA+
?
No.11916
12140
>>11731
Could you analyze this more in-depth, covering each aspect please?
Anonymous
Sat, 28 Oct 2017 14:13:12 GMT
lGzti
?
No.12140
>>11916
All of the sins are 'classically' branded so as to minimize or infringe on their basic meanings which are natural and healthy drives and aspects of simply being. Yes they can be abused - all things can be abused - but they can also be quite harmoniously applied and kept in check by discipline and experience.
Greed equates to ambition, from which an individual both develops themselves and their situation, as well as builds a family from.
Pride equates to self esteem, the satisfaction from accomplishment, and the application of aesthetics (Jordan Peterson: clean your damn room).
Gluttony is the pursuit of nutrition and sustenance, the excessive consumption of which is what keeps people alive during deficit and famine. That 'actual ideal body' pic in /ub/ hints at this.
Lust equates to both sexuality and sensuality, both of which are healthy and necessary aspects of an inter-personal relationship as well as the means to actually conceive children.
Wrath is the righteous expression one applies against threats to house and family. Its the "Momma Bear" drive.
Sloth is the natural recuperative and regenerative drive be it sleeping, resting from exertion or post injury/illness.
Envy is the competitive drive, from which rivalries are born. Having an opponent, challenging them and doing one's best leads to a greater manifestation of the self.
All of the Mane 6 liberally and regularly display these sins with abandon and a lack guilt. In some cases, the display of these are part of their inherent personality and shapes the pony that they are. Where would Rarity be without her pride? Or Rainbow Dash? Twilight (early on) would rather read her books than engage in intimacy (Lust), and now she's the Princess of Friendship. Fluttershy is greedy for the affection and acceptance of animals. Oh, and watch the season 2 finale and tell me there's no wrath.
[Last 50 Posts] [Last 100 Posts] [Last 200 Posts]
7 replies |  2 files |  5 UUIDs |  Page 33
[Go to top] [Return] [Catalog] [Reload] [Archive] [Update] ( Auto)