100 players armed with only their fists parachute onto an island and have to scavenge weapons and equipment. Last player/team standing wins. An ever shrinking perimeter circle slowly herds the players into close quarters. Anyone who leaves the perimeter takes damage over time. 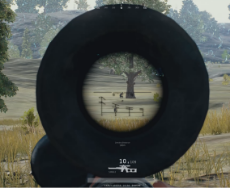 >>240
It is still in early access. They still have some work to do to improve the netcode. They're supposed to be adding vaulting and climbing soon, which will open up additional movement options near walls and windows.

They're also working on a few alternate maps. I think a and a snow map.

I've been having fun playing it with friends. We haven't won a match yet, but we've come in second and third place a few times. Usually we make it into the top 20.

I've started taking to hoarding smoke grenades so that I can throw out some concealment in the late game if the blue wall contracts in such a way that forces us to cross no-man's land.

The VSS is probably my favorite weapon because of how quiet it is. Engaging with most firearms generally draws fire from 2-3 other squads. But the VSS can barely be heard beyond 30 meters and its subsonic rounds don't warn the enemy about near-misses. The damage is criminally low, but the rangefinder is properly calibrated so you can at least reliably score headshots against stationary targets to make up for that downside.

When solo, you can get the drop on someone, end the fight, loot, and gtfo.