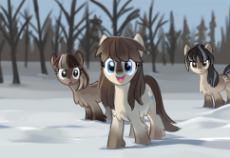 "Mustard! Mustard! There's a filly here asking for you. She says her name is Amber."

There seems to be a reply of "Coming mom," but really precisely what is spoken is hard to discern. Amber is waiting outside for quite a number of seconds.

"He's coming" she turns and answers to Amber, and there is a still longer delay. After perhaps as long as a minute in total, Amber sees the yellow form of Mustard trim exit out beside his mother, wearing a brown, presumably leather jacket that Amber could be forgiven for thinking was made of burlap, and with a smile and exited demeanor expressing genuine pleasant surprise at Amber's presence. 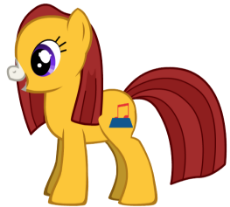 He comes back outside. If he grabbed anything, it must be in his jacket pocket.

“I’m ready” he says, walking next to Amber, and looking out past her onto the street, before again turning to her.

He replies to Amber:
“Huh… I’ve heard of the Williams society, but I don’t know where their location is. I’ve been around here a while, but not that long… I think it will be fun to try.”

But Amber sees the two story brick and concrete building in front of her:

"I'll cover you on something later" He says

She goes down the hall with Mustard, looking at the concessions and asking if he wants any food.
Anonymous
Sat, 02 Oct 2021 05:09:01 GMT
c77989a
?
No.152352
152353
>>152349
One colt is seen working at the concessions stand. It has Corn on the cob, hayburgers, and some other food items at approximately average prices. There is a set of stairs going upwards shortly before the concession stand, and a few rooms that branch off. But the hallway does indeed end in a wide open room. It must be as wide as the building as a whole, and the ceiling spans all the way up to the top of the second floor, with rectangular windows letting in natural sunlight, and a white wall with a couple small interior windows on the second floor of the wall on the side from which Amber enters the room. It seems to take up the entire corner of the building. There are two pools, actually. One is a very large rectangular pool with black stripes inside and multiple diving boards. This appears to be a six lane, "short-course" pool that is fairly deep at all points. There is actually a second pool, one that is slightly smaller, with a gradient of depth and a large shallow section. There are a number of ponies (and one zebra family) swimming in or occupying chairs around the pools. Some ponies perform laps, or dive in the larger pool, while a few mares and foals wade in the shallower pool, sometimes using floats.

While both pools are indeed incased by cement, they are at least recessed into the ground, although this building, like most larger buildings, is raised slightly above ground level and has external steps to get in. 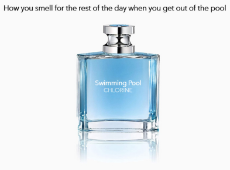 No running, no glass, and no diving in the shallower half of the shallower pool. Not responsible for loss of belongings. Lifeguard on duty.
Amber Sunset
Sat, 02 Oct 2021 06:02:15 GMT
8cd3caf
?
No.152357
152358
>>152356
It's customary in a lot of pools to shower first. I'd imagine it to be more common among species that don't wear shoes.
She takes off her clothes and belongings and puts them in a locker or whichever corner seems most secure, then takes a cold shower to rinse off the mud from her hooves. After that, she goes to the shallow pool and sticks her foreleg in, as if to test the water.
Anonymous
Sat, 02 Oct 2021 06:06:49 GMT
c77989a
?
No.152358
152359
>>152357
I'll admit I've never seen that. If you didn't urinate, you were doing good
There are two showers relatively near the entrance, and both lockers and chairs. Mustard Trim follows Amber.

Silver smiles at the two, before looking at Mala.

He scratches his chin.

"So, I told you about plans for today, yes?"
Anonymous
Sun, 03 Oct 2021 18:52:07 GMT
c77989a
?
No.152394
152395 152420
>>152388
Amber slowly wades in the ~three and a half feet or so of water. There's a few smaller foals there. Perhaps the most notable set of foals is one, two, three, four zebra foals with a zebra mare. While two of the foals are older males who stay in the vicinity of their mother (or caretaker; who knows), two zebra fillies prance around the pool, prompting the mother to yell "Don't run along the edge now. It's slippery. You'll fall right in. You'll fall right in and I'm not coming to get you. Mhmmm." This is far from the first time Amber's seen zebras, and it's not even the closest she's been to one in the past three days. But it is perhaps the first time she's had the time to appreciate the subtle details of zebras, and how they differ from ponies, like the fleshy leonine tails, or the barrels that extend just a little further down and are a bit straighter near the spine. Or the slightly narrower, longer black muzzles. Or the almost repetitive combinations of grey, black, and white coats, differing from one another mostly in the pattern of the stripes. One of the older zebra colts wades into the water in the shallower section.

Two other "family" units can be seen. One is of an older mare - much older, coming along with two earth pony colts. One eats a red snow cone, while the other moves around to dive into the shallow pool. No water splashes onto Amber, but she's not far away from the scene either. Elsewhere, a mare lays on a chair, and a foal goes up next to her, evidently her own. Several more, perhaps three, foals roam free range in the pool area. One runs around the pool looking into the water at a second, while a third simply floats freely.

Adolescents are greater in number. A small herd of young mares, four in total, congregate by the edge of the shallow pool, with one stallion attempting to insert himself (unsuccessfully) into this group. One stallion and mare, it sort of looks like a couple, prepare to dive into the bigger pool. Inside the bigger pool, two adolescent stallions take laps, as does a third younger colt, though the colt surely proves himself to be an adept swimmer.

There are three adult stallions outside of the bigger pool. One exceptionally fat one with goggles and a swimsuit prepares to dive in, one red stallion with black mane gets out of the pool, and a third cloud grey pegasus jumps off the diving board, uses his wings to fly up a few more feet, does a flip, and then dives into the water, continuing to swim along one of the lanes. Another adult mare takes a sip of a drink, and watches the scene.

Mustard Trim has moved a little further along in the pool. His body below his neck is now fully submerged, and his dark brown tail floats and spread outwards in the water, as do a few of his short, mustard colored coat hairs. He swims in the water with all four legs, and makes a circular pattern around Amber, with himself to the right of Amber perhaps five or six feet away, and on the side opposite from the zebra family. His head and eyes are turned towards Amber, whom he wordlessly gazes at.