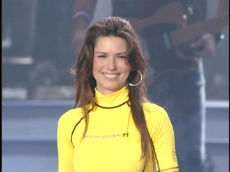 Ka Ching
Anonymous
Fri, 31 Jul 2020 01:33:50 GMT
b930ba4
?
No.132612
132613 132614 132618
[Last 50 Posts] [Last 100 Posts] [Last 200 Posts]
I'm not exactly into the paranormal or anything esoteric and I know music videos are loaded with esoteric symbolism. however this music video is interesting.
Shania Twain is a Canadian country/pop from the mid 90's early 2000s and was fairly popular, especially around the time this song came out.
Ka-Ching is basically a song mocking consumerism, however what I find funny about it is, it was never released in America and there were 3 versions of the video released.

so she takes a massive hit at ZOG and her cult. American never gets the single for obvious reasons and the EU video cuts out the not so obvious le happy merchant and Rothschild stuff but keeps the red dress version because by itself without the other parts seems innocent enough and her swipe at the cult probably doesn't mean much outside the US.
[Last 50 Posts] [Last 100 Posts] [Last 200 Posts]
6 replies |  3 files |  4 UUIDs |  Page 13
[Go to top] [Return] [Catalog] [Reload] [Archive] [Update] ( Auto)