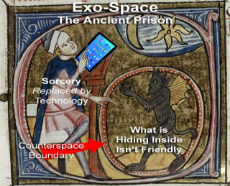 >There exists another "spectrum" that is the negative of the conventional, Newtonian spectrum (RGB). A great deal of effort was put in my the Royal Societies of Britain to keep this spectrum hidden from science and the public and known only to the practitioners of dark magick. This "occulted spectrum" is based on BLACK PHOTONS--not shadows, but a form of light that is actually BLACK. (Ever wonder why all those evil sorcerer's mirrors are made of black obsidian, rather than white silver??)

>While researching this occulted spectrum, which runs from infra-yellow to ultra-cyan, a hidden domain was revealed--the realm of Exo-space (E-space, from Dr. Who) that coexists with our conventional space but remains completely invisible to normal observation. Exo-space is not a "linear" space as our conventional understanding is, but is based on angular velocity (turns and shifts)--in essence, it FOLDS BACK upon itself, making a type of "pocket universe."

>When the ANNUNA (mostly reptillians & other alien invading forces) lost the war against the L-Ms (Lemurians and other nonhuman sentient Earth natives), some 800 years ago, a power void was left between mankind and the ancient gods, being filled by the Archons (Greek daemons). A decision was made that these creatures should not be allowed to run free with man, as they had been doing for centuries before, so this dark realm of exo-space had a new use: a natural prison for these demons... called the "darksome atmosphere" in ancient, magical texts.

>St Thomas of Aquinas documents what happened, way back in the 13th century: "The darksome atmosphere is as a prison to the demons until the judgment day. They carry fire of hell with them wherever they go. The devils besought the Lord not to cast them into the abyss; for they asked for this, deeming it to be a punishment for them to be cast out of a place where they could injure men. Hence it is stated, They besought Him that He would not expel them out of the country."

>They have been reaching out from the darksome atmosphere for 500 years now, cutting deals with sorcerers to access and influence our realm. They want OUT... and they found a way, by manipulating one important sorcerer in the past, John Dee. A deal was cut--the Royalty of the world would be given the secrets of the gods, if they, in turn, directed human society to find a way to release them from their exo-space prison. It would take mankind centuries to develop... but now it is here. We call it, "5G" and the "Internet of Things." This isn't going to unite the world, it's going to open that cell door and let loose the dogs of war. This is the tip of the iceberg I found, that is now costing me my life.

Fugg messed up the subject line

After surviving cancer, the anonymous author published new updates:
>I have been using the RS2 ([email protected] http://reciprocal.systems/) model to analyze the physical properties of exo-space, so I can verify the "natural consequences" that come with it. (Note that you cannot use Larson's work, as he concentrated solely on linear space--he did not consider the yin or angular component to things).

>Our normal reality is based on a yang/linear location (coordinates of where something is in space and the lines that draw an object), coupled to a yin/angular structure (the atomic system, composed of electric and magnetic rotations that determine the properties of the atom). Exo-space is the reverse of this structure, where location is determined by angular relationships (called "shifts" and "turns" in projective geometry). Structure is determined by linear relationships, which means that all exo-space structure is nonlocal -- the properties of an object in exo-space are analogous to field effects, so when we view an object in exo-space, like an Archon, they appear misty and ghost-like, with no hard form.

>Note this is different than cosmic manifestation, which still keeps the location-yang, structure-yin relationship, but with the aspects of space and time flipped. Exo-space is the NEGATIVE of space, not its reciprocal, but still shares some of the properties of its reciprocal.

>This throws some limitations on those trapped inside an exo-space prison, also noted by St. Thomas... bad guys, like the Archons manifest as demons, being nonlocal to our spacecannothave direct influence over anything physical. As St. Thomas discusses, they can only perpetrate TWO of the sins recognize by the church: PRIDE and ENVY. So those little whispers in the ears from darklighers and the like will always push towards these sins, which manifest as MATERIALISM. You can see the widespread influence of these sins on global society, primarily due to marketing... they want to make you envious of what your neighbors had, and take excessive pride in yourself for having the best smartphone in the area.

>But there is one common factor to both linear and angular speeds: vibration. A vibratory system of sufficient magnitude and structure will cross both realms and allow inversion to take place. In terms of Doctor Who (Tom Baker, "Full Circle") it creates a "charged vacuum emboitment." Structures that pass through this CVE are restructured into the negative form--and this is the danger. It opens a door between the realms where things can pass without being distorted. And remember--this door goes both ways, what is now in can come out, and what is now out can be thrown into that prison.

>Global implementation of 5G wifi seems to have all the characteristics of a system to form a CVE. This is not good.

>[.....] Visibility (of daemons) will continue to increase as Wi-Fi dominates our lives. 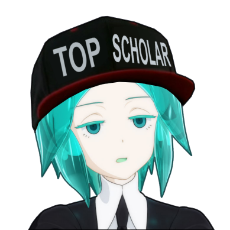 This single article DESTROYS pro-5G kykes and their subhuman lackeys: 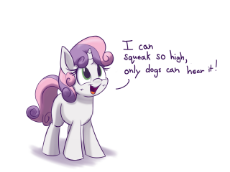 This smörgåsbord of schizoposting reads like someone who has no conception of what they are talking about (the occult) deciding to smash together something else they have no conception about (technology) in both an exercise in classic apophenia and an attempt to appear more intelligent than they actually are.

>>102690
>1. 5G Danger: Hijacking Your Sweat Duct Antennae
>“[The 5G frequencies] will zap [us] with wavelengths that will interact with the geometrical structure of our skin … We found that sweat ducts work like helical antennas … the sweat duct was an integral part of the mechanism for the absorption of energy, electromagnetic, between 75-100 GHz, and that if you changed the character of the sweat duct, i.e. made it work, you could actually change that absorption at some point, and if you could do that you could trace how a person is under stress.“
Congratulations, you've discovered the mechanism behind the Active Denial System.
>The ADS works by firing a high-powered beam of 95 GHz waves at a target, which corresponds to a wavelength of 3.2 mm.[13] The ADS millimeter wave energy works on a similar principle as a microwave oven, exciting the water and fat molecules in the skin, and instantly heating them via dielectric heating
https://en.wikipedia.org/wiki/Active_Denial_System
Too bad no 5G transmissions occur above 52.6 GHz. https://en.wikipedia.org/wiki/5G_NR_frequency_bands
But hey, no need to mention that! That might make our tenuous connections look unfounded or something!

Might come back to this later, but getting something so fundamentally wrong in the first point is pretty much grounds for outright dismissal in my books.
Anonymous
Tue, 22 Oct 2019 09:36:57 GMT
8FWVH
?
No.118018
Do the bird sacrifices please the daemons?

>Multiple Birds Mysteriously Falling From the sky Outside a Hospital in Coventry, UK!
>Birds don’t like the new 5G technology.
>They just fall from the sky!
https://strangesounds.org/2019/10/coventry-birds-fall-from-sky-5g-video.html