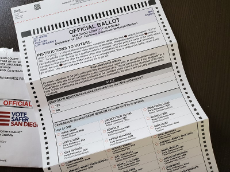 >With Gov. Gavin Newsom’s fate at stake, Californians on Tuesday cast the last of the ballots that will decide whether he continues to lead them or if the nation’s most populous state veers in a more conservative direction amid anger over his actions during the COVID-19 pandemic.
>Newsom, a Democrat who is leading in polls, is only the fourth governor in U.S. history and the second in California to face a recall. He was elected in a landslide less than three years ago.

>Newsom got a final push late Monday from President Joe Biden, who warned that the contest could shape the country’s direction on the pandemic, reproductive rights and the battle to slow climate change. The results also are likely to influence the 2022 midterm elections, when control of Congress will be in play again. The party that controls the White House historically loses seats in midterms.
>Elder staged his capstone rally in nearby Orange County, where he urged supporters to reach out to friends and neighbors to vote. The GOP will need a heroic Election Day turnout to catch Democrats, who have been turning in mail ballots in larger numbers. Nearly 8.6 million of California’s 22 million voters already have cast mail-in ballots.

>California voters have just two questions on Tuesday’s ballot: Should Newsom stay in office? And if not, who should replace him? There are 46 replacement candidates to choose from. If voters keep Newsom, the results on the second question are irrelevant.

>Newsom’s ouster would be a stunning rebuke in California, where the Democratic Party controls every statewide office and dominates the Legislature and the congressional delegation.
https://archive.vn/8MZrN

Results can be viewed here as they come in (Polls close at 11 p.m. Eastern time):
https://www.nytimes.com/interactive/2021/09/14/us/elections/results-california-recall.html 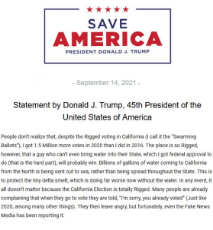 In case you have nothing to do and want some entertaining about this shitshow:

And then there's the pressing issue of feds.
The only way out is to dig the hole deeper.
The US is just as corrupt as every country south of the Rio Grande and Africa, but they all have more freedom.
Why? Because their populations are astutely aware that their governments are corrupt, and therefore ignore and avoid local government interactions. 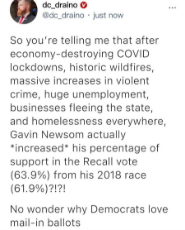 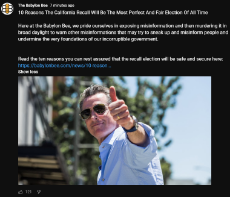 Protip: Simple messages that tell the truth, like the following.
It will be tough, but I'll take your guns when I'm ordered to
Next to stencil art of a Superman cop.
Anonymous
Thu, 16 Sep 2021 03:53:19 GMT
7ce4d5c
?
No.319787
>>319722
I like once in a blue moon actually come here because it is so slow and news doesn't populate nearly as much as fast, but on the otherhand, I have shyed away from all the pol news BS because it is the same stories on repeat over and over. With this Newsom story, I was right. Once more nothing changes, and once more, no one does a thing to invoke change. Well not really, at the least we can look towards Texas becoming a blue state when all the Commiefornians flock to all the major Texan cities, hope you like your rainbow sidewalks, because I guarantee there be more of them.

>>319794
>It hasn't happened in the past century
Looks like someone has a bad case of the bundays.
Off hand, all the other instances resulted in massacres or enforcers getting more power.